A company memo on Tuesday informed the staff that NYU Langone would “provide vaccines for Bloomberg employees who meet the eligibility requirements.” 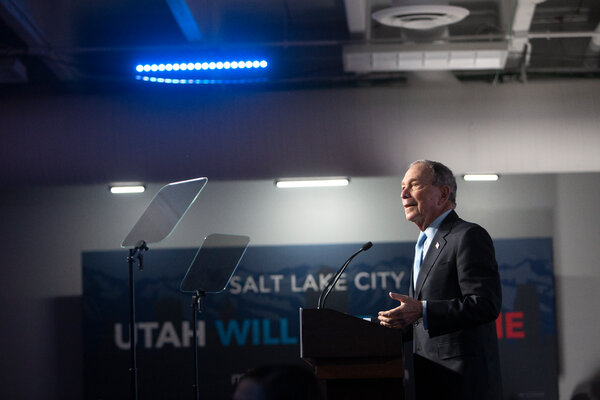 Bloomberg employees were told of the arrangement in an internal memo on Feb. 16. On Tuesday, as New York adults ages 30 and older became eligible for vaccination, Bloomberg’s head of human resources, Ken Cooper, sent a second email to the staff on the matter under the subject line “*URGENT* Covid-19 vaccines in New York.”

“NYU Langone has informed us that they are able to provide, in limited quantities each week, vaccines for Bloomberg employees who meet the eligibility requirements,” Mr. Cooper wrote in the email, which was obtained by The New York Times.

The email on Tuesday informed staff members that registration instructions would be sent to them after they submitted a ticket on the company’s financial terminal system. The memo added that only Bloomberg employees were eligible under the plan, not their dependents.

“Given the complexities around vaccine supply and distribution, we still encourage you to do everything possible to obtain an appointment on your own if you wish to receive the vaccine and are eligible,” the email said. “It’s possible that these appointments could come through for you sooner than those that become available via N.Y.U.”

Mr. Bloomberg has given billions of dollars to environmental, education, public health and other causes, including gifts amounting to more than $3 billion to his alma mater, Johns Hopkins University.

His philanthropic arm has made at least two gifts to New York University. The university’s Robert F. Wagner Graduate School of Public Service announced on March 2 that it would receive a $25 million donation from Bloomberg Philanthropies. The gift was made for a fellowship in the names of Mr. Bloomberg’s daughter Georgina and his mother, Charlotte. In 2017, Mr. Bloomberg’s philanthropic arm gave nearly $6 million to establish an environmental law center at the New York University School of Law.

NYU Langone Health has “formal corporate partnerships with organizations, school districts and municipalities for whom we serve as a preferred provider and offer corporate wellness programs in addition to facilitated access to our services,” a spokeswoman for the hospital system said in a statement. “As part of this partnership, we have helped to secure vaccines for Bloomberg employees who are our patients and in accordance with New York State guidelines.”

“Philanthropy is not tied to NYU Langone’s vaccine programs,” the spokeswoman added. Of Mr. Bloomberg’s March 2 donation, she said: “It is important to note that the gift made was to N.Y.U.’s Wagner Graduate School. It wasn’t made to NYU Langone Health or N.Y.U. Grossman School of Medicine. It was completely separate from our institution.”

New York residents over 30 became eligible for the vaccine on Tuesday, creating a rush to book appointments.

Mr. Bloomberg has told his employees that he expects them to return to the office once they are vaccinated. “As vaccines become available, we expect people to take advantage of the safety they provide and return to the office,” he wrote in a memo on Feb. 2, which was reported by Business Insider. “Any questions? I’m at my desk.”