Bethenny Frankel, the entrepreneur, investor, philanthropist, lifestyle influencer and New York Times bestselling author, is broadening her offerings on HSN. Frankel will introduce swimwear today under the Bethenny label, as well as launching new items under Skinnygirl Eats on June 18.

Over the years, Frankel has sold multiple products on HSN, ranging from sweaters, jackets, denim and tops under the Skinnygirl label to eyewear under the Bethenny label.

Frankel said she likes having two different labels to manufacture different product lines and has always been a fan of the home shopping concept.

“Years ago, when I was selling my book and later selling a blender, I was able to sell QVC. And even years before that, when I was a natural food chef, I was begging to get on QVC and HSN. It just seemed just the pinnacle of success because of the volume they do. Over the years, it’s always been a great, coveted spot to have real estate there. Not just to be there for six minutes, but actually to be someone who has a home there,” Frankel said.

In the past few years, Frankel’s offerings on HSN have grown significantly.

“HSN really wanted to invest in me, and I wanted to invest back in them. It’s been a really circular relationship. There’s a lot goes on behind the scenes in how they invest in a talent, and the talent has to invest back in them,” she said. She recalled that she used to go to HSN headquarters in St. Petersburg, Fla., and was in awe of “the volume you can do in such a short period and the trust you can establish with the customer.”

Rachel Ungaro, vice president, apparel for HSN and QVC at Qurate Retail Group, said of Frankel, whose Skinnygirl line has been sold on HSN since the fall of 2018, “The minute you talk to her you get swept up in the world of Bethenny, which is one of the reasons we love her so much. Not only does she have that personality on air, but she has that same level of enthusiasm and passion when we’re working on her Skinnygirl brand. She’s passionate about her category, in general, and she’s passionate about denim, and passionate about fit, and how things look on all shapes and sizes.”

Ungaro continued that Frankel’s move into swimwear was a natural: “She’s a big swim wearer on her own. Launching her swimwear really seemed like the next step. It’s totally different than anything we’ve ever done. We don’t carry a lot of swim at HSN. We love launching it with somebody that our customer really relates to and loves.”

Frankel is also known for her denim, Ungaro noted, which is one of her hero categories. Novelty knit tops have been very strong, and she has a subbrand called Mouji, a cozy sweater line, which has done very well. “She’s all about the great tops that go with amazing jeans,” Ungaro said.

Frankel said her two labels reflect different parts of her life, and the swimwear will be featured on the HSN Web site under Bethenny Swimwear.

“I was in my 30s when I created Skinnygirl, and I was 50 when I created Bethenny. It’s a business from a mom, philanthropist, business woman, problem solver and it’s more elevated,” said the 50-year-old entrepreneur. She said the Bethenny line isn’t necessarily for an older customer, but it’s a more sophisticated product.

There are three swimwear styles at the launch — a high-waisted bikini bottom ($49.90), a scoop-neck bikini top ($49.90) and a one-piece with removable straps and belt ($99.90). Colors include black, ruby red, midnight blue and cocoa and sizes range from XS to 3X. “I personally miss the classics,” said Frankel, adding there are no prints or gimmicks. “Let a woman’s body speak for itself,” she said. Eventually, the line will be expanded and cover-ups will be added.

The swimwear, which is manufactured by Burch Creative Capital (whose founder is J. Christopher Burch), is solution-based using compression swim fabric. Frankel described it as “slimming and smoothing, and very classic and elegant.” 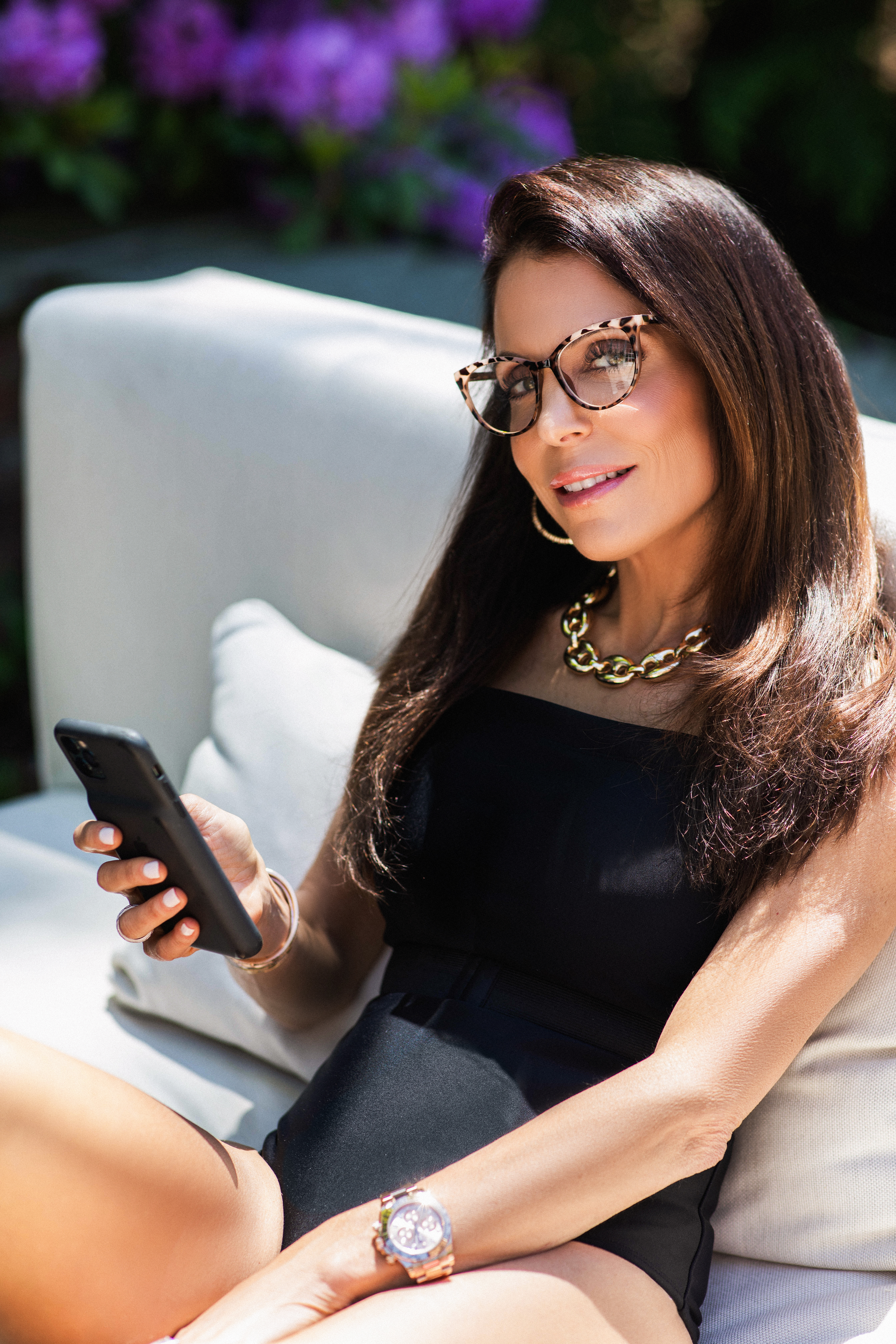 Bethenny Frankel in the one-piece suit for HSN. courtesy shot.

Frankel said she was personally involved in the creative process. “I’m very, very involved. Sometimes I’ve had partners who have shown me something the day before I had to sell it. You can’t go on television and sell something that you don’t personally love. Things I love really sell really well,” she said.

Frankel will appear on HSN on Thursday during the 7 a.m. hour for the “Obsessed with Style” program and again from 6 to 7 p.m. for a Skinnygirl branded hour. She will also be on during the 8 p.m. hour with “Summer Style Checklist.” Frankel will be remote from her own studio, while the HSN hosts and models are in the St. Petersburg studio.

In August, she will also add readers to her Bethenny eyewear line, which includes nine designs ranging from aviators ($28.99) to oversized cat-eye sunglasses ($28.99), along with five new sunglass silhouettes.

Frankel made a name for herself appearing on such TV shows as “Shark Tank,” “The Apprentice: Martha Stewart” and “The Real Housewives of New York City.” She’s also very passionate about philanthropy. Her B Strong disaster relief initiative distributed more than $19 million in aid and personal protective equipment during the COVID-19 crisis.

Bethenny Frankel Talks Bras and the Future of Skinnygirl Jeans