Bryan Fogel’s first documentary, “Icarus,” helped uncover the Russian doping scandal that led to the country’s expulsion from the 2018 Winter Olympics. It also won an Oscar for him and for Netflix, which released the film.

For his second project, he chose another subject with global interest: the killing of Jamal Khashoggi, the Saudi Arabian dissident and Washington Post columnist, and the role that the Saudi crown prince, Mohammed bin Salman, played in it.

A film by an Oscar-winning filmmaker would normally garner plenty of attention from streaming services, which have used documentaries and niche movies to attract subscribers and earn awards. Instead, when Mr. Fogel’s film, “The Dissident,” was finally able to find a distributor after eight months, it was with an independent company that had no streaming platform and a much narrower reach.

“These global media companies are no longer just thinking, ‘How is this going to play for U.S. audiences,’” Mr. Fogel said. “They are asking, ‘What if I put this film out in Egypt? What happens if I release it in China, Russia, Pakistan, India?’ All these factors are coming into play and it’s getting in the way of stories like this.”

“The Dissident” will now open in 150 to 200 theaters across the country on Christmas Day and then become available for purchase on premium video-on-demand channels on Jan. 8. (Original release plans called for an 800-theater release in October, but those were scaled back because of the pandemic.) Internationally, the film will be released in Britain, Australia, Italy, Turkey and other European nations through a network of distributors.

It is a far cry from the potential audience it would have been able to reach through a service like Netflix or Amazon Prime Video, and Mr. Fogel said he believes it is also a sign of how these platforms — increasingly powerful in the world of documentary film — are in the business of growing their subscriber bases, not necessarily turning a spotlight on the excesses of the powerful.

For his film, Mr. Fogel interviewed Mr. Khashoggi’s fiancée, Hatice Cengiz, who waited outside the Saudi Arabian consulate in Istanbul in 2018 while the murder took place; The Washington Post’s publisher, Fred Ryan; and multiple members of the Turkish police force. He secured a 37-page transcript made from a recording of what happened in the room where Mr. Khashoggi was suffocated and dismembered. He also spent a significant amount of time with Omar Abdulaziz, a young dissident in exile in Montreal who had worked with Mr. Khashoggi to combat the way the Saudi Arabian government used Twitter to try to discredit opposing voices and criticism of the kingdom.

“The Dissident” landed a coveted spot at the Sundance Film Festival in January. The Hollywood Reporter called it “vigorous, deep and comprehensive,” while Variety said it was “a documentary thriller of staggering relevance.” Hillary Clinton, who was at Sundance for a documentary about her, urged people to see the film, saying in an onstage interview that it does “a chillingly effective job of demonstrating the swarm that social media can be.” 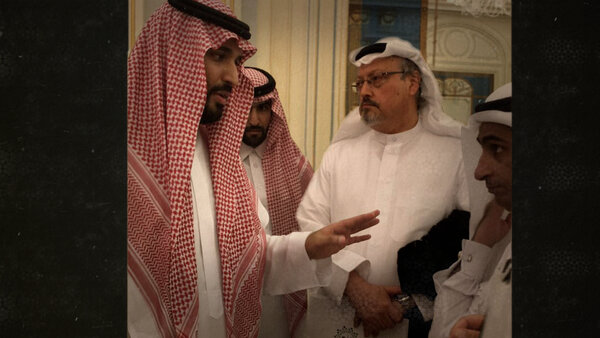 The only thing left was for Mr. Fogel to secure a sale to a prominent streaming platform, one that could amplify the film’s findings, like Netflix did with “Icarus.” When “Dissident” finally found a distributor in September, it was with the independent company Briarcliff Entertainment.

Mr. Fogel said he made Netflix aware of his film while it was in production and again months later when it was accepted into Sundance. “I expressed to them how excited I was for them to see it,” he said. “I heard nothing back.”

Reed Hastings, the chief executive of Netflix, was at the film’s Sundance premiere, but the company did not bid on the film. “While disappointed, I wasn’t shocked,” Mr. Fogel said. Netflix declined to comment, though a spokeswoman, Emily Feingold, pointed to a handful of political documentaries the service recently produced, including 2019’s “Edge of Democracy,” about the rise of the authoritarian leader Jair Bolsonaro in Brazil.

Amazon Studios also declined to bid. Footage of Jeff Bezos, Amazon’s chief executive who privately owns The Washington Post, is shown in the film. Amazon did not respond to a request for comment. Fox Searchlight, now owned by Disney, didn’t bid. Neither did Neon, the independent distributor behind last year’s Oscar winner “Parasite” and that often acquires challenging content.

“What I observed was that the desire for corporate profits have left the integrity of America’s film culture weakened,” said Thor Halvorssen, the founder and chief executive of the nonprofit Human Rights Foundation, who financed the film and served as a producer.

Documentaries are not normally big box office draws, so they have traditionally found their audiences in other places. PBS has long been a platform for prominent documentaries, but the rise of streaming has made companies like Netflix, Amazon and Hulu very important to the genre. But as those companies have grown, their business needs have changed.

“This is unquestionably political. It’s disappointing, but these are gigantic companies in a death race for survival,” Stephen Galloway, dean of Chapman University’s film school, said. “You think Disney would do anything different with Disney+? Would Apple or any of the megacorporations? They have economic imperatives that are hard to ignore and they have to balance them with issues of free speech.”

”The Dissident” is not the only political documentary that has failed to secure a home on a streaming service. Earlier this year, Magnolia Pictures, which has a streaming deal with the Disney-owned Hulu streaming service, backed out of a deal with the makers of the documentary “The Assassins,” which tells the story of the poisoning of Kim Jong-nam, the half brother of the North Korean leader Kim Jong-un. The film’s director, Ryan White, referenced the Sony hack in an interview with Variety, and chalked up the “bumpy road” of U.S. distribution to corporations feeling they “could be hacked in a way that could be devastating to them or their bottom line.”

Netflix was eager to have “Icarus” several years ago, purchasing the film for $5 million after it debuted at Sundance in 2017. “Fogel’s incredible risk-taking has delivered an absorbing real-life thriller that continues to have global reverberations,” Lisa Nishimura, who was then Netflix’s vice president of original documentaries, said in a statement at the time. But Mr. Fogel wonders if the company would be as excited about that film now.

In November, Netflix signed an eight-picture film deal with the Saudi Arabian studio Telfaz11 to produce movies that it said “will aim for broad appeal across both Arab and global audiences.”

The outcome for “The Dissident” has not been ideal, but Mr. Fogel is still hoping that people will see the film.

“I love Netflix and considered myself part of the Netflix family after our wonderful experience with ‘Icarus,’” he said. “Sadly, they are not the same company as a few years ago when they passionately stood up to Russia and Putin.”