The Food and Drug Administration’s decision on Monday to approve a new Alzheimer’s medication over the fierce objections of its scientific advisers sets into motion one of the most controversial drug introductions in years.

For its manufacturer, Biogen, the new drug is poised to be a blockbuster. For just about everyone else, it is likely to further inflate high U.S. health care costs.

And that is despite the fact that there is not much evidence the drug actually works.

More than six million Americans have Alzheimer’s and will be eligible to take the drug, which will be sold under the brand name Aduhelm and must be given as a monthly intravenous infusion. Biogen said it would charge an average of $56,000 a year per patient. There will probably be tens of thousands of dollars in additional costs for screening and monitoring patients.

The drug is all but certain to unleash a gusher of profits for Biogen — the drug is expected to become one of the best-selling pharmaceutical products in the world within a few years — as well as for the hundreds of clinics expected to administer the drug.

Those billions of dollars in anticipated costs are likely to be shouldered largely by Medicare.

The drug’s approval could drive up insurance premiums, according to health care policy experts. And it could add new out-of-pocket costs for some families that are already facing years of staggering costs for caring for loved ones with Alzheimer’s.

“This is really what keeps me up at night: A therapy of this cost is going to have enormous implications for everyone,” said Dr. Joseph Ross, a pharmaceutical policy expert at Yale who sits on a committee that advises Medicare on some coverage decisions. “And by everyone, I literally mean you, too. There’s going to be some 60- and 70-year-olds on your plan. If they start getting this treatment, you will see your premiums will go up.”

Biogen has said it expects more than 600 sites across the country to soon be ready to administer the drug. But experts predict that demand, including from patients who have not previously sought care for their cognitive problems, will outpace the supply of trained specialists, scanning machines and chairs in which patients receive infusions.

“I don’t think we’ll be ready on Day 1 by any stretch. It’s going to be a learning curve,” said Dr. Erik Musiek, who sees Alzheimer’s patients at the memory clinic at Washington University in St. Louis, where new patients already have to wait up to six months for appointments.

Aduhelm is a monoclonal antibody that targets a protein in the brain that clumps into plaques in people with Alzheimer’s. It is the first new Alzheimer’s treatment since 2003 and the first ever approved to attack the biological underpinnings of the disease, instead of merely postponing symptoms. 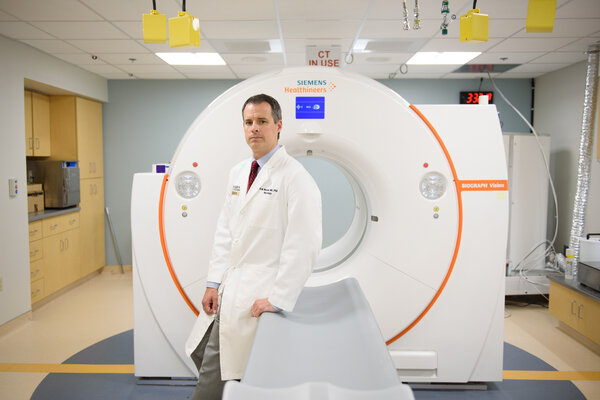 But there is not strong evidence that the drug helps patients, and it comes with potentially serious side effects. Prominent experts, including the F.D.A.’s independent advisory committee and a professional society representing geriatricians and other health care providers for older adults, urged the agency not to approve the drug.

“It’s completely unconvincing that we should be using it at all,” said Dr. Peter Bach, a drug pricing expert at Memorial Sloan Kettering Cancer Center. “In reality, we shouldn’t be paying anything. We should be continuing to research until we have drugs that are shown to be effective.”

Biogen’s $56,000 price tag is higher than many Wall Street analysts had expected. The company’s shares soared 38 percent on Monday.

The Institute for Clinical and Economic Review, which evaluates the value of medicines, has estimated that Biogen’s drug would be cost-effective only below $8,300.

The drug’s sales are expected to pick up slowly in its first months of availability, because of the challenges around administering it and because patients start out on a lower, less expensive dose.

But even if only a small fraction of people with Alzheimer’s begin taking the drug, it will be enormously lucrative. Analysts at Cowen said on Monday that they expected the drug to reach 8 percent of Americans with mild Alzheimer’s by 2025, yielding $7 billion in revenue.

In addition to the United States, Biogen has asked regulators in Australia, Brazil, Canada, the European Union, Japan and Switzerland to review the drug.

The U.S. approval is a crucial victory for a company that has been counting on Aduhelm to make up for stalled or declining revenue from its other products. Competitors last year introduced generic versions of Biogen’s multiple sclerosis drug, Tecfidera, causing the company to miss out on hundreds of millions of dollars in revenue from what had been its top-selling product.

The approval “completely transforms” Biogen, said Brian Skorney, an analyst at Robert W. Baird & Company, who is projecting that the drug will generate $7.5 billion in revenue in 2025. “This changes it from a declining revenue company to a growth company,” he said, and, in so doing, “opens up a bit of Pandora’s box” in terms of pricing and reimbursement.

While only patients with mild cognitive decline were enrolled in the clinical trials, the F.D.A. approved the drug for anyone with Alzheimer’s, a much broader group of patients than many experts were expecting.

Just how lucrative the drug will be for Biogen will depend on how many patients it can reach — and in what circumstances, and for how long, insurers are willing to pay for it.

Dr. Steve Miller, the chief clinical officer at the insurer Cigna, said on Monday that he expected his company and most of its peers would pay for the drug only for patients with mild cognitive symptoms and higher-than-normal levels of the protein amyloid in their brains.

“There’s just no data that more advanced patients will benefit,” he said.

Dr. Miller said he was disappointed that the F.D.A. had made so many patients eligible. “You’re leaving the tough decision-making about who should be covered to the individual payers,” he said.

The most important payer will most likely be Medicare’s Part B program, which covers drugs that are administered to seniors in doctors’ offices and other outpatient settings.

A spokeswoman for the Centers for Medicare and Medicaid Services said last month that the agency would provide more information in the future if the F.D.A. approved Biogen’s drug. The agency “understands that it is vitally important for our beneficiaries to have access to the latest therapies and wants to ensure that Medicare pays for these treatments appropriately,” the spokeswoman said.

If Medicare covers the drug, it will very likely become the Part B program’s most costly medication within a few years. In 2019, the Part B program’s biggest drug expenditure, at $2.9 billion, was for Eylea, which treats macular degeneration, followed by $2.7 billion for the cancer drug Keytruda.

The program does not generally pay for the PET scans that were used in clinical trials to detect whether patients had amyloid in their brains. While the F.D.A. is not requiring them, such scans are expected to be widely used to help screen patients who might take the drug. Spinal taps, a procedure in which a needle is inserted into the lower back to collect fluid, may also be used in some cases.

Insurers also might balk at paying for some associated costs. Those include regular M.R.I. scans to monitor for potential side effects, like brain swelling or bleeding that occurred in 40 percent of clinical trial participants. These effects, while often mild, can be serious.

Dr. Miller of Cigna said such additional costs could come to about $30,000 per patient in the first year of treatment, plus about half that each subsequent year.

To the extent that those additional costs are covered by insurance, they would probably be a financial boon for so-called memory clinics that see patients with dementia.

Such clinics, typically part of larger health systems or medical centers, have historically struggled to make money because of the nature of their services, such as cognitive testing, caregiver support and education. They often rely on research funding and philanthropy to make up for shortfalls in clinical revenue.

Money-generating procedures like M.R.I. scans could change that. “People will start expanding their clinics if there’s money to be made,” said Dr. Musiek of Washington University.

In the short term, though, the anticipated demand for the new drug is likely to produce logistical headaches and delays.

In Las Vegas, the Cleveland Clinic’s Lou Ruvo Center for Brain Health is projecting that nearly 800 people, or more than half of the patients in its cognitive disorders program, might be screened to get the drug. But the center has just six infusion chairs and one PET scanning machine, which can handle two or three patients a day.

“We don’t have probably enough diagnostic capacity at this point, and we don’t have enough infusion chairs, and we don’t have a fast way to get a diagnosis,” said Dr. Aaron Ritter, a neuropsychiatrist at the center. “We have to change the entire way that we would deliver care.”