Until June, MacKenzie Nicholson worked for the American Cancer Society, lobbying state and federal legislators to increase funding for cancer research. She lost her job after the pandemic forced the organization to cancel events across the country, eroding its revenue.

Ms. Nicholson, 30, received roughly $5,000 in severance pay, so she did not qualify for unemployment benefits until that money ran out in August. By then, a $600 weekly federal supplement to unemployment insurance had expired, so she received only New Hampshire benefits: $384 a week after taxes.

Her husband was furloughed as a Jeep service manager in late March, but was called back in April. Even with paychecks of $1,000 a week, his income is not enough to cover their monthly expenses, including a $2,118 mortgage payment, car payments totaling $666, and student loan payments adding up to $500.

On Sept. 10, she received $1,620 from Lost Wages Assistance, a short-term federal supplement, which allowed her to pay the September bills.

To make ends meet in October, she plans to pick up shifts for DoorDash, Uber and Lyft. But with her husband back at work and their children, 3 and 7, needing supervision and help with Zoom school all day, she will have to work those shifts in the evenings. 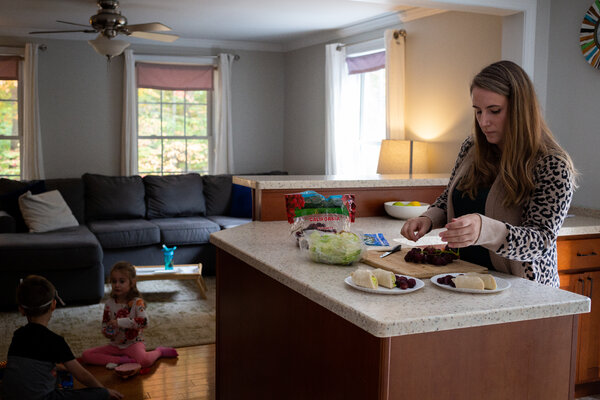 It’s hard for her to square the anxiety over meeting basic needs with the life she had a year ago, when she and her husband had just bought their first home, and their family seemed settled and secure.

“The winter’s coming and we have oil heat, and I don’t know if we’ll be able to pay for that,” she said. “At least we have a fireplace.”