U.S.-China tensions, the United Nations, whales in Tasmania: Here’s what you need to know.

We’re covering the latest measures to fight the virus in the Philippines, global worries about spiraling U.S.-China relations and the prisoners who held up Afghan peace talks. 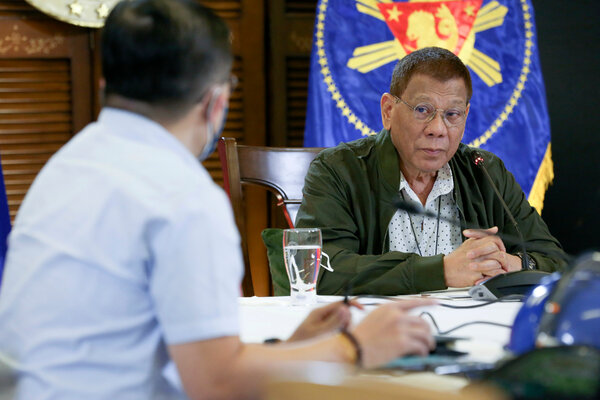 Philippines under state of calamity for another year

President Rodrigo Duterte has extended a state of calamity in the country by a year, allowing the government to draw emergency funds more quickly in the pandemic. The special measures will also allow Mr. Duterte to harness the police and military to maintain law and order.

Speaking at the United Nations General Assembly, he dismissed concerns about human rights under his government. “Interest groups have weaponized human rights — some well-meaning, others ill-intentioned,” he said.

Earlier this week, the president assailed critics who said his government had not done enough to contain the outbreak, one of the worst in Southeast Asia. “What ‘enough’ do you want? There are hospitals, beds and funeral parlors. Everything is there,” he said in a televised address late Monday.

Details: The Philippines has more than 291,000 confirmed coronavirus cases. It was placed under a state of calamity in March, a designation that also allows officials to control the prices of basic commodities.

Prime Minister Boris Johnson said Britain had reached a “perilous turning point” in the pandemic, with a surge of cases. He announced new measures, like greater penalties for those who defy restrictions, that could stay in place for the next six months.

The death toll in the U.S. from the coronavirus passed 200,000 — more deaths than in any other country.

The awards ceremony for this year’s Nobel Peace Prize has been canceled because of the pandemic.

Prime Minister Jacinda Ardern of New Zealand apologized after being photographed with supporters without social distancing or masks last week while on the campaign trail, drawing criticism from the public and opposition politicians.

The social media network said it took down fake pages created in China aimed at influencing the presidential election in November.

It’s the first public disclosure of Chinese efforts to meddle in the election, though relatively minor and not directly attributed to the government in Beijing. Posts about the elections were both for and against President Trump and former Vice President Joe Biden. “They were focused on driving division,” said the head of security at Facebook.

Details: The posts, from a network of 155 accounts, 11 pages, nine groups and six Instagram accounts, focused on American and Philippine politics, and Chinese activity in the South China Sea.

Related: If elected, Mr. Biden could be, from the Chinese vantage point, an even greater challenge than Mr. Trump. He has vowed to take a harder line on climate change and China’s crackdowns on ethnic minorities and Hong Kong, and he is seen as more likely to mobilize nations to take joint action to pressure China.

The leaders of the U.S. and China squared off at the United Nations during the annual General Assembly meeting on Tuesday. The U.N. chief warned that their rivalry posed a risk to the world.

President Trump blamed China for the coronavirus pandemic and demanded that the U.N. hold the country accountable. President Xi Jinping of China framed the virus as everyone’s challenge and lauded his country’s response. “Any attempt at politicizing or stigmatizing this issue must be rejected,” Mr. Xi said.

In his opening remarks, Secretary-General António Guterres warned that the world was “moving in a very dangerous direction” with U.S.-China tensions. Still, China’s leader emphasized that Beijing had “no intention to fight either a cold war or a hot one with any country.”

Climate: In a pointed message to the U.S., Mr. Xi pledged that China would adopt much stronger climate targets and achieve what he called “carbon neutrality before 2060.” If realized, the pledges would be crucial in the fight against climate change.

Recap: The United Nations is marking its 75th anniversary this year against a backdrop of cascading crises. Because of the pandemic, none of the leaders have traveled to the New York headquarters to deliver their addresses. The speeches are being delivered via prerecorded videos.

The men who held up Afghan peace talks

A young Afghan police officer killed two U.S. Marines in 2011, and although he did not appear to be acting on behalf of the Taliban, the insurgent group demanded his release from prison. Mohammad Dawood, the officer, was one of just six prisoners — out of 5,000 released by the Afghan government — over whom a bitter disagreement almost derailed peace talks this month. Above, delegates in Doha, Qatar, on Sept. 12.

The U.S., France and Australia lobbied against the release of the six men, who had killed their citizens. Our reporters looked at Mr. Dawood’s case, which demonstrates the tough choices involved in trying to make peace in the middle of a bitter war.

U.S. Supreme Court: President Trump secured enough votes in the Senate to cement a conservative majority on the high court after Senator Mitt Romney said he supported filling the vacancy left by the death of Justice Ruth Bader Ginsburg.

Beijing crackdown: A Chinese court on Tuesday sentenced an outspoken Chinese property tycoon, who had called President Xi Jinping a “clown,” to 18 years in prison for corruption. The Communist Party has been cracking down on dissent among the elite.

Lanzhou taxi drivers: Officials in the northwestern Chinese city told taxi drivers to get rid of their tattoos, saying it could “cause distress” to women and children. The order has revived a debate over stigmatized body art.

Snapshot: Above, rescuers in Tasmania working to bring a pilot whale back to safety. About 270 of the whales somehow ended up stranded on a beach in the Australian state. Whale beachings are common in Tasmania, but this one is among the worst. About a third of the whales are believed to have died.

What we’re listening to: This Radiolab episode about falling. “For someone who has a fear of falling, an hour of listening about great falls — including Niagara Falls, myths about cats and love — makes the world seem a little less scary,” writes Remy Tumin, on the Briefings team.

Cook: This spinach-potato pie “feels like a great, cozy nurturing hug,” writes our food columnist Yotam Ottolenghi. “And that’s exactly what we all need right now.”

Read: If you’d like to learn more about Ruth Bader Ginsburg, the Supreme Court justice who died on Friday, these books are building blocks.

Watch: The sitcom “Derry Girls,” now streaming on Netflix, follows a teenager and her four hilarious friends in 1990s Northern Ireland. “All its characters, even minor ones like the priest, are finely, believably portrayed,” writes our reviewer.

Find fun while staying at home with our full At Home collection of ideas on what to read, cook, watch, and do.

Our Opinion section asked readers for contributions to this succinct storytelling. People all over the world wrote in with their six-word memoirs. Here are a few of our favorites.

I always wanted a small wedding.

My dad’s last breath, on FaceTime.

Learning to smile with my eyes.

My dog is tired of me.

Yes Netflix, I am still watching.

Thank you
To Theodore Kim and Jahaan Singh for the rest of the break from the news. You can reach the team at [email protected]

P.S.
• We’re listening to “The Daily.” Our latest episode is what the U.S. Supreme Court vacancy could mean for voters in swing states.
• Here’s our Mini Crossword, and a clue: Baby’s bed (four letters). You can find all our puzzles here.
• Our Tokyo bureau chief Motoko Rich joined BBC World News to talk about Yoshihide Suga, Japan’s new prime minister.