We’re covering estimates that show the true devastating scale of India’s Covid crisis and how the U.S. is marking one year since George Floyd’s killing. 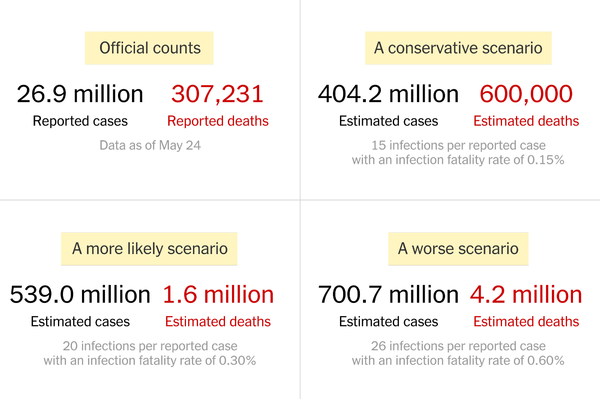 Last week, India recorded the largest daily coronavirus death toll for any country during the pandemic — a figure that most likely is still an undercount. The Times consulted more than a dozen experts to arrive at several possible estimates for the true scale of devastation from Covid-19 in the country.

The caseload: As of Tuesday, India had reported nearly 27 million Covid cases and 307,231 deaths.

What the data shows: Our best-case scenario assumes a true infection count 15 times the official number of recorded cases, and a death toll roughly double the official count, at 600,000 deaths. Our worst-case scenario, taking into account the shortage in oxygen and hospital beds, puts the estimated infections at 700 million, and deaths at 4.2 million.

The view from inside: Fear, grief and boredom pervade the lives of those caught in India’s outbreak. We asked our readers in India to describe their lives: “We’re all terrified and burnt out,” one wrote.

Modi on the offensive: Indian police visited Twitter’s office in New Delhi as part of a crackdown on criticism of the government’s handling of the pandemic.

Moderna said that its vaccine is effective for 12- to 17-year-olds and that it will seek authorization from U.S. drug regulators.

For much of the pandemic, Taiwan was a sanctuary for performing artists. But now, as cases rise, cultural life has been brought to a halt.

One year after George Floyd

President Biden held a private meeting at the White House with George Floyd’s siblings and daughter on the anniversary of his death after a police officer pressed his knee into Floyd’s neck. His murder in Minneapolis spurred a U.S. reckoning on police brutality and global protests demanding racial justice.

The anniversary comes one month after the police officer, Derek Chauvin, was found guilty of two counts of murder and second-degree manslaughter. Biden has promised Floyd’s family that he will win passage of a police reform bill in his name, but he has so far failed to make good on that promise.

At George Floyd Square in Minneapolis, people laid flowers. Marches, memorials and prayer gatherings were planned across the U.S., from morning to evening, stretching from Portland to Louisville to New York.

Changes: Over the past year, more than 30 states and dozens of large cities have created new rules limiting police use of force. We look at the shift in policing. Most Black Americans say that the murder conviction of the police officer does not improve their trust in the justice system.

Disgusted by the brutality of President Aleksandr Lukashenko, Roman Protasevich embarked — at the age of 16 — on a life in opposition, spending parts of his 20s in exile in Poland and later Lithuania.

Over the past ten years, he has faced so many threats of violence, jail and family punishment from the country’s security apparatus that “we all sort of got used to them,” a fellow exiled dissident recalled. In November, the security services put him on a list of accused terrorists.

Our reporters looked at his life in the opposition movement, as authorities in Belarus released a video of his confession — under duress, his friends say.

Background: Roman was returning from a vacation in Athens with his girlfriend when he was snatched by Belarus security officials on the tarmac at Minsk National Airport on Sunday after his commercial flight home to Lithuania was intercepted.

The latest: Air France, KLM, Finnair Lufthansa and Austrian Airlines joined the list of airlines that have stopped flying over Belarus.

More than 200 people were injured yesterday in Malaysia’s largest city, Kuala Lumpur, when a train full of passengers collided head-on in a tunnel with another train on a test run.

Prime Minister Benjamin Netanyahu warned that Israel would launch a “very powerful” response to any new attacks by Hamas militants. He thanked the U.S. for bolstering air defenses during a diplomatic visit.

American troops are set to be out of Afghanistan by early to mid-July, ahead of President Biden’s September deadline, after the Pentagon accelerated the withdrawal.

President Biden will meet with Vladimir Putin, Russia’s president, in Geneva on June 16. The talks come at a time of high tension over Ukraine, cyberattacks and new nuclear weapons.

The military in Mali ousted the country’s interim civilian leaders, setting up a new crisis just nine months after the previous president was forced out in a military coup.

John Cena, the professional wrestler and a star of the film “F9,” the latest installment in the “Fast and Furious” franchise, apologized to fans in China after he referred to Taiwan as a country.

Myanmar’s ruling military junta has killed at least four poets and imprisoned more than 30 others since the Feb. 1 coup. After two poets were killed recently, a third one wrote: They shoot at heads. But they do not know. That revolution lives in the heart. Poetry and dissent have long been intertwined in Myanmar, our correspondent writes.

Lives Lived: Max Mosley, the former motor racing chief who sought to separate himself from his notoriously fascist British parents but became ensnared in legal battles later in life over a secretly recorded sex video. He was 81.

To help commemorate its 125th anniversary, The Times Book Review is highlighting some noteworthy first mentions of famous writers. You can find the full list here. Some of our favorites:

F. Scott Fitzgerald: In 1916, Princeton admitted only men, and they would often play women’s roles in campus plays. The Times featured a photo of Fitzgerald in character, calling him “the most beautiful showgirl.”

Ralph Ellison: In 1950, two years before the publication of “Invisible Man,” Ellison reviewed a novel called “Stranger and Alone,” by J. Saunders Redding. Ellison wrote that Saunders “presents many aspects of Southern Negro middle-class life for the first time in fiction.”

John Updike: An acclaimed short-story writer who had yet to publish a novel, Updike appeared in an advice article in 1958, encouraging parents to teach their children complex words. “A long correct word is exciting for a child,” he said. “Makes them laugh; my daughter never says ‘rhinoceros’ without laughing.”

This skillet dinner features chicken in a leek and farro pilaf. Roasted carrots make a nice side.

“Heaven,” Mieko Kawakami’s second book to appear in English, tells the story of two teenagers who find solace and meaning in the face of ruthless torment.

Search for coconut crabs on Makatea, an island in French Polynesia.

Here’s today’s Mini Crossword, and a clue: Make the case for (five letters).

P.S. Jack Nicas, one of our tech reporters, talked about his investigation into Apple’s relationship with the Chinese government with KCRW’s “Press Play,” CNBC and KQED.

The latest episode of “The Daily” is about a major U.S. free speech case that started with a cheerleader and a Snapchat post.