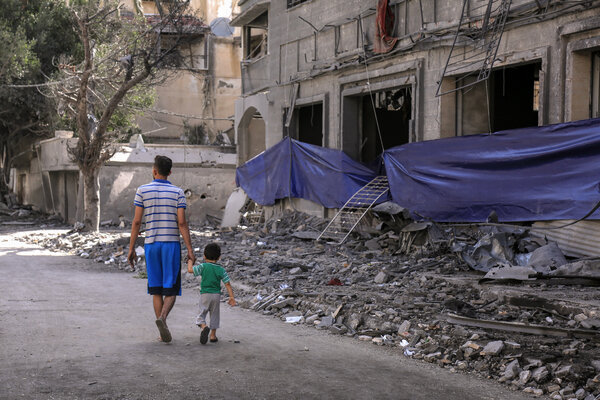 A humanitarian catastrophe in Gaza

Now into its second week, the battle between Hamas militants and the Israeli military has left Gaza facing a humanitarian crisis that touches nearly every one of its two million residents. Here are the latest updates.

Dozens of schools have been damaged or forced to close, there is a shortage of clean water, and fetid wastewater from destroyed sewage systems is coursing through the streets. In one of the most striking examples of the devastation, an Israeli airstrike damaged the only laboratory in Gaza that processes coronavirus tests.

Palestinians in Israel, the occupied West Bank and Gaza went on strike on Tuesday in a rare display of unity to protest their shared treatment by Israel. And Arabs across the world are using social media to speak out against Israel’s actions.

Diplomacy at work: There are some signs that Israel and Hamas may be edging toward a cease-fire, with Egypt and the United Nations working to “restore calm,” according to a person involved in the talks. E.U. foreign ministers called for an immediate cease-fire.

The U.S. stance: During a phone call with Prime Minister Benjamin Netanyahu of Israel, President Biden reportedly delivered a firmer message than he has done in public, warning that he could put off pressure from the international community and from Congress for only so long.

Explainer: The Times created a day-by-day reconstruction of the violence with maps, death tolls and satellite images.

A partial sense of normalcy is returning across Europe this week as governments lift some restrictions in response to a drop in coronavirus cases and as vaccine campaigns are picking up speed.

Different countries are easing those restrictions at a varied pace: In France, museums, movie theaters and retail stores will be allowed to reopen, although at limited capacity, while the Czech Republic has only just resumed dining outdoors. Spain lifted some restrictions last week, and Belgium resumed outdoor dining earlier this month.

Governments now have their eyes on June, when they plan to reopen even larger parts of their economies. But the B.1.617 variant first seen in India could derail these plans, with dozens of cases detected in Italy, France and Belgium. German health authorities said the variant accounted for around 2 percent of new infections reported at the beginning of the month.

By the numbers: Roughly 30 percent of people in Italy, France, Spain, Poland and the Czech Republic have received at least one dose of vaccine. That figure rises to 37 percent in Germany and 55 percent in Britain.

Related: The ritzy Italian island of Capri got first dibs on vaccines in an effort to compete against Greece and Spain for tourists, while on the mainland many older residents have yet to receive a first dose.

A new poll found 83 percent of people in Japan said they didn’t want the country to host the Olympics this summer, as cases remain high.

More than 1,000 doctors in India, and an untold number of other medical personnel, have died after being infected with the coronavirus.

Spain sent troops, military trucks and helicopters into its North African enclave of Ceuta after more than 8,000 people, including nearly 2,000 minors, crossed the border from Morocco. It was one of the area’s largest reported movements of migrants in recent years.

The sudden arrival of thousands of people, many of whom swam or arrived aboard inflatable boats, has created a humanitarian emergency in Ceuta, a Spanish autonomous city of 80,000 residents off the tip of Morocco.

Spanish television showed law enforcement officers carrying children in their arms, distributing blankets, providing water and evacuating others who had arrived in the area, many of whom appeared cold and exhausted. At least one person died during the crossing, according to Spanish and European officials.

Context: Spain and Morocco are involved in a deepening diplomatic spat over the hospitalization in Spain of the leader of a separatist movement that fights for Western Sahara’s independence from Morocco. It was not immediately clear if the spike in migration was linked to the dispute.

News From The U.S.

A state prosecutor said that the fatal shooting of a Black man in North Carolina by local sheriff’s deputies was justified.

The Biden administration said it would release three detainees at Guantánamo Bay to countries that agree to impose security conditions on them.

As the U.S. faces its next immigration crisis, interviews with advocates paint a picture of a shelter system for children with wildly varying conditions, some of which are far below the standard the Biden administration promised.

Climate change is forcing the National Park Service to decide which species and landscapes to save — and which to let slip away.

For years, Weed, Calif., rejected proposals to leverage the name and allow the sale of marijuana. But the town’s leaders have had a change of heart.

In Japan, a woman who overstayed her visa got sick and died alone in detention, causing criticism of the country’s treatment of migrants.

In 1944, a camera captured a two-second clip of nameless children on a train headed to a Nazi concentration camp. Dutch researchers recently identified about a dozen individuals from the footage, including two children — a brother and sister.

“Now I feel that I can shout from the roofs, I’m still here, the Nazis didn’t get me,” said Marc Degen, who was 3 years old at the time and who recently turned 80.

Twenty years on, “Shrek” is still a beloved, offbeat fairy tale whose characters and jokes continue to permeate pop culture. But at the time of its production, nobody at DreamWorks, then a relatively new animation studio, expected to have a hit on their hands.

The movie was a departure from other animated features, with a cheeky and crude sense of humor, often making fun of fairy tale tropes and loaded with pop culture references.

Yet “Shrek” went on to top the box office, spawn a billion-dollar franchise and win the first Academy Award for best animated feature — beating out Pixar. And it “defined the kind of films the studio would go on to make,” Gina Cherelus writes: offbeat stories with more of an edge.

Today, Shrek is ubiquitous in memes and on social media, together introducing the film to a new generation. Its soundtrack leaves an indelible footprint all its own. And arguments persist on whether the movie is a commentary on gentrification or racism — or simply the story of a farting ogre who gets his own, triumphant, happily ever after ending.

For more: Here’s Buzzfeed on how “Shrek” changed animated movies, and Inverse’s oral history of the film. And an alternative view from The Guardian.

Any type of dried noodles can work in this recipe for yo po mian, a staple from China’s central northwest.

“High on the Hog,” a new Netflix series about Black food history, illuminates the resilient, ingenious cooks who have shaped American cuisine since the arrival of the first slave ships.

Sinead O’Connor’s new memoir tells her side of the story. “It seems to me that being a pop star is almost like being in a type of prison. You have to be a good girl,” she told our reporter.

P.S. Motoko Rich, our Tokyo bureau chief, joined NPR and the BBC to discuss the upcoming Tokyo Olympics and the growing sentiment among Japanese people who say they want the Games canceled or postponed.

The latest episode of “The Daily” is about the U.S. economy.

Sanam Yar contributed reporting to today’s Arts and Ideas. You can reach Natasha and the team at [email protected].