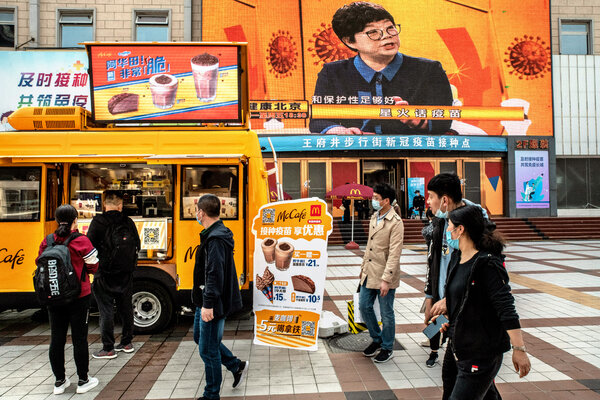 In Beijing, a Covid-19 vaccine will qualify you for a buy-one-get-one-free deal on ice cream cones. But in the town of Wancheng, officials warned parents that if they refused to get vaccinated, their children’s schooling, and future employment and housing were all at risk.

China is deploying a medley of tactics, some tantalizing and some threatening, to achieve mass vaccination. Its campaign got off to a slow start, but health officials are now picking up the pace, with a goal of vaccinating 560 million people — 40 percent of its population — by the end of June.

Though China has approved five homegrown vaccines, public anxiety about them remains. It doesn’t help that Chinese vaccine companies have been slow to release full data. The country’s near-total control of the coronavirus also makes many residents feel the shot is not so urgent.

Quotable: “They say it’s voluntary, but if you don’t get the vaccine, they’ll just keep calling you,” said one student in Beijing.

Details: Over the past week, China has administered a daily average of about 4.8 million doses, up from about one million for much of last month. Still, China lags far behind dozens of other countries. Experts have said they hope to vaccinate 10 million people a day.

The International Monetary Fund said it was upgrading its global growth forecast for the year to 6 percent from 5.5 percent, thanks to vaccinations of hundreds of millions of people.

New Zealand announced plans for a travel bubble with Australia that would open on April 19, allowing people to travel between the two countries without quarantining.

North Korea said it would skip the Tokyo Olympic Games this summer because of the coronavirus pandemic.

Saudi Arabia said it would restrict access to the Grand Mosque in Mecca during Ramadan to people who have been vaccinated or who have recovered from Covid-19.

Six weeks after a former legislative staff member accused a senior colleague of raping her in the defense minister’s office, thousands of women are standing up to share their stories, march for justice and demand change.

The realm of politics has become a focal point, as women of every party describe being groped, insulted, ignored and interrupted while trying to do their jobs. Whenever they have questioned such behavior, they have faced a barrage of attacks.

In interviews with our reporter, many described Parliament as a testosterone-fueled bunker.

Toxic environment: Sarah Hanson-Young, a Greens party senator, said male rivals would often shout across the chamber the names of men she was falsely accused of sleeping with. “Mansplaining, talking over women, inappropriate jokes, inappropriate touching — it was all that,” said Julia Banks, who left Parliament in 2019.

Context: In the past 20 years, Australia has fallen from 15th to 50th in the world for parliamentary gender diversity.

U.S. and Iran will work to return to nuclear deal

During talks in Vienna, the U.S. and Iran agreed through intermediaries to establish two working groups to try to get both countries back into compliance with the 2015 Iran nuclear deal.

The two groups have already begun their efforts, according to Mikhail Ulyanov, Russia’s envoy to the talks. He described the meeting as successful, but cautioned that restoring the deal would take time.

Challenges: U.S. officials estimate that Iran’s “breakout time” — the time necessary to assemble enough highly enriched uranium for a nuclear weapon — is now down to a few months. Even if there is agreement, verification will take some time given the technical complications and the absence of trust on both sides.

Young Chinese consumers are growing more nationalist and likelier to choose domestic brands, writes our New New World columnist. The anger over Xinjiang cotton has given Chinese brands another chance to win over consumers.

The health of the jailed Russian opposition leader, Aleksei Navalny, is declining, his personal doctor told journalists on Tuesday. The doctor was subsequently arrested. Prison doctors said that Mr. Navalny showed signs of a respiratory ailment.

Employees and associates of Prince Hamzah bin Hussein of Jordan were still being held in detention on Tuesday, their relatives said, casting doubt on claims by the royal court that it had resolved an unusually public rift. The government barred Jordanian news outlets and social media users from discussing the case.

Starbucks announced that it would stop using disposable cups in South Korea by 2025. Customers will pay a deposit for reusable cups that will be refunded when the containers are returned at contactless kiosks.

Millions of people driven from their homes during Syria’s 10-year civil war are crowded into an area of the country’s northwest controlled by a rebel group. Our reporter took a rare visit to Idlib Province, where shocked and impoverished Syrians are trapped in a murky and often violent limbo.

The origins of ‘cancel’

In the ’80s, a bad date inspired the musician Nile Rodgers to write a song. The track, “Your Love Is Canceled,” played on the idea of “canceling” a person for objectionable behavior, as Clyde McGrady writes in The Washington Post.

The phrase stuck around: Rappers and reality TV stars used it, and its popularity soared once Black users on Twitter began saying it. On social media at the time, canceling someone or something “was more like changing the channel — and telling your friends and followers about it — than demanding that the TV execs take the program off the air,” McGrady writes. That has changed in recent years.

Like a lot of Black slang, the term was appropriated by white people and has since deviated from its more innocuous origins. It became heavily politicized, applied to everything from public figures accused of sexual assault to the gender of Potato Head toys. It has followed a similar trajectory to the term “woke,” which Black activists popularized. That term has now evolved into a “single-word summation of leftist political ideology,” as Vox reports.

Though these are some of the latest terms lifted from Black culture, they won’t be the last. “One of the biggest exports of American culture,” a linguistics professor told The Post, “is African-American language.”

This egg salad sandwich from Konbi, a Los Angeles cafe, is as pretty as it is delicious.

In “Peaces,” by Helen Oyeyemi, the award-winning British-Nigerian author, young lovers and their pet mongooses take a Wes Anderson-style ride on a train to nowhere.

P.S. Frank Bruni is stepping down from his post as a Times Opinion columnist and joining Duke University in June. He will continue to write his newsletter.

The latest episode of “The Daily” is about online vengeance.

You can reach Melina and the team at [email protected].