We’re covering the sentencing of Aleksei Navalny, promising news about the Sputnik V vaccine and dueling impeachment filings in the United States. 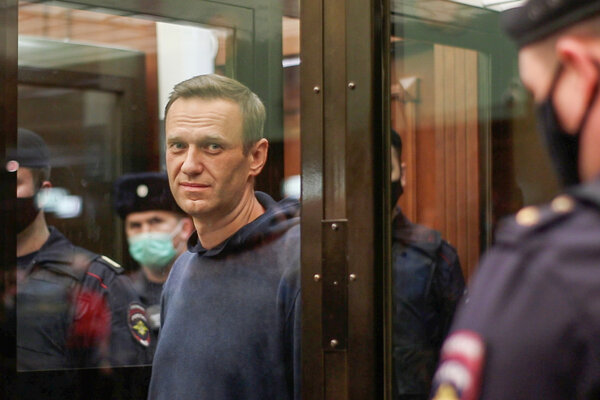 A Moscow court sentenced Aleksei Navalny, President Vladimir Putin’s loudest critic, to more than two years in prison on Tuesday for violating parole from a 2014 suspended sentence by not checking in with the authorities, including while he was in Germany recovering from being poisoned in August. The decision is likely to send him to a far-flung penal colony for the first time.

Mr. Navalny may seek to appeal the ruling, but the Russian authorities have signaled that they will not be swayed by public pressure to release him. Several of his top allies remain under house arrest.

“You cannot lock up the whole country,” Mr. Navalny told the court. He said the Russian president was angry at him for surviving after being poisoned with the military-grade nerve agent Novichok in August.

What’s next: Imprisonment will remove his direct voice from Russia’s political landscape, but it could energize his supporters and further rally opposition to Mr. Putin around the figure of Mr. Navalny.

Opinion: For the first time in close to a decade, Mr. Putin’s rule may be facing a sustained challenge, writes Tony Wood, the author of “Russia Without Putin.”

Vaccine news from around the world

The Sputnik V vaccine developed in Russia has been shown to be 91.6 percent effective against the coronavirus, appears safe and does not cause serious side effects, according to an analysis published in the British medical journal The Lancet. The requisite two shots of the Sputnik V vaccine cost $10 each, and they do not need deep cold storage.

AstraZeneca and Oxford University released data showing that a single dose of their vaccine provided strong protection in clinical trials when its second shots were delayed by at least three months, lending support to the strategy deployed by Britain and other countries to prioritize providing as many first doses as possible.

Separately, the upstart drugmaker Moderna has asked U.S. regulators to approve increasing the number of doses of coronavirus vaccine put into each vial from 10 to 15, allowing it to speed up production.

In an effort to clamp down on the variant first observed in South Africa, the British authorities dispatched mobile units and began testing for 80,000 residents living in areas where it had been detected.

Portugal, struggling to contain an outbreak that has led to Europe’s highest death rate, has rapidly filled the intensive care units established for Covid-19 patients. The government has called on other European countries for assistance.

The fast-spreading coronavirus variant first observed in Britain has gained a worrisome mutation that could make it harder to control with vaccines, Public Health England reported on Monday.

Former President Donald Trump’s lawyers denied on Tuesday that he incited the assault on the Capitol and argued that the Senate had no power to try a former president.

Mr. Trump’s words to supporters were protected by his First Amendment right of free speech, they said, adding that his comments were not meant as a reference to violent action, but were “about the need to fight for election security in general.”

In their own filing, House prosecutors argued that Mr. Trump was “singularly responsible” for the Jan. 6 rampage and a broader attack on democracy that showed he would do anything to “reassert his grip on power” if allowed to seek election again. The trial is set to start next Tuesday.

The Biden administration: President Biden continues to roll back his predecessor’s policies. He signed three executive orders yesterday on immigration, creating a task force to reunite several hundred families who were separated at the Mexican border and authorizing a review of Mr. Trump’s measures on asylum and legal immigration.

If you have 10 minutes, this is worth it

Writing the pandemic for the screen

The British screenwriter Steven Knight, above, unpacks his new quarantine film “Locked Down,” in which an unhappy couple (Anne Hathaway and Chiwetel Ejiofor) uses forced downtime to plot an improbable heist at Harrods, the London department store.

“When reality offers you such an unusual dislocation of what is normal, a situation that no one has been through before, it can be quite gleeful to write about — it’s like stepping on fresh snow,” he said.

Jeff Bezos: Amazon’s founder will step down as chief executive this summer and shift into the role of executive chairman. “Right now I see Amazon at its most inventive ever, making it an optimal time for this transition,” Mr. Bezos said in a statement.

“Captain Tom”: Tom Moore, the 100-year-old World War II veteran who raised $45 million for Britain’s National Health Service, died on Tuesday. He had been treated for pneumonia in recent weeks and tested positive for the coronavirus last month.

Eurozone economy: A double-dip recession in the European Union appears likely after the trade bloc reported a decline in economic output in the last quarter of 2020.

Snapshot: Soldiers waited outside a Hindu temple in Yangon, Myanmar, during a senior officer’s visit yesterday. With their coup on Monday, the country’s generals are ripping apart their prized project: a democratic front for a political system that still heavily favored them.

Brexit: New taxes, fees and red tape have left some of Britain’s art dealers worried they will go out of business. “Brexit has made the U.K. a faraway country,” said one Belgian collector, who quietly moved his collection after the Brexit referendum to avoid value-added tax payments.

What we’re reading: This contemplative Guardian long read about life with a vocal injury, and the extent to which how we speak reveals who we are.

Cook: This rich, savory pork and eggs in caramel sauce is a must-have on many southern Vietnamese Lunar New Year menus.

Listen: “The History of Sketch Comedy,” a new 10-part podcast by the actor and producer Keegan-Michael Key, is a surprising and earnest defense of a relatively unsung art form.

Read: Chang-rae Lee’s sixth novel, “My Year Abroad,” follows a college student who has been through a harrowing experience. Our critic calls it “considered and elegant, formal and philosophical.”

Make some time for yourself. At Home has our full collection of ideas on what to read, cook, watch, and do while staying safe at home.

There’s a common thread between the QAnon conspiracy theory, promotions of bogus health treatments and calls for violence based on false claims of election fraud: Facebook groups. Our On Tech newsletter compiled recommendations from experts for making these forums less toxic.

Stop automated recommendations. Facebook has said it will extend a temporary pause on computer-generated recommendations for people to join groups related to politics or health. Some experts said that Facebook should go further and stop computer-aided group suggestions entirely.

Provide more oversight of private groups. Two social media researchers, Nina Jankowicz and Cindy Otis, have proposed not allowing groups above a certain number of members to be private — meaning newcomers must be invited and outsiders can’t see what’s being discussed — without regular human review of their content.

Target the habitual group offenders. Renée DiResta, a disinformation researcher at Stanford, said that Facebook needed to “take more decisive action” against the groups that repeatedly engage in harassment. Jade Magnus Ogunnaike, from the civil rights organization Color of Change, said that Facebook should make the people responsible for reviewing material on the site — who are typically contractors — full-fledged employees.

That’s it for this briefing. Thanks for starting your day with The Times.

Thank you
Theodore Kim and Jahaan Singh provided the break from the news. You can reach the team at [email protected]

P.S.
• We’re listening to “The Daily.” Our latest episode is on President Biden’s climate plan.
• Here’s our Mini Crossword, and a clue: Light green (four letters). You can find all our puzzles here.
• Our Moscow correspondent Anton Troianovski joined Radio New Zealand and Channel 4 News to discuss Aleksei Navalny.