Running out of I.C.U. beds in South Korea.

We’re covering South Korea’s strategy for dealing with its most severe outbreak, an appeal to countries to lift travel bans on Britain and northern Sweden’s winter scenes. 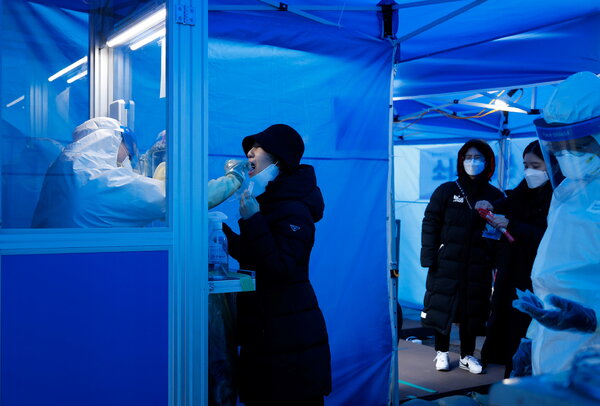 South Korea feels the strain of a severe outbreak

Officials are scrambling to secure more I.C.U. beds after an explosion of coronavirus infections. The country has aimed to provide patients with hospital beds within a day of getting a diagnosis. But as of Monday, only 42 beds were available nationwide, the government said, and several provinces had none.

A quiet fear has taken hold in South Korea, which for much of the year was held up as a model for the rest of the world. The government is weighing whether to impose a set of restrictions just short of lockdown for the first time if cases cannot be brought under control. Seoul banned gatherings larger than five people.

“Unlike in the past, this time the virus seems to pop up everywhere and no place is safe,” said Myeong Hae-kyung, a chief nurse in Daegu.

Context: High-risk places like gyms and bars are still closed, but restaurants, movie theaters and other businesses are open. The government has been wary of the economic effects of more restrictions, and has opted instead for ramping up testing and isolation.

Taiwan on Tuesday reported its first case of local coronavirus transmission in eight months, creating some anxiety on the island, which has so far avoided lockdowns and had only a handful of Covid-19 deaths.

France will fast-track citizenship for some 700 foreign frontline workers exposed to the virus, including health care workers, child care professionals, housekeepers and cashiers.

The U.S. Congress passed a $900 billion stimulus package to help Americans and businesses grappling with the economic and health toll of the pandemic.

The European Commission said bloc members should move swiftly to lift blanket bans and ensure essential travel with Britain, which is becoming isolated because of a newly discovered variant of the coronavirus that is spreading there. (There’s more on the new variant in our Back Story below.)

More than 50 governments have put in place measures to close the doors on Britain, with Nepal on Tuesday announcing a flight entry ban for people arriving from Britain.

The commission said it was important to maintain movement, and also suggested that countries should use rapid tests for truckers and haulers, rather than time-consuming P.C.R. tests. A bottleneck has built up at the British-French border since the weekend, when France moved to suspend all traffic between the two countries.

Related: In a roller coaster year of pandemic in Europe, the one constant has been frontline workers. These photographs tell the story of the infections that nearly broke Europe’s hospitals — exhausting, infecting and killing doctors and nurses.

India hails Kashmir election as normalcy in a dominated region

Votes were counted on Tuesday in the first local elections in Kashmir since the Indian government’s crackdown last year. Officials hailed the turnout as a sign that democracy had been restored in Kashmir, but that’s not the feeling on the ground.

The election to choose rural development officials was called suddenly, giving parties only a week to register candidates and prepare. Many prominent politicians remain in detention.

Results: India’s governing Bharatiya Janata Party, which unleashed 300,000 party workers into the region, won at least three seats and led in several development council races. A bloc of opposition parties, the Gupkar Alliance, appeared to come in the lead over all, according to preliminary results.

Our reporters visited Kashmir, part of a tightly controlled, rare media trip. They found a climate of fear and uncertainty with the pandemic hitting just as the security clampdown eased.

Quotable: “We’d never want B.J.P. to be in power in Kashmir,” said Kulsoom Chopan, 21, who warmed her hands over a wicker fire pot while waiting to vote.

Gibbons, the smallest of the apes, were once widespread across much of Asia, but deforestation and hunting have greatly reduced their numbers. In the 1990s and early 2000s, when displaying wild animals in bars was part of Thailand’s nightlife scene, young gibbons were sometimes taught to smoke, drink alcohol and eat human food.

Now, there is hope for the species. Our reporter looked at how at least a dozen rehabilitation centers in countries across Southeast Asia are undertaking the slow process of socializing and freeing gibbons recovered from the illegal wildlife trade.

Russian hack: The hackers who broke into U.S. government agencies got access to the email system used by the Treasury Department’s top leadership. It was the first detail of how deeply Moscow burrowed into the Trump administration’s networks.

Philippine police killing: Relatives of a woman and her son shot dead by an off-duty officer in the Philippines called for justice at their wake on Tuesday amid public outrage over the shooting, which went viral on social media after it was caught on camera.

Journalist murders: The number of journalists killed as a result of their work more than doubled in 2020, according to the Committee to Protect Journalists, to 30. Armed conflict and gang violence made Mexico and Afghanistan among the deadliest countries for reporters globally.

Snapshot: Above, the small hamlet of Kangos, Sweden. After his foreign assignments were canceled during the pandemic, the photographer refocused on his homeland and found mesmerizing beauty in northern Sweden. He also captured the boreal forests that have been ruthlessly clear-cut for biofuel and paper.

What we’re reading: This Columbia Journalism Review report about a reckoning at Magnum Photos, the world’s most prestigious photo agency. Amelia Nierenberg, on the Briefings team, says it was “really, really great and important reporting for the photography world.”

Cook: This tangy, turmeric-stained, sheet-pan vinegar chicken with crushed olive dressing makes the most of the bits left behind on the pan.

Watch: The new music documentary “Ariana Grande: Excuse Me, I Love You” focuses on the pony-tailed pop star’s 2019 concert tour, but there are glimpses into Grande’s offstage life that are a refreshing contrast to her glam persona.

Do: As 2020 ends, and with vaccination against the coronavirus ramping up, here’s what we know about how travel will change in the coming year.

We can help you celebrate the holidays with our At Home collection of ideas on what to read, cook, watch and do while staying safe at home.

The world has been watching with curiosity and alarm as scientists in Britain have described a newly identified variant of the coronavirus. It appears to be more contagious than more established variants. Here’s what scientists have learned about it so far.

Is the British variant some kind of new supervirus?

No. It’s just one variation among many that have arisen as the coronavirus has spread around the world. Mutations arise as a virus replicates, and this variant — known as B.1.1.7 — has acquired its own distinctive set of them.

Is it more contagious than other viruses?

It appears so. In preliminary work, researchers in Britain have found that the virus is spreading quickly in parts of southern England, displacing a crowded field of other variants that have been circulating for months.

However, a virus lineage becoming more common is not proof that it spreads faster than others. It could grow more widespread simply through luck. For instance, a variant might start out in the middle of a crowded city, where transmission is easy, allowing it to make more copies of itself. Still, the epidemiological evidence gathered so far from England does seem to suggest that this variant is very good at spreading.

Does it cause more severe disease?

There is no strong evidence that it does, at least not yet. But there is reason to take the possibility seriously. In South Africa, another lineage of the coronavirus has gained one particular mutation that is also found in B.1.1.7. This variant is spreading quickly through coastal areas of South Africa. And in preliminary studies, doctors there have found that people infected with this variant carry a heightened viral load. In many viral diseases, this is associated with more severe symptoms.

Will the variant render the new vaccines ineffective?

No. Most experts doubt that it will have any great impact on vaccines, although it’s not yet possible to rule out any effect.

P.S.
• We’re listening to “The Daily.” Our latest episode reflects on the lives of four people we’ve lost to Covid-19.
• Here’s our Mini Crossword, and a clue: Car with a charging station (five letters). You can find all our puzzles here.
• Poynter recently talked to our visual journalist Stuart Thompson about his interactive showing when you can expect to get vaccinated.