By Melina Delkic and Will Dudding

We’re covering China’s economic rebound, a troubling surge across Europe and a 2,000-year-old drawing discovered at the Nazca Lines site in Peru. 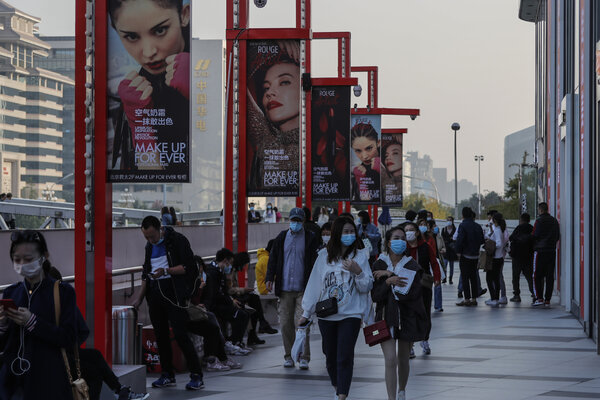 As most of the world still struggles with the pandemic, China is showing that a fast economic rebound is possible when the coronavirus is brought firmly under control. China’s lead could widen further in the months to come.

The world’s biggest economy grew 4.9 percent in the July-to-September quarter compared with the same period last year, the National Bureau of Statistics announced on Monday. The performance brings China almost back to the pace of growth it was reporting before the pandemic.

Context: Chinese companies are making up a greater share of the world’s exports, manufacturing consumer electronics, personal protection equipment and other goods in high demand during the pandemic. Local governments are injecting money into construction projects. And consumer spending is finally recovering.

Countries across Europe announced new restrictions on Monday in an effort to halt a strong second wave of the coronavirus. The global tally of cases passed 40 million.

Officials want to avoid a second economically damaging blanket lockdown. The new restrictions are imposed in a more precise fashion. Italy’s prime minister gave mayors the power to close streets or squares where people gather. A curfew remains in effect in nine cities across France, and Slovenia declared a 30-day state of emergency. Wales will enter a national lockdown starting Friday night that will last until Nov. 9.

They are the latest signs of growing worries in Europe after the continent initially compared favorably to the U.S. handling of the virus. Public health experts have long warned the virus could roar back when the weather grew colder.

Related: Museums in Europe have reopened — but visitors have not come back in high numbers. Institutions are reporting only about a third of the visitors they had last year. Even government bailouts may not be enough to compensate for the loss of ticket buyers.

Poland’s deputy prime minister and de facto leader, Jaroslaw Kaczynski, is going into quarantine after learning that he had been in contact with someone infected with the virus.

Officials in Melbourne, Australia, eased a lockdown, allowing residents to travel up to 25 kilometers from their homes and up to 10 people from two households to socialize outdoors.

Twenty-five crew members aboard a livestock carrier docked at a port in Western Australia have tested positive for the virus.

South Africa’s health minister, Dr. Zwelini Mkhize, said that he and his wife, Dr. May Mkhize, had tested positive for the virus and that he was optimistic that they would “fully recover.”

The Justice Department announced indictments of six Russian military intelligence officers in connection with major hacks worldwide, including of the Winter Olympics in Pyeongchang, elections in France and an attack in 2017 aimed at destabilizing Ukraine.

Prosecutors said the suspects were from the same Russian unit — known as Fancy Bear — that conducted one of the Kremlin’s major operations to interfere in the 2016 U.S. election, the theft of emails aimed at embarrassing Hillary Clinton.

Details: The 2018 hack of the Pyeongchang Olympics took out internet access and telecasts, grounding broadcasters’ drones and preventing spectators from attending the opening ceremony. Security experts coined the attack “Sour Grapes” because they believed it was conducted by Russians out of spite over a ban on Russian athletes. They also targeted British officials investigating the poisoning of a Russian former intelligence operative.

In Yamouneh, a village in the Bekaa Valley of Lebanon, cannabis grows everywhere and farmers have long counted on it for income. But for the first time since they began growing cannabis two decades ago, farmers are reconsidering their dependence on hashish.

The pandemic, the country’s economic crisis and the war in Syria, which has snarled smuggling routes, have erased profits. The production here and in other communities made Lebanon the world’s third largest hashish supplier, after Morocco and Afghanistan.

China-U.S. relations: China has threatened to detain U.S. citizens if the U.S. prosecutes arrested Chinese academics. In recent months, at least five scholars have been arrested who did not disclose their Chinese military affiliations on U.S. visa applications and might have been trying to conduct industrial espionage in research centers.

TikTok: Pakistani authorities reversed an Oct. 9 decision banning the social media app after TikTok promised it would moderate content according to local laws.

India-China border: Indian forces have captured a Chinese corporal who strayed across the disputed, unmarked border in the Himalayas, the Indian military said. But in a sign of a possible thaw, the Indians said they would quickly free him. It was the first time a soldier had been reported captured since hostilities exploded between India and China in June.

Diplomatic scuffle: A reception hosted by Taiwan in Suva, the capital of Fiji, gave way to a fistfight between officials representing China and Taiwan. According to Taiwan’s foreign ministry, a pair of Chinese diplomats showed up at the reception uninvited and sought to photograph guests.

Vietnam landslide: Search-and-rescue efforts were underway after a mudslide in the central province of Quang Tri killed at least 20 military personnel and left two missing. The deaths could be Vietnam’s largest military loss in peacetime.

Snapshot: Above, a cat figure etched into the side of a hill in Nazca, Peru. Archaeologists discovered the 2,000-year-old drawing at the Nazca Lines site. The image stretches for 40 yards and dates to about 200 B.C. to 100 B.C., experts say.

What we’re reading: This New Yorker interview with the Russian opposition leader Aleksei Navalny. “This takes you inside Navalny’s hospital room and the aftermath of his coma in specific details, including the fact that he was watching ‘Rick and Morty’ on the plane when he started feeling ill,” writes Claire Moses, who works on The Morning.

Cook: This lentil and orzo stew with roasted eggplant is rich, comforting and good for leftover lunches in coming days.

Listen: Bruce Springsteen’s “Letter to You,” his new album with the E Street Band, is built on lessons and skills accumulated in the past. But the Boss is focused on where he stands now — and where he’s going next.

Do: When you’re choosing a bed, think big. Here’s our shopping guide.

Take a break from work when you can. At Home has our full collection of ideas on what to read, cook, watch and do while staying safe at home.

Backyard birding could be the perfect pandemic pastime. If you don’t have access to a backyard, a porch or a rooftop will do. Here are the steps to get you started.

Set the table. Drawing a large and varied population requires multiple feeders, each offering treats meant to attract certain species. Tubular ones, fitted with perches too small for large birds and filled with mixed-seed finch food, will attract finches and other small birds. A feeder with perches spacious enough for large birds, filled with a wild bird food blend that is rich with nuts, fruit and sunflower seeds, will attract cardinals, blue jays, grackles and other big birds.

Have patience. It can take weeks for birds to discover their free buffet, but once your feeders are established, you’ll see birds you haven’t seen before. While you sit back and wait, read a field guide or download the Audubon Bird Guide app to learn about your new feathered guests.

Get a closer look. Observing birds with the naked eye is entertaining, but most birders use binoculars. You can get a good pair for less than $150, or you can spend $3,000 on the best models. Look for models that provide 8x magnification or more, so a bird will appear at least eight times as large when viewed through them as when viewed with the naked eye.

Or take a picture. If you’d like to photograph the birds, start with your smartphone. For more professional results, you’ll need a high resolution 35 millimeter digital camera and a telephoto lens. But even if you buy used equipment, expect to pay at least $500.

P.S.
• We’re listening to “The Daily.” Our latest episode is about whether Hispanic voters can flip a historically Republican state for the Democrats.
• Here’s our Mini Crossword, and a clue: Time that’s “the charm” (five letters). You can find all our puzzles here.
• Several Times stories were featured on New York University’s list of the 10 greatest works of journalism in the past decade.