We’re covering China’s tech crackdown and England’s plans to lift virus restrictions by the end of the month. 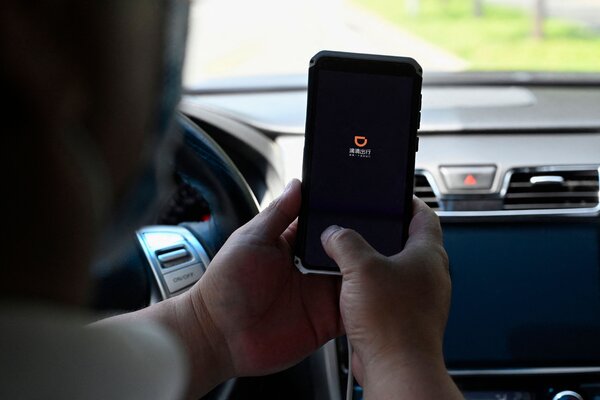 China’s government ordered the country’s leading ride-hailing platform, Didi, removed from app stores for “serious” problems related to the collection and use of customer data.

The country’s internet regulator, the Cyberspace Administration of China, did not explain what problems it had found. It was the latest blow for Didi, which went public on the New York Stock Exchange last week. The administration had issued another surprise announcement on Friday, saying that new user sign-ups would be suspended until the authorities conducted a review.

That announcement sent the company’s share price falling by 5 percent on Friday. The two moves in quick succession, coming so soon after the company raised billions of dollars in its Wall Street debut, suggest an intensifying effort by Beijing to rein in Didi.

Context: Regulators also moved against other companies that had recently been listed on Wall Street, sending a message that Beijing is still in charge. The Chinese government has been turning up the regulatory heat on internet companies, accusing them of competing unfairly against rivals and using consumers’ data to extract greater profits.

Officials in the Japanese resort town of Atami on Monday were still trying to locate more than 80 people after record-setting rains had brought a mudslide crashing through a residential area over the weekend. Startling footage showed mud crashing through the town as broken buildings floated away.

Four victims have been declared dead, and the authorities are trying to determine whether the dozens who remained missing were caught up in the disaster. They are considering releasing a list of names.

It came after more than a foot and a half of rain poured down on Atami, prompting the landslide, which destroyed more than 100 homes. Over a 72-hour period, the town was hit with 170 percent of the area’s average rainfall for July.

Weather: The authorities in the hot spring resort town, near Mount Fuji, had warned residents but had not ordered a broad evacuation. The area is on high alert, with more heavy rain in the forecast this week. Global warming has led to an uptick in rain and flooding in Japan. Dozens of cities and towns around Tokyo have hit new rainfall records in recent days.

Prime Minister Boris Johnson said on Monday that the government would very likely lift most remaining Covid rules in England on July 19 and leave it up to people to decide whether to keep wearing masks on transit and in confined spaces.

A final decision will be made on July 12. Although coronavirus variants have increased infections — Britain reported over 24,000 new daily cases on Sunday, the highest number since early February — hospitalizations and deaths have remained stable.

“There’s only one reason why we can contemplate going ahead to Step 4 in circumstances where we’d normally be locking down further and that’s because of the continuing effectiveness of the vaccine rollout,” Johnson said. Officials said they hoped to offer booster shots to people over 50 and other vulnerable groups this winter.

The numbers: At least 50 percent of the U.K. is fully vaccinated, according to a Times database. In England, 86 percent of adults have received at least one vaccine dose, among the highest rates in the world.

At least three cases of the deadly black fungus disease mucormycosis have been recorded in Afghanistan. It has infected tens of thousands in India, most likely because of unsanitary hospital conditions.

The mortuary at Fiji’s largest hospital is full in the midst of a Covid surge, Reuters reports.

Some regions in Spain are reinstating restrictions on nightlife as cases rise among young people, The Associated Press reported.

Philippine troops found the last five dead in a plane crash in the country’s south, and two wounded survivors died, raising the death toll to 52 in the military’s worst air disaster.

Thousands of people on the outskirts in Bangkok were evacuated Monday after a factory explosion killed one person and wounded 29.

The remaining part of a Miami condominium building was demolished, as officials said they still had hope to find survivors a week and a half after the fatal collapse.

As Lebanon’s economic crisis deepens, food and medicine are scarce and the country’s currency has lost 90 percent of its value. The World Bank said the financial crisis could rank among the world’s three worst since the mid-1800s.

The Vatican said Pope Francis was “in good general condition” after he had a three-hour operation on his colon. He is expected to stay in a hospital in Rome for a week.

They were the nice, older couple next door. Then the first body turned up. An Iranian couple has confessed to murdering and dismembering their son, years after killing a daughter and her husband. They have not shown remorse.

Some people have received booster shots in addition to the recommended vaccine doses, but it varies by country. Our science reporter Apoorva Mandavilli explained.

Since April, health care providers in France have routinely given a third dose of a two-dose vaccine to people with certain immune conditions. The number of organ transplant recipients who had antibodies increased to 68 percent four weeks after the third dose from 40 percent after the second dose, one team of French researchers recently reported.

But in the United States, there is no concerted effort by federal agencies or vaccine manufacturers to test this approach.

The Centers for Disease Control and Prevention, the Food and Drug Administration, and the National Institutes of Health even recommend against testing to find out who is protected. And academic scientists are stymied by the rules that limit access to the vaccines.

“There should be already a national study looking at post-transplant patients getting booster shots,” said one oncologist in New York, who led a study showing that some cancer patients did not respond to the vaccines. “It shouldn’t be our little team here in the Bronx trying to figure this out.”

The third-dose approach has widespread support among researchers because there is clear precedent. Immunocompromised people are given booster doses of vaccines for hepatitis B and influenza, for example.

An estimated 5 percent of the population is considered to be immunocompromised. The list of causes is long: cancers, organ transplants, kidney failure and dialysis, and drugs like Rituxan and steroids. “These are the people being left behind,” said a rheumatologist at N.Y.U.

This simple chicken curry is the “ultimate comfort food” for the cookbook author Meera Sodha.

“Milestone,” about a long-haul trucker in Delhi facing a major midlife crisis, is one of our movie recommendations from around the world.

P.S. The New York Times for Kids is expanding its team.

The latest episode of “The Daily” is about the conversation around critical race theory in the U.S.

You can reach Melina and the team at [email protected].