We’re covering a gradual reopening of Delhi despite vaccine shortages, and international reaction to Belarus forcing down a commercial flight. 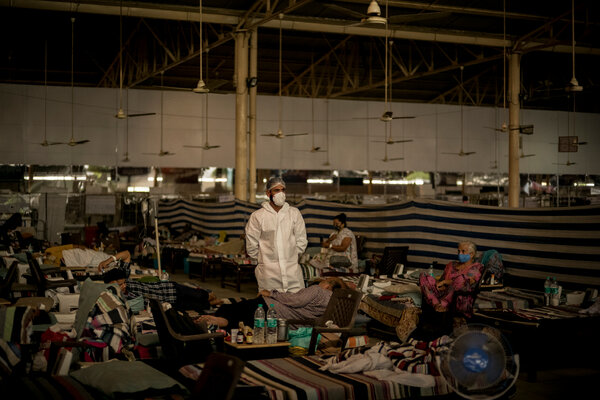 Six weeks after it was rocked by a devastating coronavirus surge, the region is considering relaxing its Covid-19 restrictions. Officials are pledging to ramp up vaccinations to protect New Delhi’s more than 20 million people.

Some residents are skeptical: This weekend, city officials had to close vaccination centers for lack of supply, a problem plaguing the entire country. India lacks manufacturing capacity to ramp up shots now, and lagged behind other countries in signing advance purchase agreements. Infighting between the central and local governments further complicates the prospect of importing supplies.

And many are remembering the crowded gatherings encouraged by officials that most likely led India to its state of crisis. “The only answer is vaccination,” said Dr. Anand Krishnan of All India Institute of Medical Sciences in New Delhi.

Details: Delhi’s chief minister, Arvind Kejriwal, announced on Sunday that the city would start “unlocking” gradually next week if cases continued to fall, while acknowledging a “severe shortage” of vaccines. Currently, all businesses, except essential services like food deliveries and pharmacies, are closed, and public transit is shut down.

The numbers: India became the third country to surpass 300,000 deaths, recording 303,720 as of Monday. Experts say the toll is most likely a vast undercount.

Hospitals in Osaka, Japan, are struggling to deal with a surge in new coronavirus cases. Osaka and Tokyo opened Japan’s first mass vaccination sites on Monday.

Taiwan’s push to take part in a World Health Organization meeting ended after the organization’s leadership voted against it. Taiwan had support from a handful of countries, including allies of the U.S., but China warned members not to get involved.

More than 50,000 New Zealanders have escaped the pandemic by moving home. But they are once again confronting the challenges that made them leave: high housing costs and employment challenges.

The European Union on Monday called on all E.U.- based airlines to stop flying over Belarus and began the process of banning Belarusian airlines from flying over the bloc’s airspace.

The moves were decided at a meeting of European leaders responding to the Belarusian authorities’ decision to divert a flight heading to Lithuania and detain Roman Protasevich, a dissident journalist on board.

The U.S. secretary of state, Antony Blinken, demanded the “immediate release” of Protasevich. Britain instructed its airlines not to fly over Belarus. The chief of Ryanair, the airline that was running the flight, called it a “state-sponsored hijacking.”

The scene on the plane: Protasevich “panicked because we were about to land in Minsk,” one passenger told the Lithuanian broadcaster LRT. “He said: ‘I know the death penalty awaits me in Belarus.’” Passengers said they were made to stand for three hours in a dark hallway in Minsk’s airport without access to water or bathrooms.

Israel’s new relationship with the U.S.

For decades, Israeli leaders and voters alike treated Washington as essential to their country’s survival.

But that dependence may be ending. While Israel still benefits greatly from American assistance, analysts say that the country may have achieved effective autonomy from the United States.

That changes U.S. leverage over Israel, our Interpreter columnist writes. American involvement in the Israeli-Palestinian peace process has already declined, its call for a cease-fire coming only after an Egyptian-brokered agreement was nearing completion.

Changes: Israel no longer needs American security guarantees to protect it from neighboring states, with which it has mostly made peace. Nor does it see itself as needing American mediation in the Palestinian conflict, which Israelis largely find bearable as it is. Once reliant on American arms, Israel now produces many weapons domestically.

Daw Aung San Suu Kyi, 75, made her first court appearance since the military coup that detained her and ended her term as Myanmar’s leader. She faces a raft of charges, and if found guilty, she could be imprisoned for life.

Fiame Naomi Mata’afa was set to be Samoa’s first female prime minister — but when she arrived at Parliament, her predecessor and his party had locked the doors, calling her election win a coup. Samoa now has two competing governments and two people claiming the leadership role.

Huawei’s founder urged employees to focus on software, according to Reuters, after U.S. sanctions crippled the telecommunications giant’s hardware business.

In memoriam: The scientist Yuan Longping died on Saturday at 90 years old. His development of high-yield rice hybrids helped alleviate famine and poverty across much of Asia and Africa, and made him a hero at home in China.

Among the 172 people trapped in a storm during a 62-mile mountain race in Gansu Province, China, was Zhang Xiaotao, who fell down nearly a dozen times in the icy, windy conditions and eventually passed out. He woke up in a cave, wrapped in a quilt next to a fire built by a shepherd who had carried him to safety. Our reporters traced what happened in the perilous and quickly shifting weather conditions.

Welcome to the Space Jam

The movie “Space Jam” — a comedy centered on a basketball game that pits Michael Jordan and the Looney Tunes characters against aliens — came out in 1996, during the internet’s early days. Its official website reflects its age: a simple pixelated image of stars, dotted with cartoon planets. By remaining unchanged, it has become a beloved cultural artifact for a subset of millennials.

The site “is important in the way antique maps are important,” Gina Cherelus and Caity Weaver write in The Times. It documents the internet as it once was, with downloadable screen savers, printable coloring pages and a one-second audio clip of Jordan saying, “You guys are nuts.”

Spacejam.com was recently repurposed to advertise the coming sequel, “Space Jam: A New Legacy,” starring LeBron James. But you can still find a prominent link to the original site. When it was made, “the internet was still whispering its promise,” said Don Buckley, an advertising executive for the film. “We were exuberant about its possibilities.”

The flavors of Korean barbecue are built into these cheeseburgers with sesame-cucumber pickles.

Here’s how to make a pinwheel that’s a fun decoration for cupcakes and other desserts.

P.S. Cynara Charles-Pierre is joining The Times from TD Bank as S.V.P. of Culture and Communications.

The latest episode of “The Daily” is about the crumbling of the N.R.A., America’s most powerful gun rights group.

Sanam Yar wrote the Arts & Ideas. You can reach Melina and the team at [email protected].