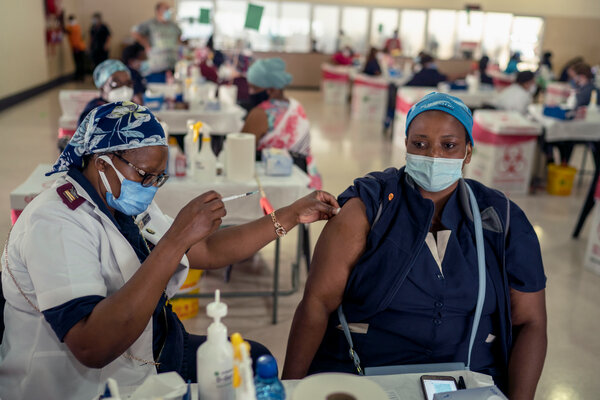 Safety scares over the AstraZeneca and Johnson & Johnson vaccines have jeopardized campaigns to inoculate the world, undercutting faith in two shots with the potential to be global workhorses and threatening to prolong the coronavirus pandemic in poor countries.

In Malawi, people are asking doctors how to flush the AstraZeneca vaccine from their bodies. In South Africa, Johnson & Johnson doses have been paused, a repeat blow after the country dropped the AstraZeneca shot. Two million AstraZeneca doses languish in the Democratic Republic of Congo, where no one has been vaccinated.

In countries where colonialism and unethical medical practices left a legacy of mistrust, health officials worry about an explosion of antivaccine fervor if a perception takes hold that rich countries — where officials fear the two shots could be linked, in very rare cases, to blood-clotting problems — are dumping second-rate vaccines on poorer ones.

Alternatives: The E.U. announced yesterday that it was putting trust and money into the Pfizer-BioNTech shot to salvage its vaccination rollout. But much of the world has no such backup plan. The AstraZeneca and Johnson & Johnson vaccines are cheaper and easier to store than others, which has made them mainstays of the plans for global inoculations.

Denmark yesterday became the first country to say it would permanently stop administering the AstraZeneca vaccine.

With 100 days until the Tokyo Olympics, Japan is grappling with a new wave of infections.

The Moderna vaccine has been more than 90 percent effective in the U.S. at protecting against Covid-19 six months after vaccination, the company announced Tuesday.

Keeping an airplane’s middle seats vacant could reduce passengers’ exposure to airborne coronavirus by 23 to 57 percent, researchers reported in a new study.

In light of the news that the U.S. will pull all its forces from Afghanistan by Sept. 11, NATO’s foreign and defense ministers agreed yesterday to begin withdrawing their 9,600 troops on May 1 and finish “within a few months,” according to a statement.

In Washington, President Biden formally announced the U.S. withdrawal, but he warned the Taliban that if Americans are attacked on the way out, “we’re going to defend ourselves and our partners with all the tools at our disposal.” Here’s what you need to know.

The withdrawal will end the longest war in U.S. history, but it is likely to start another difficult chapter for Afghanistan’s people. It is unclear what the future holds and if the fighting will ever stop. Some fear that everything will be lost when the Americans leave.

Personal account: “I am so worried about my future. It seems so murky. If the Taliban take over, I lose my identity,” said Wahida Sadeqi, 17, a high school student in Kabul. “I was born in 2004 and I have no idea what the Taliban did to women, but I know women were banned from everything.”

Context: U.S. intelligence officials paint a grim portrait of what lies ahead for Afghanistan, but they do not expect it to become a terror threat to America right away. Mr. Biden’s decision to withdraw makes clear his belief that contending with a rising China takes precedence.

Just over two months into his tenure, Mario Draghi, the Italian prime minister, has shaken up a Brussels leadership that had seemed to be asleep at the wheel.

His seizure of a shipment of AstraZeneca vaccines destined for Australia was a turning point for both Europe and Italy — and a clear sign that a new, aggressive and potent force had arrived in the European bloc. The E.U. has since authorized even broader and harsher measures to curb exports of Covid-19 vaccines badly needed in Europe.

In his short time in office, Mr. Draghi, renowned as the former European Central Bank president who helped save the euro, has quickly leveraged his European relationships, his skill in navigating E.U. institutions and his nearly messianic reputation to make Italy a player on the continent in a way it has not been in decades.

Bernard Madoff, the one-time senior statesman of Wall Street who ran the largest and possibly most devastating Ponzi scheme in financial history, died in prison yesterday at 82.

Denmark has become the first European Union country to deprive Syrian refugees of their asylum status, with the authorities telling some of them to go back.

Investors are hungry for crypto’s coming-out party: Shares in Coinbase, the first major cryptocurrency company to list its shares on a U.S. stock exchange, began trading at $381 per share yesterday, a 52 percent increase over Nasdaq’s $250 reference price.

The Capitol Police were told not to use their most aggressive tactics ahead of the Jan. 6 riot despite warnings of violence, according to a scathing new report by the agency’s internal investigator.

The white Minnesota police officer who fatally shot Daunte Wright, a 20-year-old Black man, after appearing to mistake her handgun for her Taser was charged with second-degree manslaughter yesterday, following three nights of protests over the killing.

Over 50 years after Brian Robson mailed himself out of Australia in a crate, emerging almost 8,000 miles away, he is looking for two friends who helped him.

A new study found that female Indian jumping ants shrink their brains by nearly 20 percent to prepare their bodies for reproduction, in a bid to become queen. If they are unsuccessful, they can unshrink them in a matter of weeks.

Muldrow Glacier, in the shadow of Denali in Alaska, is currently moving at up to 90 feet a day, about 100 times faster than normal. This rare surge has provoked the delight of glaciologists, who have seized on the chance to study it.

The superstar Elton John and the rising singer Rina Sawayama. The playwright Jeremy O. Harris and his drama school classmates. The artist Ai Weiwei and his cats.

T Magazine’s annual Culture issue is dedicated to friendship in all its forms, “how sustaining it is and how elastic it can be,” as Hanya Yanagihara, the editor in chief, writes. “There are no rules about what a friendship can be: It needs only effort, and mutual commitment.”

The issue has art, photography and essays on life-defining relationships, the kinds that drift apart and the ones that always pick up right where they left off. See it here.

This dish of chewy soba noodles, chicken and crisp sugar snap peas is delicious cold or at room temperature.

When planning your garden, forget whatever you’ve heard anecdotally about which plants “love” which other plants, and look to the science instead.

A Read From Elsewhere

Ordering “un tacos” — never “un taco” — in France will get you an idiosyncratic fast foodstuff that has little to do with its Mexican origins, as this deep dive from The New Yorker explains.

P.S. We are relaunching the Chinese Daily Briefing on Thursday to bring all the news of interest to our Chinese-speaking readers. Sign up here.

The latest episode of “The Daily” is about the Supreme Court.

You can reach Natasha and the team at [email protected].