We’re covering a new elections battle in the U.S. after the death of Justice Ruth Bader Ginsburg, online harassment from virus tracking in South Korea and growing protests in Thailand. 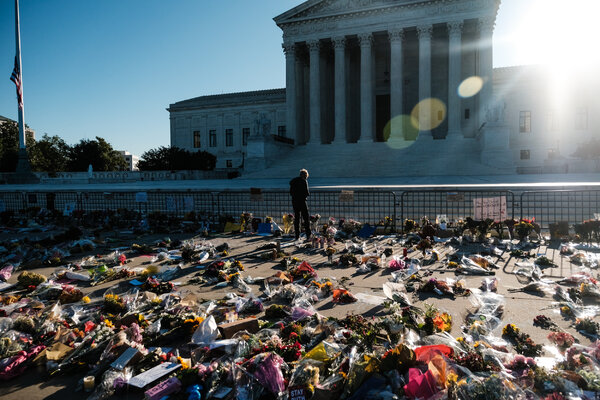 The U.S. is mourning the death of Ruth Bader Ginsburg, the deeply admired Supreme Court justice who died on Friday. Her death has set the stage for a polarizing battle to replace her on the court.

With just six weeks to go before the Nov. 3 election, President Trump has vowed to fill her vacant seat “without delay” and said that he would choose a woman.

Justice Ginsburg had said that her “most fervent wish” was that she not be replaced before a new president took office, and Democrats are angrily recalling Republicans’ refusal in 2016 to consider President Barack Obama’s nominee for a successor to Justice Antonin Scalia, who died nine months before that year’s election.

The stakes: Justice Ginsburg’s death has the potential, at least in part, to shift the race from a referendum on Mr. Trump and his handling of the coronavirus crisis to a battle over the court and volatile issues like abortion.

Voting from abroad: U.S. citizens who asked for an electronic ballot should have received one over the weekend. If not, they should contact their local election office. Voting officials recommend completing the ballot as early as possible, especially if the relevant state requires it to be returned by mail. It’s not too late to request a ballot — here’s a guide.

South Korea owes much of its success against the coronavirus to tracing those infected with surveillance cameras, smartphone data and credit card records.

That aggressive approach has also fed a growing culture of online harassment and raised questions about privacy.

Case in point: The authorities revealed information about Kim Ji-seon, a 29-year-old office worker after she tested positive, including her age, her church affiliation and recent whereabouts. Online trolls then accused Ms. Kim of belonging to a cult, and matched her movements with that of another church member who had tested positive to conclude she was cheating on her fiancé.