Good morning. We’re covering the latest on the U.S. effort to evacuate Afghans in Kabul, the extended lockdown in Australia and America’s fast-growing Asian population. 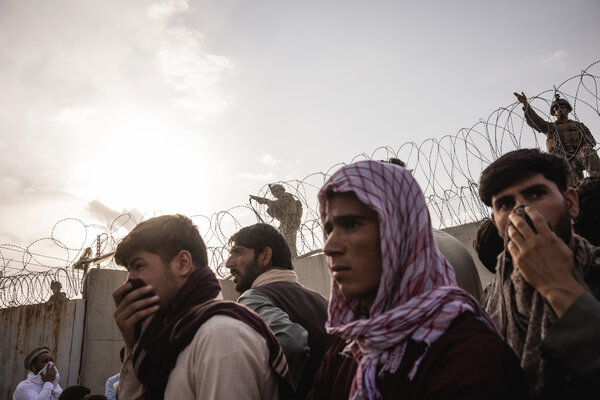 Eighteen planes will ferry passengers, who are sheltering in bases in the Middle East following their evacuation from Kabul, to Europe and then onto the U.S. Follow our live updates.

Speaking at the White House on Sunday, President Biden insisted that the operation was making progress, saying nearly 28,000 people had been evacuated since Aug. 14 on U.S. and coalition aircraft, including civilian charters.

“The evacuation of thousands of people from Kabul is going to be hard and painful, no matter when it started, when we began,” Biden said. “There is no way to evacuate this many people without pain and loss and the heartbreaking images you see on television.”

At the Kabul airport, surging crowds have trampled people to death, including a toddler. U.S. officials also warned of the possibility of an attack by the Taliban’s Islamic State rivals.

Some interpreters and journalists, after terrifying attempts to fight past Taliban gunmen and unruly mobs to catch planes, have given up trying to escape. “I’ve lost hope,” one man said. “I’ve lost trust in the U.S. government, which keeps saying, ‘We will evacuate our allies.’”

Failure: Biden had promised an orderly withdrawal. Interviews with key participants in the last days of the war show a series of misjudgments and miscalculations that led to the chaos.

What’s next: Leaders of the Group of 7 nations will hold a virtual meeting on Tuesday to discuss the situation in Afghanistan. One topic that will most likely be discussed is the final destination for thousands of Afghans who need new homes.

A longer lockdown in Australia

As the Delta variant continues to spread through the country, officials extended the lockdown in Sydney to Sept. 30. It had been scheduled to be lifted later this month.