Trump and Biden square off in the final debate.

We’re covering the final U.S. presidential debate of 2020, the effects of Europe’s second coronavirus wave and the improbable rise of the #MeToo movement in Iran. 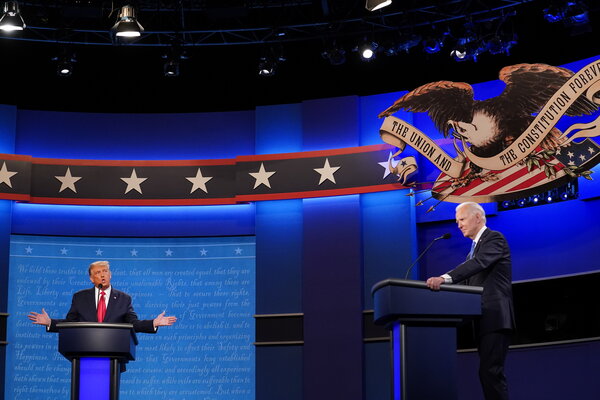 In their final debate before the U.S. election, President Trump and former Vice President Joe Biden offered starkly different forecasts for the coronavirus pandemic, with Mr. Trump insisting in defiance of evidence that the disease was “going away” with Mr. Biden warning of a “dark winter” that could threaten the lives of hundreds of thousands more Americans.

In a notably calmer exchange, characterized by repeated untruths from the president, the candidates sparred at Belmont University in Nashville over reports of foreign interference, the appropriate response to the pandemic and their respective health care and immigration policies.

With 11 days remaining before the election, the debate represented perhaps the last opportunity for Mr. Trump to shake up the presidential campaign and claw his way into closer contention against Mr. Biden, who continues to outstrip him in the polls.

Hot-button issue: In a year when live broadcasts have shifted online in response to coronavirus concerns, the mute button became even more important.

Supreme Court: Republicans advanced Judge Amy Coney Barrett’s nomination to the Supreme Court to the full Senate. Under pressure to take a stand on expanding the court, Mr. Biden said he would create a commission to study broad changes to the court system.

As new coronavirus cases began to increase again across Europe last month, hospitals were initially spared the mass influx of patients they had weathered this spring. Some suggested that the virus had become less deadly, or that older, more vulnerable people would be shielded.

But a second wave of serious illness makes it clear: The pandemic is still dangerous and adherence to control measures over the next few weeks will be crucial in preventing hospitals from becoming overrun for a second time this year.

Already, Poland has turned its largest stadium into an emergency field hospital. The numbers of Covid-19 patients in Belgium and Britain have doubled in two weeks. And doctors and nurses in the Czech Republic are falling ill at an alarming rate.

What to watch: Some experts worry that countries that let their guard down did not increase hospital capacity during a reprieve from the virus and are not prepared. Deaths in most of Europe have ticked up slowly, and experts say increases in deaths are likely over the next couple of weeks.

Russia’s health minister, Mikhail Murashko, will self-quarantine after a member of his family tested positive, an aide said.

Four students at a university in Britain were fined a total of 40,000 pounds for holding a house party with more than 30 people.

Europe and the ‘America problem’

President Trump has treated many European leaders with contempt, and many look forward to the possibility of Joe Biden’s winning the presidency. But four years of America-first policies have changed the dynamic in ways that will not be reversed easily, our chief diplomatic correspondent writes.

In light of the U.S.’s growing polarization, some European leaders are instead looking toward European “strategic autonomy” — a continent less dependent on Washington and one with its own strong voice in the world — though for now it remains more aspiration than reality.

Analysis: A fundamental trust has been broken, and many Europeans believe that U.S. foreign policy is no longer reliable. “Biden doesn’t solve their America problem,” said Jeremy Shapiro of the European Council on Foreign Relations. “People have learned that the U.S. can’t be trusted on foreign policy because the next administration will come in and wipe it away.”

A #MeToo awakening stirs in Iran

Three years into the global #MeToo movement, women who say they were sexually assaulted by men are going public in the Islamic Republic of Iran. The internationally acclaimed artist Aydin Aghdashloo, who has ties to the ruling elite, is among those accused.

“This is a turning point,” said the co-founder of an education and advocacy group in Tehran. “The biggest taboo for women in Iran has been sex and sexual violence and abuse.”

U.S. election: Russia recently hacked into U.S. computer networks and has plans to interfere in the presidential race in its final days or immediately after the Nov. 3 election, American intelligence agencies say.

1MDB: Goldman Sachs’s Malaysia subsidiary pleaded guilty to a conspiracy charge after employees paid bribes to officials in connection with the looting of the sovereign wealth fund. The bank will pay billions in penalties in Malaysia, the U.S. and Hong Kong.

Copenhagen mayor: Frank Jensen resigned and admitted to harassing numerous women over decades. The complaints and his sudden fall have shaken Denmark, a liberal nation that routinely tops international measures of women’s rights and gender equality.

Ghislaine Maxwell: The four-year-old deposition of Jeffrey Epstein’s former romantic partner was released, giving a voice to a quiet but central figure in the scandal. Ms. Maxwell is charged with conspiring with Mr. Epstein in his abuse of minors.

Snapshot: A protest against abortion restriction in Krakow, Poland, above, on Wednesday. A court ruled that abortions for fetal abnormalities violate the country’s Constitution, effectively imposing a near-total ban in a nation that already had some of Europe’s strictest abortion laws.

What we’re listening to: The podcast series “The Service" from the broadcaster RNZ, on the role of New Zealand’s international spy agency in the Cold War. No matter where you are in the world, it’s a great listen.

Cook: This cauliflower, cashew, pea and coconut curry is rooted in tradition and complexly flavored. It’s also approachable enough for a weeknight.

Watch: “Radium Girls” tells the true story of factory workers in New Jersey in the 1920s who suffered from misleading information about radium. Our reviewer writes that the film has “a loudly beating feminist heart and a narrative grounded in reality.”

Do: The Times Magazine wrote a tip sheet on how to scatter cremated remains. Say a prayer, a poem, a remembrance. Scatter with intention.

Being stuck at home shouldn’t feel like a lockdown. There’s entertainment all around you if you look for it: Our At Home section is here to help.

The best sources on college quarantines

A network of freelance correspondents provided a rare glimpse into how universities were handling the pandemic, the editor Scott Dowd writes for this Times Insider piece. This is a lightly edited excerpt.

As one of the editors guiding The Times’s back-to-school coverage, I started noticing more and more all-student quarantines throughout September, and wondered what it was like on a campus where everyone was supposed to stay inside and avoid socializing — the very opposite of a typical college experience.

For the quarantine story, I reached out to reporters and editors at campus newspapers nationwide, asking if they could relay what was happening inside their schools. Their dispatches provided readers with a rare look at what life is like at American universities that have imposed campuswide quarantines or stay-in-place orders for 14 days. (And for those who might wonder: Yes, they signed professional stringer contracts and will be paid.)

Among the scenes they captured: roommates at war over coronavirus restrictions. Entire dormitories on lockdown. Panicked, pajama-clad students running through the streets to stock up on beer and groceries, or begging Mom and Dad to bring the minivan for a quick escape.

Needless to say, the experiences these journalists described were not what most college students dreamed of when perusing admissions brochures, including routine quarantine violations and a “snitch form” that allowed students to rat one another out for not following the rules.

In some parts of the country, as local journalism has withered, college publications have had to step in to fill the void. And many campus journalists have done a terrific job holding their administrators and peers accountable during the pandemic. The Times is continuing to look for ways to tap into their expertise and collaborate with them.

That’s it for this briefing. Have a peaceful weekend.

P.S.
• We’re listening to “The Daily.” Our latest episode is about the Electoral College.
• Here’s our Mini Crossword, and a clue: “Common dip for hot wings” (five letters). You can find all our puzzles here.
• Feeling an autumnal chill? Take inspiration from history and rustle up a hot toddy.
• Raha Naddaf, executive editor of The California Sunday Magazine, is joining The New York Times Magazine as a story editor.