We’re covering the U.S. preparing for Covid booster shots and the resignation of a U.S. diplomat over the deportation of Haitian migrants. 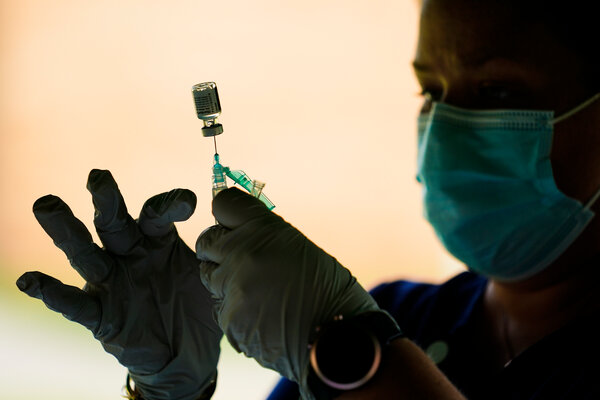 A day after drug regulators authorized the third shot of the Pfizer vaccine for some Americans, a panel from the Centers for Disease Control and Prevention specified who should qualify.

C.D.C. science advisers unanimously supported the booster shot for adults older than 65 and for residents of long-term care facilities. They also endorsed shots for people ages 18 to 64 with underlying conditions. People could begin receiving the shots as soon as the end of the week.

U.S. drug regulators had authorized the booster shots on Wednesday for older and high-risk adults and people with high exposure jobs.

Our science and global health reporter Apoorva Mandavilli broke down the debate about boosters.

Why are booster shots necessary for these vulnerable populations?

There’s very little disagreement about whether older adults — for example, over 80 — should get the booster shot. The evidence is pretty clear: They’re at high-risk, and their immunity isn’t great to begin with and falls off quickly.

But the question a lot of experts are asking is, “What is the goal here?” We don’t want to risk infection in older adults, but for everybody else, avoiding all infections may not be the right goal, because these vaccines are never going to deliver on that.

What they’re saying is that instead, the goal for these vaccines should be to prevent severe disease and hospitalization. And there, the data is not yet showing a drop-off in younger people.

What about the counterarguments from W.H.O. officials and nations with far lower vaccination rates that the U.S. should be spreading the wealth?

In practice, Covax has had a lot of problems getting the vaccine companies and countries to follow through with their promises. They will be about 25 percent short of their goal by the end of this year. Clearly, it’s not as simple as making doses for rich countries and making doses for poor countries at the same time.

The reality is that billions of people are still unvaccinated, and there is a limit as to how many vaccines can be made. Many public health experts I’ve talked to have said that if we continue to give boosters to rich people while the majority of the world’s population hasn’t had a dose, we’re actually risking the emergence of new variants that could be more dangerous than Delta.

The race to replace Merkel is tightening

As Germans were preparing to vote on Sunday for her successor, Chancellor Angela Merkel was traveling the country and unexpectedly involved in campaigning — a sign that her conservatives were still in a perilous position.

For weeks, polls have shown the Social Democratic Party to be in the lead, ahead of Merkel’s conservative Christian Democratic Union. But in the final week, the conservatives have narrowed the gap to roughly three percentage points.

For Germany and for Merkel’s legacy, there is much at stake. Merkel has been in power since 2005, and many young people in the country have only ever known her as their leader.

Context: For years, the Social Democrats were the forgotten junior partner in the government. Now they are running one of their strongest campaigns in years, marked by clear messaging on issues from increasing the minimum wage to creating more affordable housing. Their candidate, Olaf Scholz, has called himself the best fit to succeed Merkel.

Daniel Foote, the senior American diplomat who oversees Haiti policy, submitted a letter to the State Department that severely criticized the Biden administration’s “inhumane, counterproductive decision” to send Haitian migrants back to a country that has been devastated by a major earthquake and political turmoil.

About 1,400 Haitian migrants who had traveled to the Texas border from Mexico and Central America have been deported since Sunday, even as Haitian officials pleaded with the U.S. to grant a “humanitarian moratorium.”

Foote was appointed special envoy to Haiti in July, just weeks after President Jovenel Moïse was killed in his bedroom during a nighttime raid on his residence. In his letter, Foote blasted a “cycle of international political interventions in Haiti” that “has consistently produced catastrophic results.”

Details: Foote was said to have pushed for greater oversight and responsibilities in his job as envoy to Haiti, efforts that were rejected by senior State Department officials.

News From Asia and Australia

Uyghurs in Afghanistan were for years protected by the U.S. presence. Now, as the Taliban cozies up to China, they fear they will be sent there as part of a deal for economic aid.

An Australian court ruled that a former principal of an ultra-Orthodox Jewish girls’ school must stand trial on charges that she had sexually assaulted students under her care.

Thousands of fighters and family members of Boko Haram, known for kidnapping schoolgirls and sending suicide bombers, defected and then moved into a city they once terrorized.

Murders rose nearly 30 percent in the U.S. last year, the sharpest increase on record — and have continued rising this year.

The E.U. unveiled plans to use a single, standardized phone charger across the bloc, an initiative that is likely to hit Apple hard.

The fate of a 6-year-old boy who was the sole survivor of a cable-car accident in Italy is being decided by an Israeli court, in an international custody battle that has drawn world attention.

There are now two Australias: one with Covid and one that has managed to keep it out. In Perth, offices, pubs and stadiums are crammed and as normal as ever. In Sydney, residents are approaching their 14th week of lockdown. The confidence of 2020, when lockdowns brought outbreaks to heel, has been replaced by doubt, fatigue and a battle over how much freedom or risk should be allowed in a Delta-defined future.

Art that looks at what women see

The exhibition “Close-Up,” which opened on Sunday at the Beyeler in Basel, Switzerland, asks visitors to consider how female artists view their portrait subjects, reports Nina Siegal for The Times.

Curated by Theodora Vischer, the show of about 100 artworks presents portraiture from 1870 to the present day by nine women, including Mary Cassatt, Frida Kahlo, Cindy Sherman and Marlene Dumas. It asks: Is there such a thing as the “female gaze”? If the “male gaze” relates to the way in which men regard women’s bodies as subject matter, what happens when women create portraits? Do they look at their subjects differently?

“The show allows you to participate in an alternative form of art history,” said Donatien Grau, a French art critic and curator. It is, he said, art history as seen through the eyes of women artists.

Read more about the exhibition here.

Michael Gandolfini, son of James, steps into the role his father made famous: Tony Soprano.

The film “In Balanchine’s Classroom,” about the choreographer George Balanchine, is “both enthralling and heartbreaking,” our reviewer writes.

P.S. The latest episode in our virtual event series on climate change, Netting Zero, will look at international freight and solutions to reduce the industry’s emissions. You can sign up here.

The latest episode of “The Daily” is on gerrymandering in New York State.

Natasha Frost wrote the Arts and Ideas section. You can reach Melina and the team at [email protected].