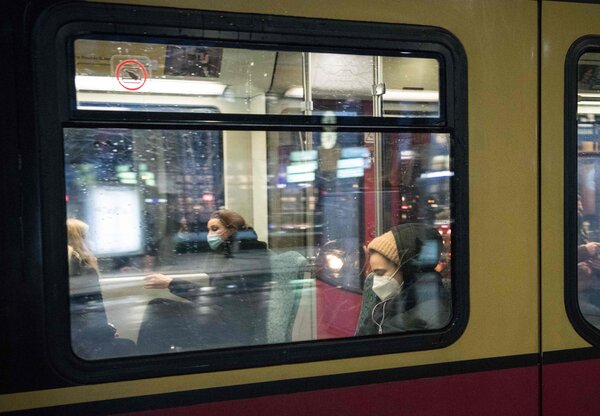 As European countries brace for a potential surge of coronavirus cases linked to the new variants, countries have reimposed strict lockdown measures, and some have made “medical” grade masks mandatory in some areas.

Starting this week in Germany, N95 or surgical-grade masks are compulsory for people on public transportation, in office spaces and in shops. The higher-grade mask will also become mandatory in Austria, and France could follow, despite criticism that the more expensive N95 will be out of reach for many low-income earners.

“We have to slow the spread of this variant. That means we cannot wait until the danger is palpable,” Chancellor Angela Merkel said. Effectively, the German authorities are trying to buy time by slowing the spread of the new variant long enough for the weather to warm and for the number of people vaccinated to increase, Ms. Merkel said.

Global context: The more contagious variant discovered in Britain has been found in 60 countries, but it remains unclear how it spreads, and whether it has already contributed to countries’ surges.

Britain’s biggest music festival, Glastonbury, was canceled on Thursday for a second year in a row. The announcement came as coronavirus deaths were soaring in England.

Three locally transmitted coronavirus cases were confirmed on Thursday in Shanghai as fears rose over another large-scale outbreak in China.

President Biden is to unveil on Thursday a national strategy to combat the pandemic that includes ramping up the manufacturing of test kits, vaccines and supplies.

President Biden recommitted the U.S. to the Paris climate agreement and reinstated environmental regulations that were scrapped by former President Donald Trump, among his first executive actions after his inauguration on Wednesday.

The return to the international climate agreement, which has 200 signatories, puts the U.S. back on track to keep up with countries like China and France in their commitments to slash planet-warming emissions. It’s a significant move as the U.S. is the world’s second-worst emitter of carbon after China.

“No president has brought in this many people at the start of an administration to work on climate change,” Lisa Friedman, who covers climate policy, told our colleagues at The Morning. Still, there are many more big steps necessary to confront global warming, and Republicans plan to push back on many of Mr. Biden’s new climate policies.

Diplomacy: Experts say Mr. Biden will be more visible and active on the world stage than many expect, even as he grapples with the pandemic, a huge economic recovery effort and the deep divisions left by the Trump era.

The Russian government is threatening Radio Free Europe/Radio Liberty with multimillion-dollar fines and possible criminal charges. Its editors fear that they will be forced to shut down in the country for the first time since the collapse of the Soviet Union.

With public discontent growing in Russia, widely available content that criticizes the Kremlin has become a problem for President Vladimir Putin. The outlet has invested in coverage of the Belarus protests, for example.

Context: The government’s escalation in its pressure campaign against the news outlet shows how Mr. Putin is raising the stakes in his conflict with Washington just as President Biden takes office.

Details: RFE/RL says the government has in recent weeks notified it of dozens of violations of new requirements that it label all of its content as being produced by a “foreign agent.” Editors say doing so would damage credibility.

If you have 8 minutes, this is worth it

In search of lost time in rye bread

When Gottlieb’s Bakery, above, reopened in Savannah, Ga., after shutting its doors in 1994, Herbert Buchsbaum, a Times editor, rediscovered a taste of his childhood: a sandwich on the bakery’s tangy, chewy rye.

“A morsel of madeleine in a spoonful of tea evokes a childhood in a French village,” he writes. “A bite of rye with Dijon mustard calls up mine in Savannah.” But that link to the past shattered with a pandemic, and a death.

Australia detention: Dozens of refugees and asylum seekers have been held in hotels in Melbourne for the past year, often with only an hour spent outside their rooms daily. Two detainees have tried to commit suicide, according to activists, and many were shellshocked when they were finally released this week.

Philippines earthquake: A strong 7.1-magnitude earthquake shook the Philippines on Thursday night, striking southeast of Davao. Officials said the quake was deep enough that they did not expect a tsunami.

Snapshot: Above, President Biden and the first lady, Jill Biden, watching the fireworks from the White House. Katy Perry performed her song “Firework” at the end of the Inauguration Day celebrations, in a star-studded virtual event hosted by Tom Hanks.

What we’re reading: This Washington Post look at Donald Trump’s last day as president. It provides closure of some sort.

Cook: Two pantry staples, chickpeas and pasta, come together to give you this hearty fried tagliatelle dish with smoky tomatoes.

Watch: “The White Tiger,” Ramin Bahrani’s rags-to-riches tale of modern India uses the story of a young businessman’s rise to indict the iniquities of the society that created him.

Do: If you have knee arthritis, we offer tips on the best shoes to reduce pain.

Take a break during your hectic day and turn to our At Home collection of ideas on what to read, cook, watch, and do while staying safe at home.

President Biden is inheriting tricky tech questions, including how to rein in powerful digital superstars, what to do about Chinese technology and how to bring more Americans online. Our OnTech newsletter has this glimpse at the challenges and opportunities in technology policy.

Restraining tech powers: Under the Trump administration, there were investigations and lawsuits over the power of Google, Facebook, Amazon, Apple and other tech companies. Tech giants can expect more of the same under Mr. Biden and a Congress controlled by Democrats. The new administration is expected to continue lawsuits against Google and Facebook.

Tech and China: The Trump administration’s fumbling over Chinese apps like TikTok was a missed opportunity to address an important question: What should the U.S. government do about globally important technology from countries that don’t share America’s values? Mr. Biden has expressed support for more government investment in U.S. technology to counter China’s ambitions but hasn’t said much beyond aiming for a more coherent policy.

What else? Mr. Biden’s economic revival plan includes suggestions to “launch the most ambitious effort ever” to modernize U.S. cyberdefenses. Maybe this is the year for a federal data privacy law? And there are rifts among Democrats on special employment treatment for “gig” workers.

P.S.
• We’re listening to “The Daily.” Our latest episode is about the Biden inauguration.
• Here’s our Mini Crossword, and a clue: Queen Elizabeth’s favorite dog breed (five letters). You can find all our puzzles here.
• Our interactive graphic lets you have a closer look at who attended President Biden’s inauguration.