Bessemer — the Alabama city where Amazon warehouse workers recently voted not to join a union — is named for Henry Bessemer, a British inventor who revolutionized steelmaking. When an Alabama businessman founded the city in 1887, he called it Bessemer in the hope that it would become a steel-industry center.

It did. Using iron ore and the other natural resources in Alabama, Bessemer’s steel mills thrived. They provided jobs that helped many workers build middle-class lives. They were typical of the broad-based American prosperity of the mid-20th century.

Today, those steel jobs are long gone, done in by technology and global competition. Bessemer no longer makes any steel. On the site of a former mill — one owned by U.S. Steel — is the giant Amazon warehouse that has been in the news because of the union vote.

Amazon soundly defeated the union’s organizing effort by emphasizing that it already paid well above the federal minimum wage of $7.25. And that’s true: All of its employees make at least $15 an hour. The message resonated. Relative to other jobs they might find, Amazon workers decided they were already doing pretty well.

But it’s also worth thinking about Amazon jobs in a broader context, one that includes not just the available alternatives today but also the history of Bessemer and many other struggling cities and towns around the U.S. Compared with many of the jobs that were once available — factory jobs and others that allowed workers to rise up the economic ladder — Amazon jobs don’t look so appealing. Fifteen dollars an hour for a full-time worker translates to about $31,000 a year, less than half of U.S. median family income and low enough in many cases for a family to qualify for subsidized school lunches.

That is not the kind of pay that seems likely to help the country again build a growing, thriving middle class. And Amazon jobs are looking more and more like the future of the U.S. economy.

‘Akin to a factory’

Amazon is the country’s fastest-growing company by many measures. Its founder and chairman, Jeff Bezos, is the world’s richest man. It employs about 1.3 million people worldwide, up from 750,000 only a year and a half ago. Among American companies, only Walmart has a larger work force.

Alec MacGillis, the author of an excellent new book about Amazon, called “Fulfillment,” points out that Amazon’s warehouse jobs have a lot in common with the industrial jobs of the past. They are among the main options for people who graduate from high school or community college without specific job skills. They are also physically demanding and dangerous.

MacGillis is careful to remind people about the injuries and deaths that came with old factory jobs, and he documents the similar risks that warehouse jobs can bring. Jody Rhoads was a 52-year-old mother and breast cancer survivor in Carlisle, Pa. Her neck was crushed by a steel rack while she was driving a forklift in an Amazon warehouse, killing her. (“We do not believe that the incident was work related,” an Amazon manager reported to the federal government, falsely suggesting her death was from natural causes.)

As Spencer Cox, a former Amazon worker who’s now writing a Ph.D. thesis at the University of Minnesota about the company, told my colleague David Streitfeld, “Amazon is reorganizing the very nature of retail work — something that traditionally is physically undemanding and has a large amount of downtime — into something more akin to a factory, which never lets up.”

But for all of the similarities to factory work, Amazon jobs also have crucial differences. They are more isolating, as MacGillis explained to me. Rather than working in teams of people who are creating something, warehouse workers often work alone, interacting mostly with robots. Amazon jobs also pay less than many factory jobs did.

MacGillis tells the story of three generations of Bodani men who worked in the Sparrows Point steel mill, near Baltimore. The youngest, William Bodani Jr., was making $35 an hour in 2002 (about $52 in today’s dollars), along with bonuses. That’s enough for a solid middle-class income.

With the steel mill gone from Sparrows Point, Bodani instead took a job at the Amazon warehouse that occupies the same land. He was in his late 60s at the time and was making a fraction of what he once had.

It would be one thing if this sort of downward mobility were a reflection of the U.S. economy’s overall performance. But it’s not. Economic output is much higher, per person, than it was two decades ago and vastly higher than it was in Bessemer’s 20th century heyday. The bulk of the gains, however, have flowed to a narrow slice of workers — among the upper middle class and especially the affluent.

For many others, an Amazon job looks preferable to the alternatives, even if it is also part of the reason that so many American families are struggling. 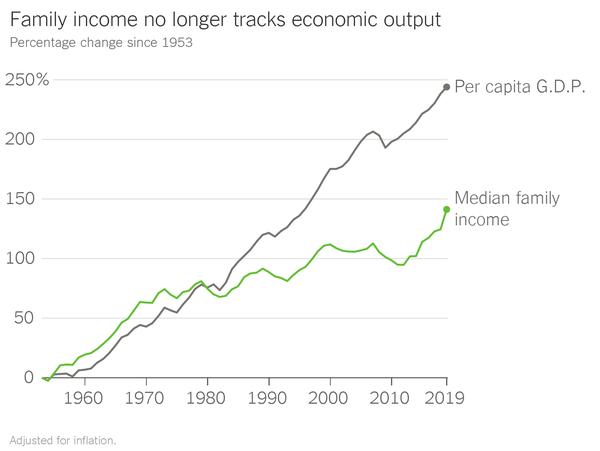 “The victory leaves Amazon free to handle employees on its own terms,” The Times’s Karen Weise and Michael Corkery write.

The union — the Retail, Wholesale and Department Store Union — made tactical errors, including being too optimistic and not focusing enough on local leaders, Jane McAlevey writes in The Nation.

Employers have such large advantages in union elections that some labor leaders believe they should use other approaches to make progress, like protests and P.R. campaigns, The Times’s Noam Scheiber writes.

Gov. Gretchen Whitmer of Michigan urged the Biden administration to ship extra vaccine doses to the state, where cases are surging.

Several states have expanded vaccine eligibility to include nonresidents, a step to get more college students inoculated.

Online schools are here to stay. But questions about remote learning persist.

The death toll from the Myanmar military’s crackdown on resistance to its rule passed 700 over the weekend.

An explosion caused a power outage at a major nuclear facility in Iran. ​Iranian officials called it an act of sabotage and suggested it had been carried out by Israel. The events injected new uncertainty into diplomatic efforts to salvage the 2015 nuclear deal.

A 20-year-old Black man died after a police officer shot him during a traffic stop in a Minneapolis suburb. Hundreds of people took to the streets to protest.

The case that ensnared Representative Matt Gaetz centers on a former local Florida official who is accused of multiple crimes, including bribery, stalking and corruption.

Maryland enacted a policing bill that limits the use of force and repeals a law shielding officers from discipline.

Donald Trump insulted Senator Mitch McConnell as a “dumb son of a bitch” at a retreat for Republican donors.

Legacies: “Even at his rowdiest and most celebrated, he was a vessel for profound pain,” Jon Caramanica writes about the rapper DMX, who died on Friday.

The emotional art of signing a song

If you’ve watched the national anthem before the Super Bowl, you may be familiar with the idea of signed singing. It involves a sign-language interpreter performing a song, often next to the singer. The best renditions don’t convey just the lyrics of a song; they convey its emotion.

A good performance “prioritizes dynamics, phrasing and flow,” Corinna da Fonseca-Wollheim writes in The Times. Deaf singers prepare by experiencing a song however they can. Mervin Primeaux-O’Bryant, a deaf actor and dancer, tucked a small speaker into his clothes, so that he could feel the vibrations of “Midnight Train to Georgia” while recording an interpretation for a series of American Sign Language covers of seminal songs by Black women.

“Sometimes interpreters don’t show the emotions that are tied to the music,” Primeaux-O’Bryant said. “And deaf people are like, ‘What is that?’”

In the performance, Primeaux-O’Bryant tugged at an invisible whistle to correspond to the woo-woo of the band’s horns. To interpret a drawn-out “oh,” he used movements that gently extended the words, his hands fluttering into his lap.

For more: Watch a clip of Primeaux-O’Bryant’s performance here. And GQ profiled Matt Maxey, who translates Chance the Rapper at his concerts.

Keep a stash of homemade samosas in your freezer. And for those observing Ramadan, find a collection of recipes here.

The pangram from Friday’s Spelling Bee was midbrain. Here is today’s puzzle — or you can play online.

Here’s today’s Mini Crossword, and a clue: Where grizzlies might beat the heat (three letters).

If you’re in the mood to play more, find all our games here.

Today’s episode of “The Daily” is about Europe’s vaccine rollout. On the Book Review podcast, Blake Bailey discusses his new biography of Philip Roth, and the debate over Roth’s legacy.