Here’s what you need to know.

(Want to get this briefing by email? Here’s the sign-up.)

Good morning. There are 50 days left until the end of the year.

We’re covering how Pfizer’s vaccine might be disseminated, trouble for Brexiteers and concerns over a rocky U.S. presidential transition. 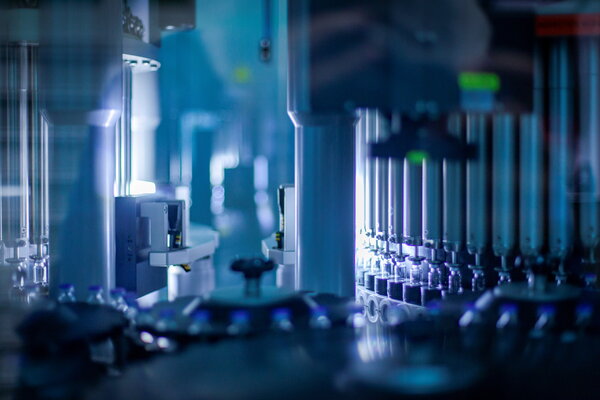 The complications of rolling out a coronavirus vaccine

After setting off celebrations with its announcement that its coronavirus vaccine candidate was more than 90 percent effective in trials, Pfizer now faces an enormous challenge: actually disseminating the vaccine, which must be kept at minus 94 degrees Fahrenheit (minus 70 degrees Celsius).

The next steps are complex. It must work with a network of companies, government agencies and health care workers to make sure orders are filled and workers are trained to administer the vaccine (and get recipients to return four weeks later for a second dose). Millions must also be persuaded to get the shots in the first place.

While Britain has ordered 40 million doses of Pfizer’s vaccine — enough for up to 20 million people — Prime Minister Boris Johnson cautioned that it was in “very, very early days,” as the treatment had not yet been approved. The government plans to vaccinate Britons at sites such as nursing homes, clinics and sports centers, and earmarked an extra 150 million pounds ($200 million) for general-practice doctors to help with the rollout.

New York City’s mayor is on the brink of shutting down all classrooms across the school system, by far the nation’s largest, as the city confronts a second wave.

Hungary is getting ready to bring an unproven Russian vaccine to its citizens. Foreign Minister Peter Szijjarto, who is in quarantine after testing positive for the virus, said on Wednesday that the Hungarian authorities were preparing a temporary six-month import permit for Russia’s Sputnik V vaccine for tests and trials.

A video of a man who died in the bathroom of the emergency room in Naples, Italy, from what might have been Covid-19 has sparked outrage.

Some Republicans are joining Democrats in showing concern over President Trump’s refusal to allow President-elect Joe Biden to proceed with the transition.

Several Senate Republicans, including Susan Collins, insisted that Mr. Biden should at least be given access to the President’s Daily Brief, which provides the nation’s most closely guarded intelligence secrets and an assessment of national security threats. Their call amounted to an acknowledgment that Mr. Biden would be certified as the victor in the election.

Democratic leaders warned that Mr. Trump’s stonewalling was damaging the country’s ability to deal with foreign leaders and the process of planning to handle the most high-risk period in the spread of the coronavirus.

Details: More Republicans have begun to acknowledge Mr. Biden’s victory, including Gov. Mike DeWine of Ohio and the veteran party operative Karl Rove, along with an editorial in The Las Vegas Review-Journal, a newspaper owned by the family of the megadonor Sheldon Adelson.

Voter fraud: Top government security and election officials released a joint statement on Thursday definitively declaring that the presidential election last week “was the most secure in American history” and making it clear that “there is no evidence” that any voting system had been compromised in any way.

Look ahead: Here’s what will happen between Election Day and Inauguration Day, including how the Trump campaign could try to intervene and why it would be unlikely to succeed.

As Prime Minister Boris Johnson of Britain attempts to negotiate a delicate post-Brexit trade agreement with the European Union, President Trump’s defeat has resulted in the loss of a powerful ally.

These shifting political forces came to a head on Wednesday in the sudden departure of the communications chief Lee Cain, an abrasive, plain-speaking former tabloid reporter and avowed Brexit campaigner. Now, as the Brexit trade negotiations enter the final stages, many have wondered whether Mr. Johnson is turning against the hard-line Brexit faction that helped him to power.

Speculation is also rife about the future of Mr. Johnson’s most influential and divisive aide, Dominic Cummings, the chief architect of the Leave forces’ Brexit referendum campaign and Mr. Cain’s political patron.

Trans-Atlantic relations: A failed negotiation with Brussels could stir up tensions between Mr. Johnson and President-elect Joe Biden even before they get to know each other. (The two have yet to meet in person.) It would almost certainly reverberate badly in Ireland, Mr. Biden’s ancestral homeland.

If you have 9 minutes, this is worth it

The ombudsman in the Australian state of Victoria is conducting an investigation into a strict, two-week lockdown placed on nine public housing towers in Melbourne, the state capital. Many of the towers’ residents are immigrants who say the restrictions felt like discrimination, and they are struggling to work through feelings of anger, trauma and confusion.

Details: The local authorities said the buildings had “explosive potential” because of their population density. But the actual concentration of infections within the towers was not out of line with rates in other parts of Melbourne.

Hong Kong: After the mass resignation of pro-democracy lawmakers in Hong Kong’s legislature, pro-Beijing legislators quickly announced that they would make full use of their new dominance to advance a slew of legal priorities that otherwise would have met fierce resistance.

BBC: A British equal rights commission that looked into unlawful pay discrimination at the broadcaster found no evidence of illegal pay practices but said that the broadcaster needed to “rebuild trust with women.” Female employees disputed the findings of the investigation, which examined only 10 examples out of a possible 100.

Nobel Peace Prize: The annual prize has been awarded at least six times in the past three decades to recipients such as Daw Aung San Suu Kyi of Myanmar and Abiy Ahmed, the prime minister of Ethiopia, whose recognitions are now being second-guessed.

Netherlands attack: At least one gunman opened fire outside the Saudi Embassy in The Hague on Thursday, a day after a World War I commemoration attended by European officials was attacked in Saudi Arabia. No one was injured in the latest attack, and it was not immediately clear whether it was related to the violence in Saudi Arabia.

Snapshot: Above, a recently unveiled golden sculpture in Ashgabat, the capital of Turkmenistan, honoring President Gurbanguly Berdymukhammedov’s favorite dog breed, the Central Asian shepherd, known locally as the Alabai. The opulent monument stands in stark contrast to the everyday lives of many residents who remain impoverished.

Lives Lived: Rosanna Carteri, the Italian soprano whose meteoric career came to an early end when she retired in her mid-30s, at the height of her artistry, died at 89 last month.

Cook: In this beef and cabbage stir-fry, coarsely crushed black peppercorns add a spicy bite to the meat, balanced by a simple rub of garlic, brown sugar and salt.

Watch: Henry Golding stars in “Monsoon,” an intimate drama about a man returning to the Vietnam of his childhood. We chatted with the actor last month.

Do: Reflect on past vacations — and daydream about future ones — with this list of treasured hotels from across the world.

The weekend is almost here. At Home has ideas on what to read, cook, watch, and do while staying safe at home.

Coral Davenport, who has covered climate change policy in the U.S. over three administrations, wrote about the profound impact that President Trump has had in hobbling the fight against global warming. Here’s an excerpt from what she wrote in our Climate Fwd: newsletter.

Washington is poised for another 180 on climate change. Having covered climate change policy since the George W. Bush administration, though, I’m used to whiplash.

Mr. Bush withdrew the United States from the Kyoto Protocol, the world’s first global climate treaty. Then his successor, Barack Obama, spent his two terms assuring the world that the United States was back, and ultimately helped to forge a new global climate accord in Paris. President Trump followed, pulling out of the Paris agreement and reversing many of Mr. Obama’s environmental protections. Now, President-elect Joe Biden says he’ll recommit to the Paris accord on Inauguration Day.

My colleague Lisa Friedman and I have spent the last three and a half years writing a string of what she calls “obituaries for Obama climate rules.” We expect to spend much of 2021 covering the rollbacks of the rollbacks.

There have always been pendulum swings of Washington, of course. But this isn’t just politics as usual. The nature of greenhouse gas pollution is that it’s cumulative, so the heat-trapping gases emitted as a result of the regulations Mr. Trump loosened or removed will remain for decades, regardless of changes in policy under Mr. Biden.

That’s it for this briefing. Have a restful weekend.

P.S.
• We’re listening to “The Daily.” Our latest episode is about the race to develop a coronavirus vaccine.
• Here’s our Mini Crossword, and a clue: Distinguished degree (three letters). You can find all our puzzles here.
• “The Decameron Project,” a collection of short stories about the pandemic commissioned by our magazine, is now out as a hardcover book.