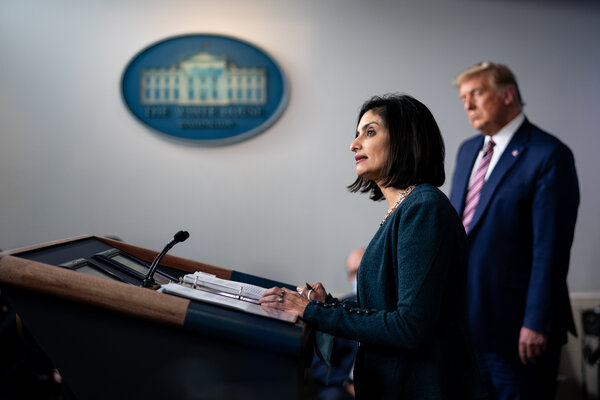 Re “Science Under Assault at Medicare and Medicaid,” by Peter B. Bach (Op-Ed, Dec. 2):

Everything we do at the Centers for Medicare and Medicaid Services serves one goal: to dismantle a status quo that thwarts innovative, high-quality health care.

Seniors wait years for Medicare access to technologies approved by the Food and Drug Administration. Our proposed rule will give seniors immediate access to safe devices while still incentivizing innovators to gather data supporting permanent coverage.

Likewise, we’ve fought the special interests that have long dictated the prices Americans pay for drugs. Medicare financially rewards providers who prescribe the highest cost drugs, often at seniors’ expense. We are fixing this.

And for many states, work incentives offer a pathway to sustainable coverage for adults on Medicaid. Supporters of the status quo often cite a flawed study to support their predetermined beliefs, ignoring that it was based on one state’s early experience with a program operational for only a few months. Innovative ideas to lift Americans from poverty deserve to be fully evaluated.

Fighting for change is harder than defending the status quo, but Americans deserve nothing less.

Seema Verma
Washington
The writer is administrator of the Centers for Medicare and Medicaid Services.

Re “In Blow to Trump, Barr Sees No Basis for Fraud Claims” (front page, Dec. 2):

Attorney General William Barr acknowledged that the Justice Department had found no voter fraud “on a scale that could have effected a different outcome.”

Has the Justice Department found any fraud anywhere in the United States during the 2020 presidential election? If so, I (and the American public) would sure like to see some evidence of fraud.

For Mr. Barr even to hint at any voter fraud, without producing the evidence, is merely another example of his slavish support of his boss.

Pope Francis Shows Us the Way

The words Pope Francis wrote were so touching and profound. They made me realize how as a country we have to put aside political parties and pick what is best from each party. We have to look at the world differently — at people differently — and come to a place where we can look at people in a more inclusive way.

We need to give back and we have to move forward with love in our hearts and gratitude. We have to be thankful and set aside judgment and anger. Only in doing that will we as individuals and as a country survive in the way God intended.

Once again, we get a premonition of movie theaters’ imminent demise. Coincidentally, I read Mr. Barnes’s piece just after seeing the wonderful new film “Mank” at my neighborhood art house, the Belcourt Theater, in Nashville. As the director Ava DuVernay says in the article, “Theaters aren’t going anywhere, at least not all of them.” I sure hope she’s right.

These cultural pillars — whether they’re showing the latest blockbusters or creative programming (“Mank” alongside “Citizen Kane,” which the Belcourt presented) — enrich modern life. Once a vaccine is widely available, we could all benefit from a night out at the movies.