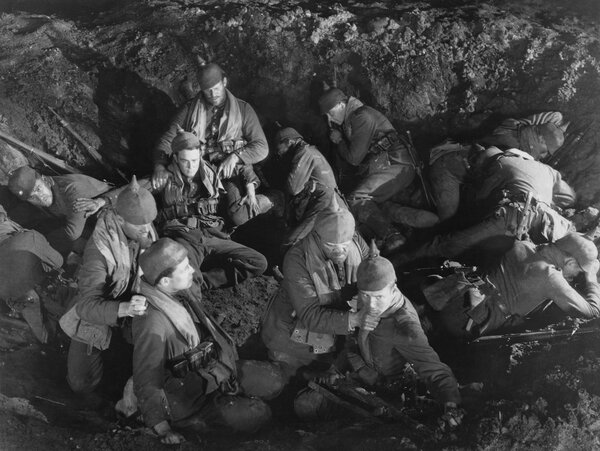 There have been three screen adaptations of “All Quiet on the Western Front,” Erich Maria Remarque’s 1928 novel of one soldier’s experience of the Great War. The first, released in 1930 and directed by Lewis Milestone, was a sensation. It won two Academy Awards (for outstanding production and best director) and wide praise from critics and moviegoers at the time. It remains one of the most acclaimed films of the era, routinely making lists of the greatest films of all time.

The second, released in 1979, was a made-for-TV movie starring Richard Thomas and Ernest Borgnine. It won an Emmy and a Golden Globe but, like a lot of TV movies from the 1970s and 80s, is largely forgotten.

The third adaptation of Remarque’s novel was released this year by Netflix. Directed by Edward Berger, a German-born director and screenwriter, it is a primarily German production that has received some praise for its harrowing recreations of trench warfare. And it is, indeed, a brutal and visually impressive depiction of the mind-numbing violence and chaos of the First World War.

I watched both the 1930 and the 2022 films this week. Not out of any particular project, but because I was interested to see the latter, and once I had done so, decided I would watch the first adaptation as well, to compare and contrast. I also skimmed through the book, which I last read in college, but which I still remember well.

I should say, here, that I don’t think the new film works.

Every filmmaker who adapts a work from another medium for the screen has to make a set of decisions about what to include and what to exclude, what to emphasize and what to ignore, what to actually adapt and what to leave on the page.

A good adaptation is not one that shows total fealty to the original source material. A good adaptation, instead, is one that chooses and changes with an eye toward the essence of that material. Luchino Visconti’s 1963 adaptation of “The Leopard” by the Italian writer Giuseppe Tomasi di Lampedusa is not faithful to every beat of the 1958 novel. But it captures its essence: the story of a changing society and those soon-to-be-left-behind as relics of a dead world.

The 1930 adaptation of “All Quiet on the Western Front” also captures the essence of the novel. Not just its antiwar message, but also its interest in the profound alienation of war, the terrible toll it takes on those enlisted to fight it and the very real sense that even soldiers who survive can never really come home. Remarque is not as interested in the war as geopolitics as he is in the war as human absurdity made manifest. Our cast of characters in the book isn’t particularly decent or virtuous or strong or smart; some of them are simply lucky, until they aren’t.

The 1930 film captures this perfectly. Our protagonist, Paul Bäumer, is just another boy, caught up in the patriotic fervor of 1914 along with his classmates. They enlist together and believe, all through basic training, that they are about to embark on an adventure. It is only when they see the war with their own eyes, and experience their first taste of combat, that the scales fall.

There is levity, yes, and there is camaraderie, but more often there is misery and fear and the constant presence of death. After three years in the trenches, the boys — or at least those who have survived — are permanently scarred, alienated from themselves as well as those around them. When Paul returns home after an injury, he attempts to relate to former teachers and other adults who experience the war from a distance, and he finds he doesn’t belong. It leads to this remarkable monologue, given as he tries to explain to another crop of young men, eager to fight, that war is folly.

This sequence is adapted from the novel. It’s also in the 1979 version (which I have not yet watched). It gets to the ultimate meaning of the work, and how it is not just about the soldier’s experience but also about the perils of nationalism, the vast gulf between propaganda and reality, and the pointlessness of wartime sacrifice.

But this sequence, which I think is the thematic heart of “All Quiet on the Western Front,” is not in this most recent adaptation. We have the same cast of characters, but there is no reckoning with the home front.

Instead, in this version — which begins in 1917 — we get an extended plot about the negotiations to end the war. I think I understand why the filmmakers made this decision from the perspective of story — it heightens the sense of urgency, knowing that our protagonist is essentially fighting against the clock. Unfortunately, it shows a profound misunderstanding of the source material.

The inclusion of this political subplot and the exclusion of Paul’s return home transforms “All Quiet on the Western Front” from a psychological examination of the soldier’s experience and a condemnation of war into a much simpler story of virtuous soldiers and cynical leaders who betrayed them. (It inches uncomfortably close, in fact, to the myths that sustained many Germans in the wake of their defeat.)

It does not help that this new adaptation devotes very little time to developing Paul and his classmates as people, separate from the direct experience of war. They are less characters than cutouts, and their deaths carry as much weight as that implies.

Once again, I do not need an adaptation to show total fealty to the original material. But whatever deviations are made should not fundamentally change the themes of that material, unless it’s done for good reason and with great care. This new movie has a lot going for it as a film depicting World War I; the problem is that it isn’t actually “All Quiet on the Western Front.”

Sam Adler-Bell on the letters of John le Carré for The Baffler.

Aaron Bady on Disney’s “Andor” for The Los Angeles Review of Books.

Spencer Kornhaber on Kanye West for The Atlantic.

Feedback If you’re enjoying what you’re reading, please consider recommending it to your friends. They can sign up here. If you want to share your thoughts on an item in this week’s newsletter or on the newsletter in general, please email me at [email protected] You can follow me on Twitter (@jbouie), Instagram and TikTok.

Photo of the Week

I was in Hawaii recently (thoughts on this at a later date) and took a lot of pictures. I used my phone as well as my more traditional cameras, but rather than use the phone photos as is, I did something a little different. I edited them with an eye toward brightening the highlights and darkening the shadows and then printed them on an Instax Link Wide Printer, which uses instant film to make prints. Then I scanned those prints. The effect is to make a digital photo look almost analog, with faded blacks from the instant film and reduced resolution from the scanning. I like it.

I’ve been on a mission to clean out my freezer and pantry, which made this recipe from Melissa Clark at New York Times Cooking a perfect candidate for dinner this week. I already had chorizo from the local butcher, and I always keep black beans and canned tomatoes on hand. The only ingredients I had to buy were the cilantro and the garnishes. I served this with steamed rice, and it was a pretty big hit with the kids.

1 (28-ounce) can diced plum tomatoes with their juices

Heat oil over medium heat in a large Dutch oven or heavy-bottom pot. Add onion and cook until softened, 5 to 10 minutes. Stir in chorizo and cilantro stems and cook 5 minutes over high heat, or until much of the liquid has evaporated.

Stir in beans, tomatoes and their liquid, and 1 cup water. Bring mixture to a boil over high heat; reduce to medium.