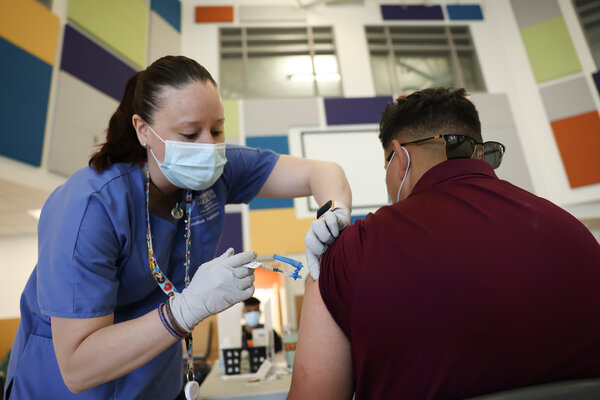 Ms. Stauffer is a freelance writer and the author of “An Ordinary Age,” a book about young adulthood. Mr. Shihipar is a public health researcher at Brown University School of Public Health.

Though young people in the United States are less likely to experience severe illness or death from the coronavirus, they’ve made substantial sacrifices to prevent its spread. They experienced disproportionate job loss and loss of loved ones. Many had to forgo traditional milestones of young adulthood, like graduations, proms and moving out on their own.

They are now being asked to make a much smaller sacrifice — getting vaccinated. And yet data from the Centers for Disease Control and Prevention shows that young people aged 18 to 24 have the lowest rates of vaccination among adults, with 44 percent fully vaccinated. Even in states like Vermont, where vaccine coverage is high, this group has the lowest rates of vaccination compared with older age groups.

After such an awful year, the fact that younger people are less likely to embrace a simple measure to end the pandemic faster has puzzled experts and commentators alike, many of whom have argued that young adults “generally feel invincible.” Recently, in a video with the singer Olivia Rodrigo, Dr. Anthony Fauci, director of the National Institute of Allergy and Infectious Diseases, said vaccine hesitancy in young people is, in part, because “young people feel invulnerable.”

But the reasons vaccination rates are lagging in this group are more complex than that.

The idea that young adulthood is a responsibility-free time that cultivates feelings of invincibility skims over realities. Unemployment rates for young people in the United States were high before the pandemic, but unemployment among young workers aged 16 to 24 increased to 24.4 percent in spring 2020 from 8.4 percent in spring 2019. Young people are also stressed: One study found 54 percent of young adults aged 18 to 25 reported symptoms of anxiety and depression during the pandemic, and their rates of mental health challenges exceeded any other adult age category.

“While considered a monolithic group, young adults’ experiences are shaped by inequality which manifests as differentially distributed resources leading to disparate experiences,” said Dalal Katsiaficas, an associate professor of educational psychology at the University of Illinois at Chicago.