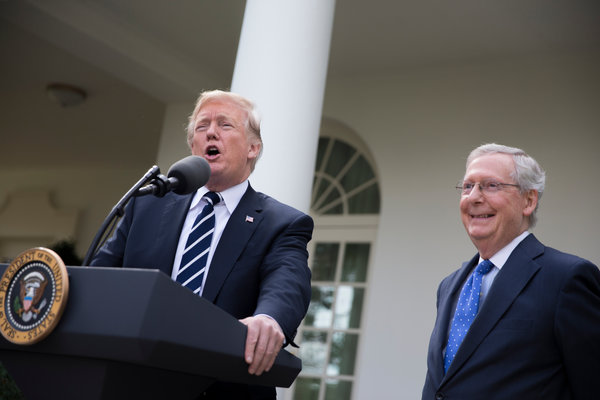 Donald Trump is at it again. Anyone who does not profess undying loyalty to him gets thrown under the bus. Mitch McConnell is the latest such victim. Even now as a private citizen Mr. Trump continues to try to maintain control of the Republican Party. He hurls insults at Mr. McConnell and takes a swipe at the senator’s wife, Elaine Chao, all because Mr. McConnell had the nerve to state unequivocally that Mr. Trump had incited the insurrection on the Capitol.

For this Mr. Trump has now declared Mr. McConnell an enemy of the Republican Party.

Those Supertall Towers: Schadenfreude Is Built In

Re “Creaks, Leaks and Complaints in a Towering Symbol of Luxury” (front page, Feb. 4):

My schadenfreude was showing as I read of problems with supertall towers like the “pencil building” at 432 Park Avenue in Manhattan. On the inside, billionaire residents must endure groaning walls, unexpected drafts and frequent geysers from burst water pipes. Such hardships are compounded by having to pay $15,000 a year in restaurant fees for the privilege of no longer getting a free breakfast at the in-house restaurant.

Here on the outside, we ordinary folk must gaze up at this blemish on Manhattan’s revered skyline. The only thing more aesthetically offensive than 432 Park would be a rubber Groucho nose on Michelangelo’s “David.”

A wrecking ball, anyone?

Your article says Sarina Abramovich, a resident of 432 Park Avenue, is “speaking out on principle” about myriad maintenance issues in the building. Her apparent awareness “that the plight of billionaires won’t garner much sympathy” is true enough. But having first spent millions for space in a soaring “middle finger” tower might be the real issue.

These outrageously minimalist shafts are structures without architecture, tasteless monoliths that give “less is more” a bad name. During our last visit to New York, my wife and I were in Central Park looking toward these intrusive steel and glass toothpicks, saddened to observe the loss of a once beautifully balanced visual relationship between nature and urbanity.

Sorry, but no sympathy on this end for the folks at 432.