Myanmar’s decade-long experiment in conditional democracy just ended in a textbook example of a coup — a coup that was a pre-emptive strike.

In the early hours of Monday, as the new national Parliament was scheduled to convene for its first session, the military, known as the Tatmadaw, announced that it was taking over, alleging fraud during the last general elections in November. It arrested Daw Aung San Suu Kyi — formally the state counselor, but really the country’s de facto leader — as well as other senior officials and a handful of prominent political and social figures.

The Tatmadaw invoked the Constitution (which it drafted back in 2008) to declare a state of emergency for a year; the already-powerful commander in chief, Senior Gen. Min Aung Hlaing, is now essentially a dictator. He has pledged “to practice the genuine, discipline-flourishing multiparty democratic system in a fair manner” and has announced plans to hold another election at an unspecified date.

Why this? Why now? The military has manufactured a crisis so that it could step in again as the purported savior of the Constitution and the country, while vanquishing an ever-popular political foe.

But it may have acted too late. Raw power is its own reward only in appearance.

After one term in office, Ms. Aung San Suu Kyi’s National League for Democracy recently bested its landslide victory of 2015. In November, despite the Covid-19 pandemic, more than 70 percent of eligible voters turned out and handed the N.L.D. more than 80 percent of the vote. International and domestic observers, including from the Carter Center and the People’s Alliance for Credible Elections, declared the election to be free and fair. It was an irrefutable popular endorsement of the administration.

But the military still has much power, constitutionally guaranteed: It controls the ministries of defense, home affairs and border affairs; 25 percent of seats in the national and regional assemblies are reserved for it; it has veto authority over amendments to key provisions of the Constitution. The Tatmadaw’s economic interests are largely untouched, with a vast defense budget and steady income streams from holding companies. It can fight various groups around the country in supreme confidence that it will face no legal repercussions.

So why take over if you’re already in charge? Doesn’t the Tatmadaw only stand to lose from staging a crude, retrograde coup?

There is much animus between Ms. Aung San Suu Kyi and General Min Aung Hlaing. The two have rarely met since 2015, often only at strained public events.

Beyond the personal tensions, there is, of course, institutional antagonism. For some three decades, the N.L.D. was subject to crushing persecution at the hands of the Tatmadaw and the security forces; hundreds of the party’s members were arrested, tortured, killed or driven into exile.

In some respects, Monday’s coup looks like a petulantly personalized contest between two elites, both Buddhist and from the ethnic Bamar majority, and both infused with a born-to-rule mentality. 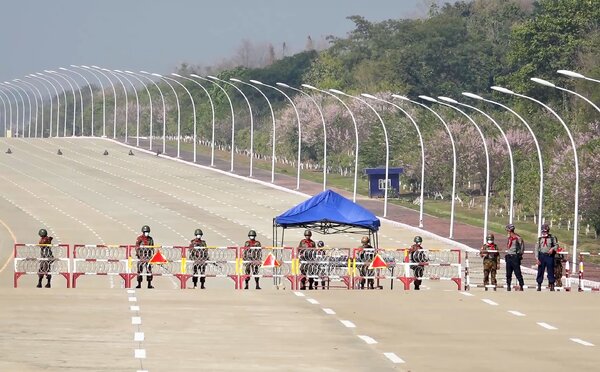 Activists have criticized the N.L.D. for failing to repeal repressive laws or speak out about political prisoners and attacks on the media. Ms. Aung San Suu Kyi herself has been accused, by both Myanmar political organizers and Western analysts, of displaying a sometimes withering disdain for civil society, journalists and intellectuals.

Some N.L.D. members quietly admitted to me over the past five years that a precarious modus vivendi had developed with the military: The administration seemed to pursue a democratization agenda predicated on avoiding pushback from the generals.

Then came the party’s victory in the November election, and another sweeping mandate for a second term. That seemed to upset the uneasy balance of power in place, at least in the eyes of the Tatmadaw, and to threaten the military’s prerogatives and privileges. The coup may have been a pre-emptive strike against its losing ground.

Perhaps especially, and personally, for General Min Aung Hlaing. He was scheduled to step down this year, after the retirement age for his position was moved back, five years ago, from 60 to 65. Diplomats have told me privately that he is concerned that, once out of office, he might be vulnerable to prosecution, at least internationally, for his leadership over the ethnic cleansing of Rohingya Muslims, among other things. (Yet now, Ms. Aung San Suu Kyi will no longer be around to defend him, or the Myanmar military, against charges of genocide, as she did before the International Court of Justice in 2019.)

One open question about the coup, however, is how popular it will be within the ranks of the military. Given the groundswell of support for Ms. Aung San Suu Kyi in November, soldiers, too, presumably voted for the N.L.D. I know of no official data showing this, but, to take one example, the party won seats, locally and nationally, representing the township of Kengtung, the home of a regional military command and thousands of troops in Shan State, in the eastern part of the country.

At a minimum, the coup, being a major step backward, may undermine morale and cohesion among the troops. Decades of armed conflict with several ethnic groups have inflicted numerous casualties on ordinary soldiers. Desertion has been on the rise. Can the generals expect full compliance from the institution after the coup?

By deploying the dirty playbook of clichéd dictators, General Min Aung Hlaing and the new junta may have thwarted their nemesis, and power is theirs, for the time being. But the Tatmadaw now risks widespread instability and faces the very real challenge of confronting an entire nation, including members of its own ranks, that has developed a taste for democracy. By dragging the entire country into the depths of their praetorian aspirations, Myanmar’s generals are working against their own self-interest.

David Scott Mathieson is an independent analyst with more than 20 years of experience working on Myanmar.