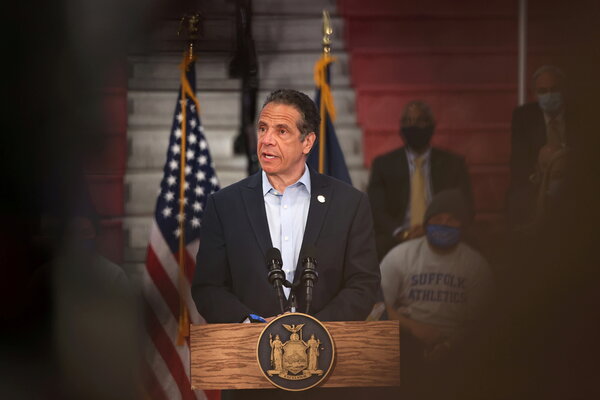 Here is my message to Gov. Andrew Cuomo: When the allegations of sexual misconduct came out, I agreed with your stance of not resigning and that we should let the investigation take place and see what the conclusions are.

Now that the investigation is done and the findings of the report have been shared, it is time to resign. This will not take away from your previous accomplishments as governor.

So, Governor Cuomo, do the right thing, apologize to all of these women and the citizens of New York and resign. The faster you do it, the better it will be for everyone.

Choosing to challenge the conclusions of the report will cause more pain, suffering and trauma to all involved as well as provide political instability should the New York State Assembly under Democratic leadership decide to impeach you.

I am all for replacing Andrew Cuomo, but I consider him a good governor. We are dealing with a dangerous Republican opposition that is beholden to a psychological destroyer. So because the times are threatening our Republic and our nation’s health, to replace Mr. Cuomo at this time can be a tricky proposition.

Apart from any political issues, if Gov. Andrew Cuomo did what he is accused of doing, he should resign. If he truly can’t comprehend that even the behaviors he admitted to are inappropriate and meet the definition of sexual harassment, and that “that is just not who I am” is not a defense, then he should resign.

His relentless bullying of Mayor Bill de Blasio over the years makes it hard to believe his denial that he abused his power.

He is right about one thing: He lived his adult life in public view and we did see his behaviors. What he can’t seem to accept is that they were not OK and that those behaviors meet the standard of sexual harassment.

I do not think it is proper for President Biden to call for the resignation of Gov. Andrew Cuomo. I think it is up to the New York State Legislature, the members of the governor’s Democratic Party and, if necessary, the voters in New York, Democrats and Republicans, to make that choice.

The president should not use the prestige of his office to influence an issue that should be resolved in the state of New York.