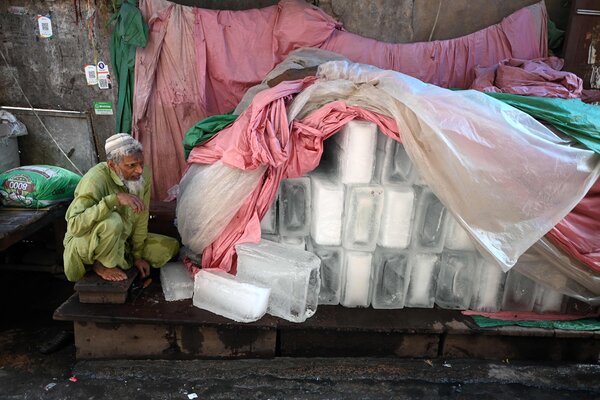 Dr. Singh is a climate change researcher at the Indian Institute for Human Settlements, Bangalore.

BANGALORE, India — I am no stranger to heat. I know the stifling breath of “loo,” the hot and dry summer winds that blow over North India and Pakistan. “Take a scarf to cover your head, keep a bottle of water with you” was the advice my mother gave me every summer.

Delhi is a city of violent weather and especially excruciating summers. But on a visit there in April — springtime — I was ill equipped for 111 degrees Fahrenheit heat. Caught outdoors from noon to 3 p.m., I had to choose between a packed bus with air-conditioning and an emptier one without it to reach home. With reports of increasing Covid-19 cases weighing on me, I chose the hot bus.

Despite plenty of water and a cool house to rest in, I felt the effects of heat exposure a day later. I woke at 5 a.m., extremely tired, nursing a throbbing headache and completely dehydrated.

And yet, I am one of the privileged. In India, higher temperatures are coming earlier and staying longer every year. The most vulnerable are bearing the impacts of this prolonged heat now. Those who can cool will cool, those who can’t, cope.

The heat wave that has been blanketing most of India and Pakistan since March is in line with what climate scientists have been projecting for South Asia: Temperatures typically seen in May through June were already here in March through April, leaving in their wake withered wheat crops, reduced mango harvests and a population confused about the spring that went missing. A study out on Monday shows that climate change has made this heat wave 30 times more likely compared with occurrences in preindustrial times.

My research examines why certain people choose to adapt to climate change while others don’t think of it as an urgent threat or can’t adapt because they lack the means. I recently finished a grueling three years assessing the latest research for the Intergovernmental Panel on Climate Change’s Working Group II Report on Climate Impacts, Adaptation, and Vulnerability. At over 3,600 pages, the report presents a litany of planetary devastation and solutions to deal with it.

In the Asia chapter, which I co-authored, we document how the wounds that climate change has inflicted here are deep: disproportionate losses and damages to lives and livelihoods across forest and water resources, and agriculture. Cities are particularly at risk — at global warming of 1.5 degrees Celsius, cities like Kolkata, with a population of about 15 million, will experience annual record heat waves, like the devastating one in 2015 that claimed roughly 2,500 lives across the country. On every global map on vulnerability and exposure to climate change, South Asia stands out, often tinted dark red or an alarming purple to denote higher levels of risk. Not shown on these maps are centuries of colonization and resource extraction that have made people more vulnerable to higher temperatures and less equipped to adapt to increasing climate risks.