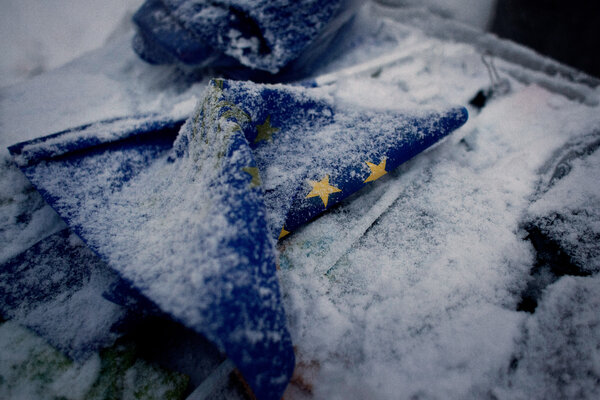 While some Russian soldiers in Ukraine are voting with their feet against Vladimir Putin’s shameful war, their hasty retreat doesn’t mean that Putin is surrendering. Last week, in fact, he opened a whole new front — on energy. Putin thinks he’s found a cold war that he can win. He’s going to try to literally freeze the European Union this winter by choking off supplies of Russian gas and oil to pressure the E.U. into abandoning Ukraine.

Putin’s Kremlin predecessors used frigid winters to defeat Napoleon and Hitler, and Putin clearly thinks it’s his ace in the hole to defeat Ukraine’s president, Volodymyr Zelensky, who told his people last week, “Russia is doing everything in 90 days of this winter to break the resistance of Ukraine, the resistance of Europe and the resistance of the world.”

I wish I could say for certain that Putin will fail — that the Americans will outproduce him. And I wish I could write that Putin will regret his tactics, because they will eventually transform Russia from the energy czar of Europe to an energy colony of China — where Putin is now selling a lot of his oil at a deep discount to overcome his loss of Western markets.

Yes, I wish I could write all of those things. But I can’t — not unless the U.S. and its Western allies stop living in a green fantasy world that says we can go from dirty fossil fuels to clean renewable energy by just flipping a switch.

I wish that were possible. This column has been devoted for 27 years to advocating clean energy and mitigating climate change. I’m still all in — all in — on those ends. But you can’t will the ends unless you’ve also willed the means.

And we demonstrably have not done that!

Despite all the wind and solar investments in the past five years, fossil fuels — oil, gas and coal — still accounted for 82 percent of total world primary energy use in 2021 (required for things like heating, transportation and electricity generation), down only three percentage points in those five years. In America alone in 2021, about 61 percent of electricity generation was from fossil fuels (primarily coal and natural gas) while about 19 percent was from nuclear energy and about 20 percent was from renewable energy sources.

In a world of growing, energy-hungry middle classes in Asia, Africa and Latin America, it takes huge amounts of new clean energy to make even a small dent in our overall energy mix. It’s not a matter of flipping a switch. We have a long transition ahead, and we will make it only if we urgently embrace smart, pragmatic thinking on energy policy, which in turn will lead to greater climate security and economic security.

Otherwise, Putin can still hurt Ukraine and the West badly.

Before the Ukraine war started, Russia provided nearly 40 percent of the natural gas and half of the coal Europe used for heat and electricity. Last week, Russia announced it was suspending most gas supplies to Europe until Western sanctions on Russia are lifted. Putin has also vowed to cut off all oil shipments to Europe if the Western allies carry out their plan to limit what they will pay for Russian oil.

Without sufficient affordable alternative supplies of natural gas, The Financial Times reported, some factories in Europe have had to shut down, “unable to pay the cost of fuel.” Energy bills — up 400 percent in some European countries — “are pushing consumers to near poverty.”

For some the choice this winter could be heat or eat. This is forcing their governments to offer massive subsidies, distorting their budgets, in hopes of staving off populist backlashes and pressures to get Ukraine to surrender to Putin — and some are also going back to burning coal.

If we want to get oil and gas prices down to reasonably low levels to power the U.S. economy and, at the same time, help our European allies escape the vice grip of Russia while we all also accelerate clean energy production — call it our “Energy Triad” — we need that transition plan that balances climate security, energy security and economic security.

President Biden just gave a huge boost to U.S. clean energy output with his climate bill, which also encourages cleaner gas and oil production through smart incentives to curb methane leakage by oil and gas producers and by incentivizing them to invest more in carbon-capture technologies.

But the most important factor for quickly expanding our exploitation of oil, gas, solar, wind, geothermal, hydro or nuclear energy is giving the companies that pursue them (and the banks that fund them) the regulatory certainty that if they invest billions, the government will help them to quickly build the transmission lines and pipelines to get their energy to market.

Philip Anschutz, the conservative billionaire who made a fortune drilling for oil, has been trying to build a power line to connect his giant wind farm in Wyoming with his proposed market in Las Vegas. Planning for that line began 17 years ago, and only this past December did Anschutz finally reach “an agreement with a Colorado ranch to traverse its land” to get his clean electrons to market, Bloomberg reported.

“Many of the best places to develop clean power are far-flung deserts and plains,” the story added, “but stringing power lines to reach them can take a decade or more because of approvals needed from state agencies, the federal government and private landowners. The delays are one of the biggest threats to U.S. President Joe Biden’s ambitions to rid power grids of fossil fuels.”

To win the critical support of Senator Joe Manchin for Biden’s climate package, Senate Democratic leaders, led by Chuck Schumer, agreed to a side deal — to back a bill that would streamline, but not eliminate, environmental and other regulatory reviews that often bog down the permitting of transmission lines and pipelines needed to make gas, oil, solar and wind projects economically viable. If our main route to decarbonization is going to be through electrification of vehicles and power generation by renewables, we will need more transmission pathways to move more electricity around — and we’ll need more natural gas backup systems for when the sun doesn’t shine and the wind doesn’t blow.

For those and other reasons, Biden wants this permitting package to go through, as does almost every Democratic senator. Schumer plans to attach it to the continuing resolution bill that Congress must pass to keep the government open after the fiscal year ends Sept. 30. Unfortunately, Senator Bernie Sanders has come out against it — as have more than 70 Democratic House members, mostly from the Congressional Progressive Caucus. It is not clear how many will go so far as to block the government funding bill if it includes this permitting legislation, but it is not zero.

I don’t know who’s more irresponsible: the moral-preening progressives who want an overnight immaculate green revolution, with solar panels and wind farms but no new transmission lines or pipelines, or the cynical, phony tough-guy Republicans, who’d rather see Putin win and our energy companies lose than do right for America and Ukraine by agreeing with Biden.

I can’t repeat this enough: U.S. energy policy today has to be the arsenal of democracy to defeat petro-Putinism in Europe, by providing desperately needed oil and gas to our allies at reasonable prices so that Putin cannot blackmail them. It has to be the engine of economic growth that provides the cleanest and most affordable fossil fuel energy as we transition to a low-carbon economy. And it has to be the vanguard for scaling renewables to get the world to that low-carbon future as fast as we can.

Any policy that doesn’t maximize all three will leave us less healthy, less prosperous and less secure.