Neither Joe Biden nor Kamala Harris has made a clear statement in favor of expanding the Supreme Court beyond its current size. But that hasn’t stopped conservatives and Republicans from denouncing — perhaps with a hint of fear — their as-yet unarticulated plan to do so.

Amazingly, this particular argument against expanding the Supreme Court hinges on preserving the norms of American democracy. Having torched those norms in pursuit of a conservative judiciary, Republicans want their opponents to play by the old rules, as if the game is theirs alone to shape. A typical response comes from Rich Lowry of National Review magazine who, in a comment on Twitter directed at Biden’s reluctance to answer a question about court expansion, declared,

You can’t be the candidate of norms and refuse to say whether or not you are going to undertake a truly radical attempt to destroy the legitimacy of one of our key governing institutions.

All of this comes as Republicans begin the confirmation hearing for Amy Coney Barrett, President Trump’s nominee to fill the Supreme Court vacancy left by the death of Ruth Bader Ginsburg. Four years ago, as you surely know by now, Republicans told us that it was voters who ought to decide what happens when a vacancy arises in an election year. “We’re following the Biden rule,” Mitch McConnell, then as now the Senate majority leader, said at the time. “Biden was chairman of the Judiciary Committee in 1992, in a presidential election year, he said the Senate should not act on filling a Supreme Court vacancy if it had occurred that year.” But with a 6-3 conservative majority on the near horizon, that “rule” is out the door, supplanted by the will to power.

“This is an election year,” Lindsey Graham said on Monday, speaking as the chairman of the Senate Judiciary Committee:

There is nothing unconstitutional about this process. This is a vacancy that occurred due to the tragic loss of a great woman, and we will fill that vacancy with another great woman. The bottom line is that the Senate is doing its duty constitutionally.

Graham is right. There is nothing unconstitutional about the hearing, nor is there any law that says Republicans can’t put Barrett on the court during or after an election. In fact, Trump and Senate Republicans could fill any vacancy that emerged before the seating of a new Congress on Jan. 3 and the inauguration of a new president on Jan. 20. There is nothing in the rule book to say otherwise. 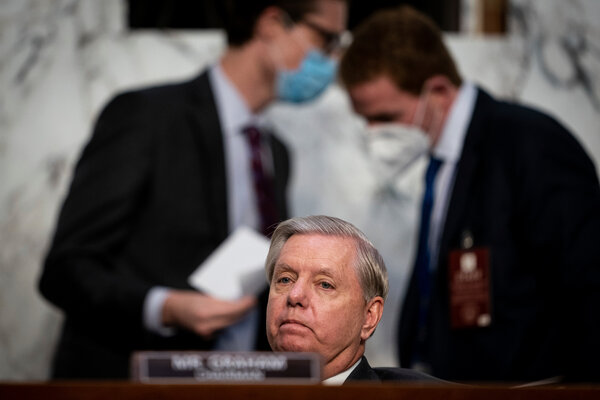 This view — that if it’s allowed, it’s allowed — has been the dominant ethos of Republicans and their conservative allies going back at least as far as President Obama’s second term. It’s how they justified their blockade of the U.S. Court of Appeals for the District of Columbia Circuit, filibustering Obama’s nominees and denouncing as “court packing” — a familiar refrain — his attempt to fill the vacancies. It’s also how they justified the subsequent obstruction of Merrick Garland’s path to the Supreme Court, arguing outright that the Senate’s constitutional power to “advise and consent” also included the right to deny a hearing altogether.

Of course, what’s good for the goose is also good for the gander. Once you reject the constraints imposed by norms in favor of an instrumentalism bound only by the text of the Constitution — an “originalist” politics, perhaps — you cannot then turn to those norms to protest an escalatory response or reprisal. Or rather you can, but no one has to take you seriously when you do.

The same Constitution that says Republicans can confirm Barrett weeks before the election, that allows them to retroactively impose a new and novel partisan requirement (same-party control of the Senate) on judicial confirmations, also says Congress can add as many seats to the Supreme Court as it wishes. It says Congress can strip the Supreme Court of its jurisdiction to hear certain kinds of cases. It says the judiciary is as subject to “checks and balances” as any other institution in American government and that the people through their elected officials have the right to discipline a court that works against their will.

If the Republican Party and its conservative defenders are going to operate according to a narrow, legalistic parsing of the rules — if they’re going to do anything and everything that isn’t expressly forbidden by the text, all in service of minority rule on an already counter-majoritarian playing field — then the only rational response is for Democrats to do the same. To adopt forbearance would be to accept defeat.

This may sound like it would lead to an ever-escalating arms race. But it doesn’t have to. The promise of retaliation can bring a new equilibrium. Expand the court, nullify the conservative advantage — show that all of the games and scheming were in vain — and you may create the space for an acceptable compromise around the scope and power of the judiciary.

If they take power in January, Democrats can take the so-called high road and choose not to subject the court to checks and balances. Judging from the relentless effort of the Republican Party to seize and maintain control of the courts, though, Democrats should know that to disarm in the face of provocations like the forestalling of Garland and the confirmation of Barrett is to invite further aggression. The only way to win this game is, in fact, to play it.