Marjorie Taylor Greene is the QAnon congresswoman, a far-right influencer and gun fanatic who dabbles in anti-Semitism and anti-Muslim bigotry. She endorsed violence against congressional leaders, claimed that the Parkland and Sandy Hook shootings were faked and once shared an anti-refugee video in which a Holocaust denier says that “Zionist supremacists have schemed to promote immigration and miscegenation.”

She showed a little contrition on Wednesday with a qualified apology to her Republican colleagues. For this, she received a standing ovation. On Thursday, after an afternoon of deliberation, the House of Representatives voted to strip Greene of her committee assignments. Or rather, Democrats voted to strip her of her committee assignments. All but 11 Republicans voted in her favor.

Although it is tempting to make this episode another parable exemplifying the “Trumpification” of the Republican Party, it’s better understood as yet another chapter in an ongoing story: the two-step between the far right and the Republican Party and the degree to which the former is never actually that far from the latter.

There’s a story conservatives tell about themselves and their movement. It goes like this: In the mid-1960s, William F. Buckley Jr., the founder of National Review, made a decisive break with the John Birch Society, an ultra-right-wing advocacy organization whose popular co-founder, Robert Welch, believed that the United States was threatened by a far-reaching “Communist conspiracy” whose agents included former President Dwight Eisenhower and Chief Justice Earl Warren.

“How can the John Birch Society be an effective political instrument while it is led by a man whose views on current affairs are, at so many critical points, so critically different from their own, and, for that matter, so far removed from common sense?” Buckley asked of Welch in a blistering 1962 essay. “There are, as we say, great things that need doing, the winning of a national election, the re-education of the governing class. John Birch chapters can do much to forward these aims, but only as they dissipate the fog of confusion that issues from Mr. Welch’s smoking typewriter.”

This attack on Welch, if not the John Birch Society itself, continued into the 1964 presidential election. Birchers helped carry Senator Barry Goldwater of Arizona to victory in the Republican primary with skillful moves on the convention floor, in what would be their greatest display of strength before a final repudiation from Buckley and other leading lights of the conservative movement the following year. “I am not a member” of the group, Ronald Reagan declared in September 1965, “I have no intention of becoming a member. I am not going to solicit their support.”

With this, Welch and the John Birch Society were pushed to the fringe. The conservative movement would win elections and power with an appeal to the mainstream of American society.

Or so goes the story.

Welch and the John Birch Society were pushed to the margins. The extremist tag, as Lisa McGirr notes in “Suburban Warriors: The Origins of the New American Right,” did real damage to the organization’s ability to sustain itself: “The society was simply too strongly identified with minoritarian utterances and outdated conspiracies to remain an important vehicle for channeling the new majoritarian conservatism.” However, she continues, “The sentiments, grievances, and ideas the organization helped to define mobilize lived on and were championed by organizations and political leaders who thrust forth a new populist conservatism.” 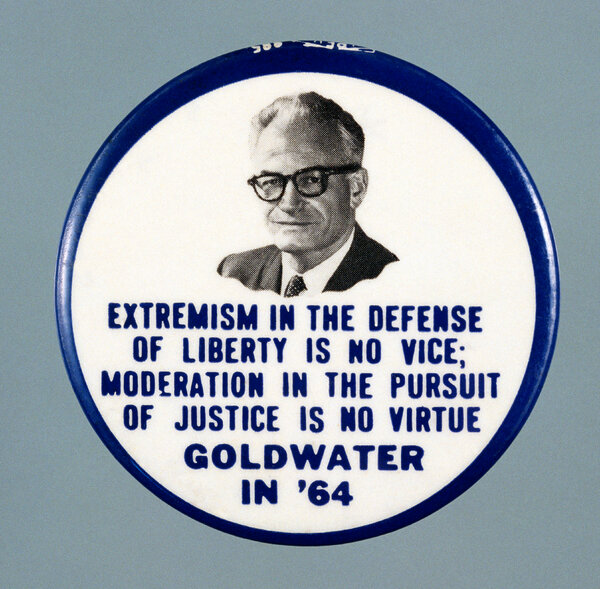 The hard right wasn’t at the front of the charge, but it wasn’t purged either. Instead, it served as part of the mass base of activists and voters who propelled conservative leaders to prominence and conservative politicians to victory. If there were boundaries between the mainstream and the extreme right, they were — as Daniel Schlozman and Sam Rosenfeld argue in “The Long New Right and the World It Made” — “porous,” with movement from one to the other and back again. Several key figures of the New Right and the Christian Right of the 1970s and ’80s were, Sara Diamond points out in “Roads to Dominion: Right-Wing Movements and Political Power in the United States,” “veterans of the 1964 Goldwater campaign” who were “steeped in the conservative movement’s dual strategy of forming wide-ranging political organizations and activism based on more specific issues.”

To illustrate their point about the porousness of the conservative movement, Schlozman and Rosenfeld highlight a series of interviews in which a “who’s who of the right of the late 1970s and early 1980s” sat for wide-ranging discussions with The Review of the News, a front publication of the John Birch Society. Figures from inside the Reagan administration, like Jeane Kirkpatrick and Anne Gorsuch (mother of Neil), then the administrator of the Environmental Protection Agency, made an appearance, as did lawmakers like Jesse Helms of North Carolina, Dick Cheney of Wyoming and Chuck Grassley of Iowa.

This is a column, and I may be flattening some of the nuances here for the sake of brevity. But the essential point is sound: Extremism has always had a place in mainstream conservative politics, and this is especially true at the grass-roots level.

What’s distinctive right now isn’t the fact that someone like Greene exists but that no one has emerged to play the role of Buckley. A longtime Republican leader like Mitch McConnell can try — he denounced Greene’s “loony lies and conspiracy theories” as a “cancer” on the party — but after he served four years as an ally to Donald Trump, his words aren’t worth much.

Those once-porous borders, in other words, now appear to be nonexistent, and there’s no one in the Republican Party or its intellectual orbit to police the extreme right. Representative Greene is the first QAnon member of Congress, but she won’t be the last and she may not even ultimately be the worst.