This is an article from World Review: The State of Democracy, a special section that examines global policy and affairs through the perspectives of thought leaders and commentators, and is published in conjunction with the annual Athens Democracy Forum.

In recent years a handful of African countries, including Sudan and Algeria, have said goodbye to longstanding authoritarian rulers, creating openings, however small, for democratic change.

The West African nation of Togo, however, remains firmly under the thumb of a military-backed regime — that of the Gnassingbé family, the longest-ruling dynasty on the continent. In recent years, the regime has fully embraced the tactics of digital repression to extend its longevity, outflanking (for now) an increasingly emboldened community of online activists.

The citizens of Togo, a country of roughly eight million people between Ghana to the west and Benin to the east, have lived for more than 50 years under a brutal dictatorship. The nation’s military regime came to power in 1967, with the installation of the army’s chief of staff, Gnassingbé Eyadéma, as president. Mr. Eyadéma died in 2005, bringing to an end a ruthless 38-year reign marked by widespread human rights abuses. In the months after Mr. Eyadéma’s death, the military-backed candidacy of his son, Faure Gnassingbé, proved victorious in an election marred by serious fraud allegations.

The generations of Togolese activists who had fought the dictatorship of Gnassingbé the First hoped his passing would bring an end to the nation’s tyranny, paving the way for a brighter democratic future. Instead, Mr. Eyadéma’s death, in February 2005, and the election of his son in April led only to horrific violence: Between 400 and 500 people were killed during those months, with thousands more wounded, according to a United Nations report.

In response to the arrival of Gnassingbé the Second, a new generation of activists came to the fore. The internet was their most powerful tool, and as internet penetration in Togo grew, so did the democratic resistance movement.

I was one of those activists, and like many of my fellow dissidents I have felt empowered in the years since Mr. Gnassingbé’s rise by the ability to denounce the government — its corruption and gangsterism — on social media. “You may rule over Togo with no accountability,” I wrote in a 2014 Facebook post, addressing the administration, “but we citizens rule over the internet, and we will hold you accountable.”

Unfortunately, the Gnassingbé government isn’t keen on any form of resistance, whether in the streets or online. (Mr. Gnassingbé was re-elected in 2010 and 2015 amid accusations of fraud by Togo’s opposition.) In fact, in recent years it has become increasingly obvious that we underestimated the government’s ability to adapt its repressive methods to the digital world.

In the late summer of 2017, major protests quickly spread across the country in support of the opposition’s demands that President Gnassingbé resign and that term limits, abolished by his father in 2002, be reinstated. During the monthslong demonstrations, tens of thousands of protesters chanted “Faure Must Go,” a slogan coined by an activist movement that I co-founded in 2011 with other young Togolese dissidents living in and outside the country. The Faure Must Go movement relied on decentralized digital organizing, which helped many of us maintain our anonymity, protecting us from direct physical repression by leaders.

However, the government’s response to the 2017 protests made it clear that we weren’t as secure as we had thought. In September, the regime shut down the internet for nine days. In the ensuing months, hundreds of protesters were arrested and several were killed, including a 9-year-old boy, according to Amnesty International.

During this time, we received information suggesting that some activists had been arrested and tortured by the government based on evidence gleaned from private conversations that had taken place on WhatsApp, the encrypted messaging app. This gave us a strong hint that the government was spying on us, thus destroying our anonymity as online activists and putting our own security and that of our family members in jeopardy. I was in contact with some of the imprisoned activists for months; many were subsequently forced to flee the country or to go into hiding. 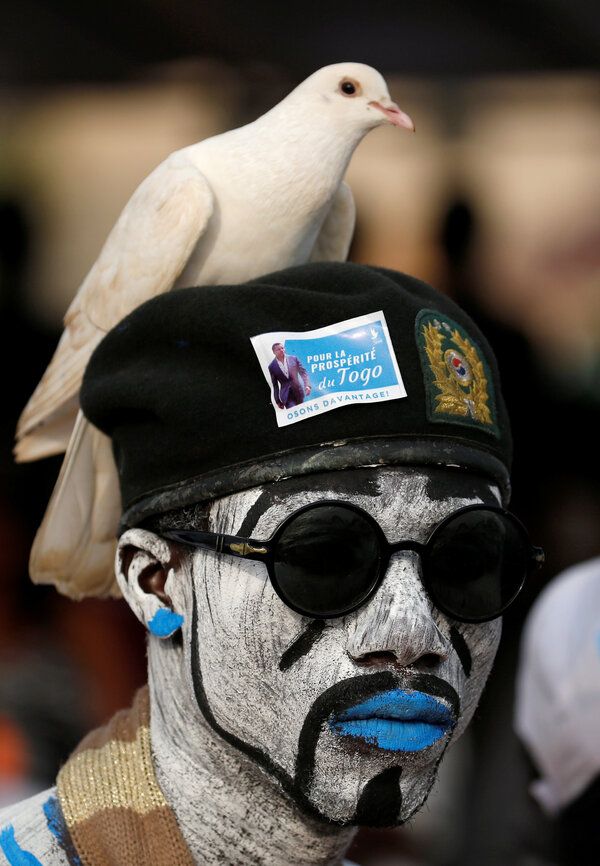 Thanks to a 2018 investigation by Citizen Lab, a cybersecurity research group based at the University of Toronto, we later discovered that a spyware program known as Pegasus was likely being used by the Togolese government to target smartphone users in the country. We believe the regime has used this program to attack the electronic devices of Togolese dissidents.

Pegasus is a product of the NSO Group, an Israeli company that has sold the surveillance technology to numerous governments around the world, solely, the company said, to aid in the fight against terrorism and crime. However, multiple allegations have emerged that the governments in question, some of them with poor human rights records, have also used NSO spyware to target activists, journalists and other civil society leaders. NSO is essentially selling arms to authoritarian governments, fueling abuse and oppression as it puts profits before human dignity.

By late 2018, the Togolese regime had managed to consolidate power by repressing protests and by organizing parliamentary elections under dubious conditions (which the opposition boycotted). It also passed a new cybersecurity law curtailing freedom of expression. As a result of the elections, President Gnassingbé gained the control he needed in Parliament to modify the constitution in his favor: A law passed in 2019 reinstituted the term limits eliminated by his father — a major demand of the opposition — but it did so while ignoring the three terms Mr. Gnassingbé had already served, potentially allowing him to rule Togo until 2030.

Other West African leaders, including Alpha Condé of Guinea and Alassane Ouattara of Ivory Coast, have recently followed in Mr. Gnassingbé’s footsteps by claiming that constitutional changes within their countries have essentially reset the term-limit clock to zero. (It is perhaps no surprise that the 2018 Citizen Lab report found potential Pegasus infections in Ivory Coast.)

When Mr. Gnassingbé ran for a fourth term in February 2020, the opposition had only a microscopic chance of winning. The regime, which retained control of the legislature, barred election monitoring groups from operating in Togo and deployed security forces across the country. Mr. Gnassingbé declared victory with 72 percent of the vote, surpassing his percentages in the 2005, 2010 and 2015 elections, amid further allegations of fraud made by the opposition.

Recent investigations by Citizen Lab and others have revealed that yet more government critics in Togo, including prominent Catholic leaders, have been targeted by NSO surveillance software, as part of an attempt to monitor their conversations and movements. The government seems to have succeeded at maintaining its grip on power in the face of mass protests. The Gnassingbé dynasty, in power for over a half-century, continues.

Yet the thirst for democracy in Togo is stronger than ever. The resistance must now go beyond holding authoritarian regimes accountable and demand that tech companies like NSO also be held responsible for the resources they provide to these governments.

The Togolese regime is ignoring a crucial truth: The internet has given the younger generation a taste of freedom — and once people know what it feels like to be free, they can no longer be held in bondage indefinitely.

Farida Nabourema is the executive director of the Togolese Civil League, a nongovernmental organization promoting democracy and the rule of law in Togo, and the spokesperson for the Faure Must Go movement.