“It is sad indeed that partisan politics has become irrationally intertwined with public health, but that is the state of affairs in America today,” a reader writes. 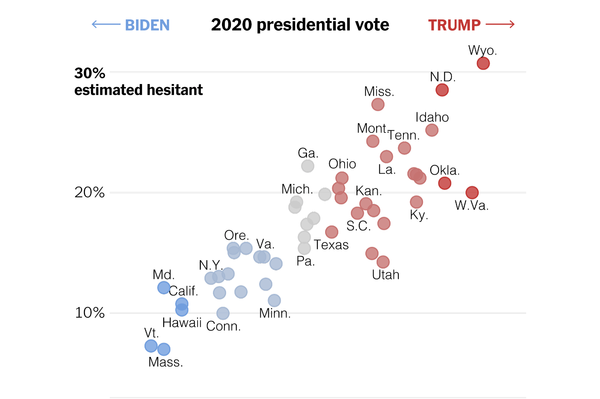 A better and faster way to overcome resistance from those who do not want to get vaccinated would be to incentivize them to do so rather than trying to convince them.

There are many ways this could be done. One would be to offer a small, one-time tax break for getting vaccinated. Another way would be to get major corporations involved. For instance, the airlines could offer a rebate on ticket prices, or free baggage checks or a faster priority check-in line. Health care underwriters could offer premium reductions.

I am sure other people could come up with many more creative ideas. The bottom line is that these measures would result in far more people being willing to get vaccinated, they would cost infinitely less than treating tens of thousands more victims of Covid and they would help to accelerate a return to normal activities throughout the country.

We should enlist famous people such as actors, singers, musicians and sports figures to volunteer time to go to the vaccination area of their choice where there are pockets of unvaccinated people and be there to meet and greet people who show up to get vaccinated.

I think many of them would be happy to give back to the community to help our nation reach herd immunity.

Re “What Least Vaccinated Counties Have in Common: Trump Voters” (news article, April 22):

I’m reluctant to offer any criticism of The Times considering the vital role it plays in our nation, especially in its coverage of the pandemic. However, I’m wondering what is accomplished by your recent emphasis on the reported correlation between how people voted in the presidential election and their vaccine hesitancy.

Isn’t it more likely that folks who are hesitant, but might be persuaded to get vaccinated, will instead ultimately join those who have similar political views and who have decided against getting one of the available vaccines?

President Biden was vaccinated in front of a national TV audience. In January before he left office, Donald Trump was vaccinated behind closed doors. Lack of a Trump vaccination photo likely resulted in thousands of hospitalizations and many deaths, as Trump voters are more likely to avoid vaccinations.