Jan. 23 was the anniversary of the lockdown in Wuhan, the first coronavirus lockdown anywhere in the world, and ahead of the occasion, the Chinese government ramped up efforts to showcase its triumph over that initial deadly outbreak.

Within weeks of the new coronavirus’s emergence last year, China began to report a dramatic drop in the number of confirmed cases. Then it put in place a “zero-infections” policy: The detection of even one case could instantly trigger aggressive quarantines, punishing travel restrictions and mass testing and contact tracing until the number of cases went back to nil.

By its own telling, the Chinese government has done very well, with daily infection figures nationwide rarely exceeding 100 between March 7, 2020, and Jan. 8, 2021.

Some will doubt the reliability of China’s official statistics, especially given the authorities’ initial efforts to suppress essential facts about the virus’s appearance in Wuhan last year. But even if these figures are somewhat exaggerated or somehow skewed, and even considering the worrisome spate of new outbreaks in China recently, there is ample reason to believe that China really has done much better at containing the spread of the virus than other major economies. For example, papers published in Nature Medicine and JAMA Network Open, based on widespread antibody tests between March and May, confirmed low levels of infections in Wuhan and other Chinese cities at the time.

Only, China’s comparative success now risks hurting the country. Having been largely spared by the pandemic, most Chinese people remain susceptible to infection, and yet some seem disinclined to get vaccinated because of a false sense of safety. In addition, the Chinese government is over-exporting vaccines made in China.

In September, Caixin magazine published a survey of nearly 1,900 Chinese people in six provinces: Less than one quarter of the respondents said that they agreed or strongly agreed with the statement that they, their relatives or their friends were at risk of contracting Covid-19. Granted, this study was conducted before two Chinese vaccines were approved for general use and before the flurry of current outbreaks, but more recent findings are consistent. 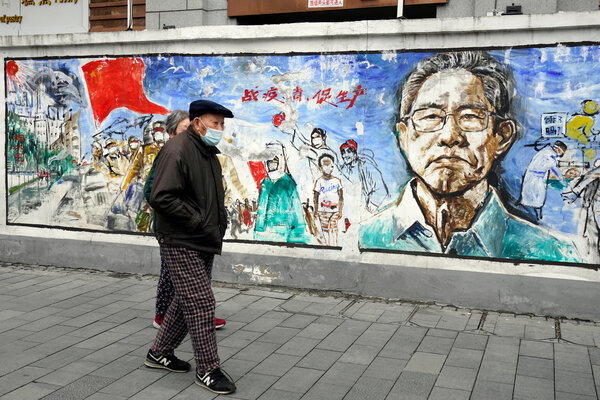 A survey by Ipsos for the World Economic Forum in December examined confidence in Covid-19 vaccines in 10 countries of the Organization for Economic Cooperation and Development and five emerging economies. Some 80 percent of the Chinese respondents said they would take a vaccine if available. And of those who said they wouldn’t, some 70 percent mentioned concerns about side-effects, a result in keeping with the answers given by the other groups surveyed. Notably, however, some 32 percent of the Chinese vaccine-hesitant cited “not being enough at risk from Covid-19” as the main reason for their reluctance — the highest such figure in the study.

“I will not take it unless it is mandatory,” a friend of mine who lives in Shanghai told me recently about getting a vaccine. “The chances of infection here are very small.”

A columnist for The Paper, on online publication that takes on controversial subjects, recently argued that Chinese people’s intent to get vaccinated would only drop further as vaccination is rolled out, because they would feel even safer.

Also remarkable: Only 16 percent of the Chinese respondents in the Ipsos-World Economic Forum survey who were vaccine-skeptics said they were skeptical because of concerns over the vaccines’ effectiveness — that was the lowest such percentage among all the groups surveyed.

This fact is all the more noteworthy that China has been rocked by major food- and health-safety scandals over the years: involving rice contaminated with cadmium, baby formula laced with melamine — and at least half a dozen shoddy vaccines. Yet those precedents do not seem to be shaping current views.

If anything, too, popular social media platforms such as Weibo, WeChat and Bilibili are awash with posts and articles peddling conspiracy theories — some promoted by Chinese officials — about the vaccines developed in the West: Those contain mercury, and deliberately; they may modify human genes.

In a survey by the local government of Changzhou, a city in the coastal province of Jiangsu, in November and December, 79 percent of respondents said they would be more inclined to take vaccines made in China, compared with 7 percent who said they favored foreign ones. According to a series of online surveys of urban residents throughout China conducted by the China Data Lab at the University of California-San Diego, the Chinese public’s trust in both the central government and local authorities increased during the first half of 2020.

People’s sense of safety seems to be both shaped and shared by public health experts. Wu Zunyou, the chief epidemiologist of the Chinese Center for Disease Control, claimed in late December that “the chances of infection are very small.” Zhang Wenhong, a leading infectious disease expert who has become something of a small celebrity thanks to his plain talk, said last month that there was no urgency to roll out mass vaccination because “China has done the best job of any country in Covid control.”

The government recently announced a nationwide drive to vaccinate 50 million people from high-priority groups — essential workers, doctors and border-inspection personnel — ahead of the Lunar New Year, a major travel rush, next month. After that, it envisions inoculating all “eligible people,” a category that excludes anyone who is pregnant, breastfeeding or immunocompromised, as well as people younger than 18 or older than 59.

The decision to leave out for now the older members of the population may seem curious, considering that Covid-19 kills more of them, but the decision appears to be informed by a dearth of clinical data about any possible side effects of vaccination in that age tranche. Partly as a result, though, the inoculation campaign, even in its second stage, will exclude at least 35 percent of the population.

Based on a study about the virus’s transmissibility that was published in The Lancet in November, among other things, I calculate that, in order to achieve herd immunity, China would need to vaccinate at least 66 percent of its population with vaccines with an efficacy rate of at least 91 percent. Since Covid-19 vaccination usually require two shots, China would have to deploy 1.85 billion doses.

But 91 percent is the highest efficacy rate ever reported (in a trial in Turkey) for the vaccine made by Sinovac, for example; researchers in Brazil recently placed the figure at just above 50 percent. And China has only enough manufacturing capacity for a maximum of 1.8 billion doses this year.

What’s more, perhaps because the Chinese government itself also perceives the risk of mass infections to be low, it seems to be over-exporting vaccines made in China in a bid to expand its influence internationally. By early January, the two major Chinese vaccine makers, Sinopharm and Sinovac, had sold overseas or received international orders for more than 800 million doses. (China has plans to purchase 100 million shots from abroad, but that won’t be enough to bridge the gap between supply and need.)

Against this backdrop, relaxing the zero-infections policy appears to be out of the question. Lu Hongzhou, a co-director of the Shanghai Public Health Clinical Center at Fudan University, told Chinese media recently that the policy should be maintained “at all costs.” Back in September President Xi Jinping had instructed, “by no means should we give up halfway through the hard-won achievements of epidemic control.”

The benefits have been real: in terms of lives saved, of course, and also in terms of politics, economics and prestige. To some, China has come to seem as something of a “new safe haven”; it was also the only major economy to register growth last year.

But these achievements put a tremendous amount of pressure on both the state and the public to maintain hugely onerous coronavirus control efforts, even as those may become harder and harder to sustain.

An acquaintance of mine, the director of the health commission of an eastern city of some 300,000 residents, said on WeChat recently that she “tread as if on thin ice and sat as if on pins and needles” when it comes to enforcing the government’s no-tolerance policy.

Because the virus is highly transmissible and spread largely by asymptomatic carriers, just one undetected case can promptly kindle a new outbreak. The recent flare-ups in several cities in northern China are the largest outbreaks in the country since the original one in Wuhan a year ago. A lockdown has been imposed since early this month on about 60 million people in Heilongjiang and Hebei Provinces — nearly the equivalent of the entire population of Italy.

Things will probably only get more complicated for Chinese health officials like my acquaintance if countries in the West, having pushed much harder than China on mass-vaccination efforts (if rather shoddily at times), reach herd immunity before it does. That so-called immunity gap could undermine China’s approach, especially if the government decides to keep the country’s borders closed on public health grounds after life returns to semi-normal elsewhere in the world.

China’s comparative success at containing the coronavirus has put it in a bind: The population feels much safer than it should even as it remains very vulnerable to infection and is likely to for quite a while longer.

Yanzhong Huang is a senior fellow for global health at the Council on Foreign Relations and a professor at Seton Hall University’s School of Diplomacy and International Relations.