It is a tale of two worlds. In one, Americans are afraid, and preparing for a long, dark winter. The coronavirus is surging across the country with record case counts and increased hospitalizations. There is, once again, talk of hospitals reaching capacity and exhausted health care workers. In an ominous turn, top health officials are suggesting that perhaps it is time to mandate the wearing of masks.

In the other world, the president and the vice president (who despite his chief of staff and other top aides having contracted the virus is not quarantined) are holding huge campaign rallies, claiming a rounding of the corner with regard to the virus and even mocking the attention paid to the pandemic. In clear defiance of C.D.C. guidelines, supporters are packed in like sardines and largely maskless at these rallies.

On Sunday, Mark Meadows, the president’s chief of staff, stated what is becoming increasingly obvious: “We’re not going to control the pandemic.”

The administration is showing wanton disregard for the health and well-being of the American people. It is up to the voters now to demand a new direction, to say that 225,000 dead (and counting) is not acceptable and to insist that our leaders determine to try to “control the pandemic.”

Language describing the Trump administration’s approach to the virus as “downplayed,” “cavalier” or a “verbal shrug” imply passive incompetence instead of calculated deception.

As confirmed by President Trump’s taped comments to Bob Woodward, this administration made a political decision in the early stages of the pandemic that manipulating re-election imagery was more important than saving lives.

While medicine and science race for a vaccine and improved treatment options, the president determined that getting re-elected was more important than driving down the infection rate with an evidence-based public policy of lockdowns, social distancing and masks.

The virus has proved itself immune to Mr. Trump’s “optics is everything” blizzard of disinformation. Voters are now rendering their judgment, as will history.

It really outraged me to learn that Vice President Mike Pence has decided that it is “essential” that he keep working (campaigning). He is the head of the White House Coronavirus Task Force. What message is he sending to the nation by knowingly going out in public after he has been exposed to the virus rather than quarantining? And since when is campaigning an essential business?

I think that the governors of the states he is campaigning in should not allow him to get off his plane. Let’s hope the last-ditch politicking by Mr. Pence does not result in superspreader events. 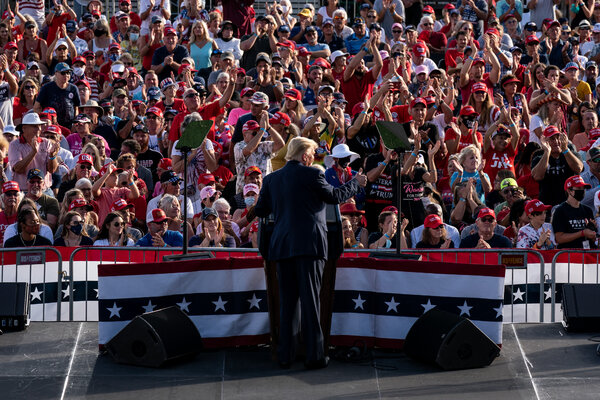 As a pulmonary physician who subspecialized in airborne respiratory infections, I was shocked by an image of a rally President Trump held at The Villages, a retirement center in Central Florida. Your photo shows a large crowd that includes many elderly people tightly packed together, many of them without masks. It shows a breeding ground for Covid among a highly vulnerable elderly population. It shows a whole new order of risk compared with Mr. Trump’s other rallies.

After age 50, the risk of death after a Covid-19 infection increases sharply. If Mr. Trump knowingly places his own base at such deadly risk for a self-serving reason (re-election), how can we entrust him with our country?

In late July and August, in the throes of political despair, I gave in to my need for some reason to believe in democracy again. I returned to Aaron Sorkin’s “West Wing,” if only to corroborate my childish dream of decency in presidential leadership.

Beginning with Season 1, I was immediately immersed in the idea that competent, intelligent leadership can save the country from its worst inclinations. By Season 2 my sleeping became less restless and my general attitude less cranky. By the end of the last season, as the first Hispanic president takes the oath of office, I was strengthened, prepared for the onslaught to come.

“The West Wing” worked as the useful opiate for an unmoored soul.