Before Xinjiang, there was Tibet. Repressive policies tested there between 2012 and 2016 were then applied to the Uighurs and other ethnic minorities in northwestern China: entire cities covered in surveillance cameras, ubiquitous neighborhood police stations, residents made to report on another other.

Now that process also works the other way around. Xinjiang’s coercive labor program — which includes mandatory training for farmers and herders in centralized vocational facilities and their reassignment to state-assigned jobs, some far away — is being applied to Tibet. (Not the internment camps, though.)

Call this a feedback loop of forcible assimilation. It certainly is evidence of the scale of Beijing’s ruthless campaign to suppress cultural and ethnic differences — and not just in Tibet and Xinjiang.

I analyzed more than 100 policy papers and documents from the Tibetan authorities and state-media reports for a study published with the Jamestown Foundation this week. Photos show Tibetans training, wearing fatigues. Official documents outline how Beijing is rolling out for them a militarized labor program much like the one in place in Xinjiang: Tibetan nomads and farmers are being rounded up for military-style classes and taught work discipline, “gratitude” for the Chinese Communist Party and Chinese-language skills.

More than half a million workers have been trained under this policy during the first seven months of the year, according to official documents.

Reuters has confirmed these findings, uncovering more relevant documents. (The Chinese government has denied the charges, including that it is enlisting forced labor in Tibet.) 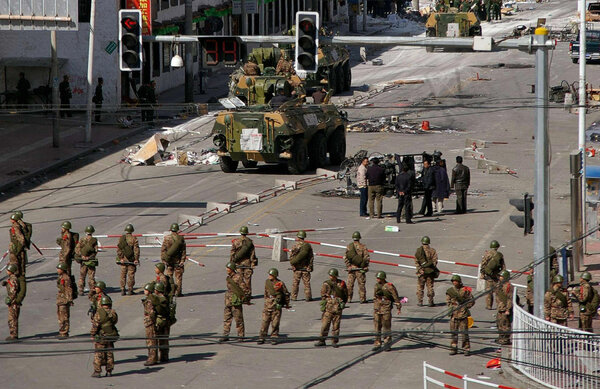 Tibet has long posed a particular challenge for the Chinese authorities. The region is very far from Beijing and strategically important because of its long border with India. Its people’s culture is distinct, and the devotion of many Tibetans to the Dalai Lama, who simultaneously embodies religious and political power — with a government in exile in India — is a double threat in the eyes of the Chinese Communist Party.

Tibet’s people — about 3.5 million, mostly nomads and farmers scattered throughout the vast Himalayan plateau — have resisted Beijing’s encroachment for decades. Notably, riots broke out in the capital, Lhasa, in 2008, just weeks before the Olympic Games in Beijing, following years of tightening restrictions on cultural and religious freedoms.

There reportedly have been more than 150 cases of self-immolation carried out in protest since 2011. (Chinese troops patrolling Tibet carry fire extinguishers as part of their riot-control equipment.)

The Dalai Lama is 85, and the Chinese authorities in Beijing have been trying to shape his succession, asserting, for example, that Buddhist reincarnations must “comply” with Chinese law.

This is but one of the many ways in which Beijing has been doubling down on imposing state controls over Tibetan traditional ways of life.

Tibet, like Xinjiang, nominally is an autonomous region, yet in 2019, its government mandated that all Tibetan nomads and farmers be subjected to what some government directives call “military-style” training for vocational skills and then be assigned low-skilled jobs, for example in manufacturing or the services sector.

Some of the reports I have reviewed, including one by Tibet’s Ethnic Affairs Commission, claim that Tibetans’ religion cultivates “backward thinking.” The city of Chamdo claims to have “carried out the transfer of surplus labor force in agricultural and pastoral areas” in order to overcome Tibetans’ purportedly “poor organizational skills.”

According to a major policy paper by the Tibetan regional government, “The 2019-2020 Farmer and Pastoralist Training and Labor Transfer Action Plan,” the military drill-style skills training, coupled with what the government calls “thought education,” will supposedly compel Tibetans to voluntarily participate in the poverty alleviation efforts prescribed by the state.

As of this year, Tibet’s labor plan has explicitly included the transfer of Tibetan workers to other parts of China, with target quotas for each Tibetan region. Local officials who fail to meet those quotas are subject to punishment.

The main action plan also states that Tibetans are to be “encouraged” to hand over their land and herds to large-scale, state-run cooperatives and become shareholders in them. One state-media account from late July about progress with poverty alleviation describes the program as an effort to get Tibetans to “put down the whip, walk out of the pasture and enter the market.”

Becoming wage laborers forces Tibetans to give up herding and farming, and cuts them off from ancient traditions and sacred landscapes. And that’s just the point.

Many of the program’s main features, and objectives, bear a striking similarity with the plan in place in Xinjiang.

So do other measures designed to marginalize Tibetan culture.

For example, Beijing has drastically accelerated in recent years its efforts to minimize the teaching of the Tibetan language, including outside Tibet.

In late 2015, Tashi Wangchuk, a Tibetan from the remote nomadic region of Yulshul in Qinghai Province, tried to sue his local government over the curtailment of Tibetan language education. In 2018, he was sentenced to five years in prison for “inciting separatism.”

I reviewed official recruitment notices for teaching jobs in Yulshul and noticed that the number of advertisements for posts for Tibetan and subjects to be taught in Tibetan declined by 90 percent between 2014 and 2019.

Between 2010 and 2018, other Tibetan regions in Qinghai had recruited as many teachers for subjects taught in Tibetan as for subjects taught in Chinese. But in 2019 and this year so far, those regions advertised more than three times as many teaching positions for classes taught in Chinese than for classes in Tibetan. Similar shifts have happened in other Tibetan areas of China, like Ngawa Prefecture in Sichuan Province.

Tibetan Buddhism is also under attack. In the spring of 2019, the mayor of Lhasa claimed that the year before “the number of days major religious activities were held and the number of people attending them both reduced to below 10 per cent.” Last fall, Beijing started forbidding former government officials from practicing circumambulations at sacred sites.

The authorities of the Chamdo region of Tibet, after announcing in 2017 plans to set up video surveillance systems in main Buddhist temples, have spent 275 million yuan (more than $40 million) on a cloud computing system that enables, among other things, what they call “intelligent temple management” — a euphemism for comprehensive digital surveillance and control.

This strategy has old roots.

Back in 1989, the eminent Chinese anthropologist Fei Xiaotong wrote that through a long process of “mixing and melding,” the Han majority and other ethnic groups in China would eventually combine into a single entity: the Chinese nation-race. In Fei’s view, the Han would be at the center of this fusion, because they were the superior culture into which so-called backward minority groups would inevitably assimilate.

The Chinese government adopted Fei’s vision, and for a time tried to help it along with a large dose of top-down economic development.

In 2000, President Jiang Zemin launched the Great Western Development Campaign, bringing infrastructure — and numerous Han — to the western part of China. Local ethnic minorities would benefit from the new economic activity and employment opportunities so long as they were willing to assimilate culturally and linguistically.

Many resisted. Local expressions of ethnic identities flourished. Tibetans and members of other minority groups flocked to schools that taught their languages, and kept their distinct religions alive.

In a speech in the fall of 2019, President Xi Jinping reaffirmed Fei’s vision of ethnic fusion. But Beijing’s means to achieve it have changed.

Forget organic and voluntary assimilation facilitated by economic incentives; now, minorities, especially in Tibet and Xinjiang, are being forced to comply by way of intrusive micromanaging by the state — a police state — armed with sophisticated surveillance systems, detailed databases and intense forms of social control.

Today, poverty alleviation, a pet project of Mr. Xi’s, is a cover for reshaping not only people’s livelihoods, but their entire lifestyles — their languages, religions, cultures and families.

In both Xinjiang and Tibet, teams of government officials are inserting themselves into homes. They are paired with and assigned to households, and work, eat and sleep with the people who live there.

Every Tibetan has a detailed file showing their income, employment status — and the state-approved solution for their situation. Tibetans who are sent to labor in workshops, often far from their families and places of worship, are easier to control. The children they leave behind grow up in boarding schools.

The purpose of these policies is clear, as are the stakes, and targeted groups are trying to push back. The central government’s recent efforts to replace Mongolian with Chinese as the main teaching language in schools in Inner Mongolia has triggered major protests there.

In Fei’s vision, ethnic fusion would happen slowly, naturally. That has failed. In Mr. Xi’s vision, the assimilation of minority groups must be coerced by the state. That, too, will fail.

Adrian Zenz (@adrianzenz) is a senior fellow in China Studies at the Victims of Communism Memorial Foundation, in Washington, D.C.