After January 6, the capital welcomed a solemn and safe transfer of power.

Mr. Winter is a staff photographer on assignment in Opinion. Mr. McCreesh is an editorial assistant for the Opinion section.

WASHINGTON — It was eerie, after Jan. 6, when the hush first fell. Troops plodded through posh neighborhoods, and military vehicles blocked some streets. Storefronts remained as shuttered as ever, and then the National Mall became off limits, too. Imperious black fencing already surrounded the White House, and now concertina wire encircled the Capitol. But when the inauguration finally arrived, the silence wasn’t so foreboding. Actually, it was kind of nice.

This last year in D.C. was, if anything, loud. Washingtonians felt the heat of the flames lapping at St. John’s Church this summer; watched Proud Boys yuk it up at the Washington Monument on July 4; heard the roar of the mob that stormed Congress, and tasted tear gas on both ends of Pennsylvania Avenue. 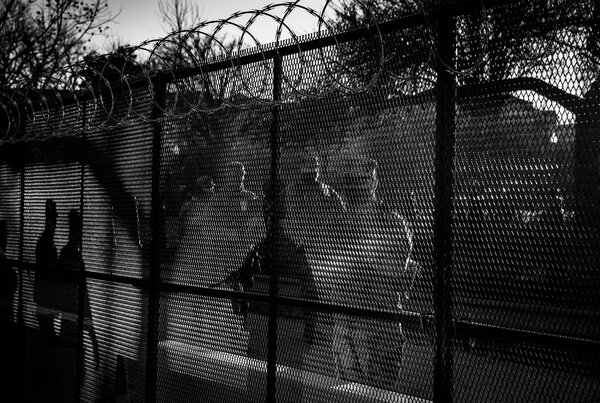 So, after all that noise, the difference in decibels on Wednesday felt appropriate somehow. It wasn’t an interregnum — power was transferred, however begrudgingly — but a moment to pause, breathe and reflect. The solemnity felt antithetical to everything that had preceded it.

“It’s different, but everything will handle itself,” said Anthony Petteway, 61, who was selling Biden and Harris merchandise on a barren corner in the Dupont Circle neighborhood, far from the Capitol, where he ordinarily sets up shop. “The big bad wolf is gone,” he said.

There was no revelry spilling onto the avenues, since bars and restaurants were closed for indoor dining. The major thoroughfare of 14th Street was so desolate that I half expected to see a tumbleweed. A few intrepid residents, decked out in spangly get-ups, braved the cold for lunch at the few places that offered outdoor seating. It was weird, but given what this country is up against, wouldn’t the usual spectacle of the beau monde descending for bloated inaugural bonhomie have been bad, too?

Atop the Cairo, said to be the tallest residential building in the District, one could see fireworks and the many beams of light along the mall, standing in for President Biden’s crowds, refracting off all the white marble and shooting into the cosmos.

When Donald Trump called this city a “majestic place” in his taped farewell address, he was telling the truth.

Damon Winter is a staff photographer currently on assignment for Opinion. He received the 2009 Pulitzer Prize for feature photography. Shawn McCreesh is an editorial assistant for the Opinion section.