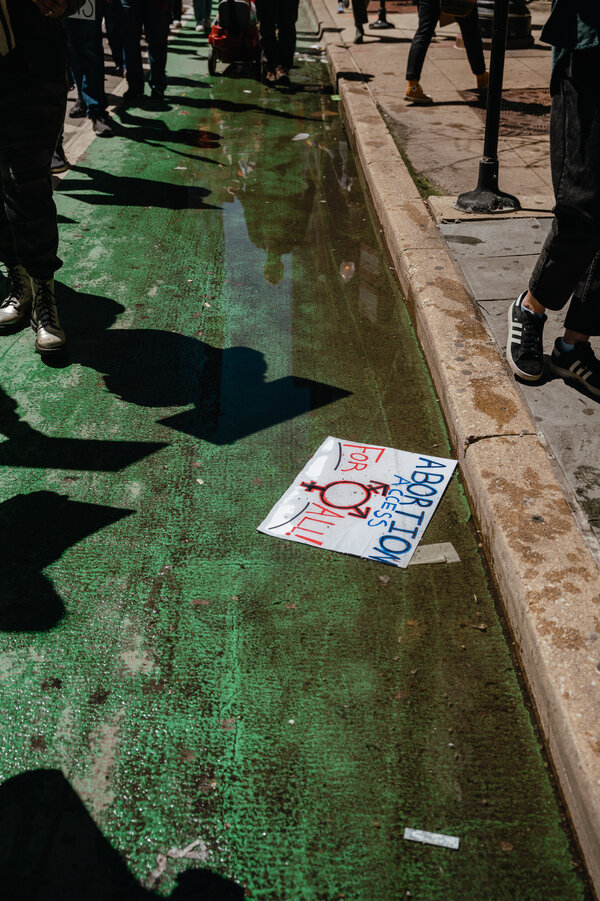 By Thomas B. Edsall

Abortion, it almost goes without saying, is a singularly fraught issue. Pew Research describes the complexity in a May 6 report, America’s Abortion Quandary: “A majority of Americans say abortion should be legal in all or most cases, but many are open to restrictions; many opponents of legal abortion say it should be legal in some circumstances.”

Pew continues: “Relatively few Americans on either side of the debate take an absolutist view on the legality of abortion — either supporting or opposing it at all times, regardless of circumstances.”

A majority of the Supreme Court, however, appears to be prepared to take on this unwieldy, intensely personal subject by overturning the 1973 landmark decision Roe v Wade. “We hold that Roe and Casey must be overruled,” Justice Alito wrote in a draft opinion supported by four other justices: “It is time to heed the Constitution and return the issue of abortion to the people’s elected representatives.” The decision as written would in fact transfer jurisdiction over the laws governing abortion to the states, 26 of which “are certain or likely” to adopt laws banning “abortion and those abortion bans would apply to both procedural and medication abortion,” according to the Guttmacher Institute.

In a May 3 interview with the Harvard Gazette, Laurence Tribe, a law professor at the school, argued that the public image of the Supreme Court has been badly “damaged by the obviously partisan divisions within the court” and exacerbated “by the court’s ham-handed attempts to persuade people that the political and ideological orientation of justices on the right or on the left somehow has nothing to do with the way they view legal issues.”

Tribe described the Alito draft as “a savage attack” on the Roe decision and while it may yet be moderated, Tribe said,

I think it’s important for people to recognize that the thrust of the decision and the dramatic and radical approach it takes to interpreting the Constitution’s unenumerated rights, narrowly and stingily, will not depend on the tone. That is, the opinion, whether it’s delivered in a velvet glove or not, is going to be an iron fist. The court is really announcing that it’s laying down the gauntlet with respect to rights like those recognized in Lawrence v. Texas, in terms of sexual intimacy, and Obergefell v. Hodges, in terms of the right to marry.

As long ago as February 2006, Ronald Dworkin, a law professor at N.Y.U. who died in 2013, anticipated in The New York Review of Books the probability that Alito would become a absolutist member of the Supreme Court’s conservative wing:

His dissent in Planned Parenthood v. Casey, the Pennsylvania case in which the Supreme Court later reaffirmed its earlier Roe v. Wade protection of abortion rights, was of course of particular concern. Alone on the Third Circuit Court of Appeals, he voted to uphold a provision of the Pennsylvania law that required married women to inform their husbands before seeking an abortion, except women who could prove that their husbands were not the father of the child or that they would be subject to physical abuse if they told their husbands.

At one level, the likelihood that the Supreme Court will overturn Roe v. Wade would seem to be an ideal vehicle to invigorate the left. Such a decision, in political terms, would amount to the imposition of a major change in social policy, by a bare 5 to 4 majority of an unelected court, against the will of the majority of the electorate.

In other words, at a time of growing anxiety over authoritarian trends in the Republican Party, the autocratic nature of a court decision jettisoning Roe has the potential to inflame an already divided nation.

“Research generally shows that anger is an emotion that mobilizes people to act, and many will certainly be angered by this decision,” Brian Schaffner, a political scientist at Tufts and at the Institute for Quantitative Social Science at Harvard, wrote by email in response to my inquiry. “We saw Republicans use the teaching of Critical Race Theory in schools as a way of mobilizing their supporters with anger in 2021, but overturning Roe seems quite likely to enrage a much larger share of the population and could lead to a much different calculus for what we might expect in November.”