Good morning. News accounts of the Capitol attack — many based on videos taken by rioters — are offering new details. 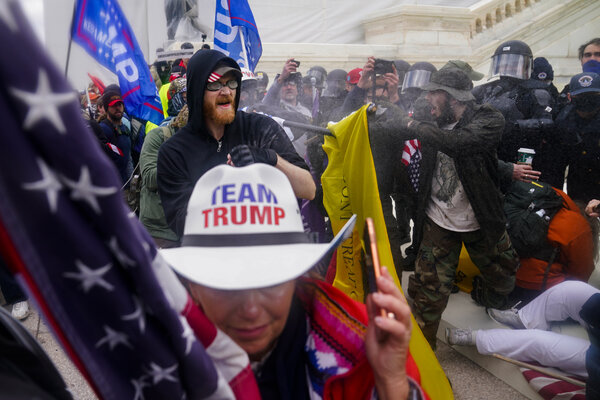 It’s hard to think of another crime that the perpetrators documented so thoroughly and publicly.

The people who participated in the Capitol attack on Jan. 6 posted thousands of videos of it to Parler, a social network. Journalists and other witnesses have released dozens of their own videos, too. Over the past several days, news organizations have been studying these videos and have begun releasing more details about what happened.

This reconstruction work is important, because the attack was a signature moment in U.S. history: A mob, incited by the president of the United States, stormed the halls of Congress in an effort to prevent it from certifying the president’s electoral defeat. During the attack, the mob killed a police officer and went looking for members of Congress.

Below, my colleagues and I have summarized the key points from the latest news accounts, and we’ve provided links for people who want to go deeper:

The mob came very close to lawmakers. At several points, rioters were within feet of members of Congress, separated by only a small group of police officers, a multimedia article in The Washington Post shows. Some rioters passed within 100 feet of Vice President Mike Pence, who was hiding with his family in an office near the Senate chamber.

Many of the attackers openly discussed committing violence, and lawmakers feared for their lives. “Drag them out!” one man yelled inside the Capitol, referring to lawmakers; another group chanted “Hang Mike Pence!” As the mob closed in, members of Congress hiding inside the House chamber called loved ones and told one another to remove their lapel pins so rioters could not identify them.

Rioters abused the police. One man, carrying an American flag, profanely yelled at a line of Washington police officers that his 5-year-old son was more of a man than they were. Others beat, knocked over and pushed past officers, and threatened to kill one with his own gun.

Police officers inside the Capitol were often outnumbered and chose not to use force. In the Post video, Officer Eugene Goodman, facing down a large group by himself, lured the mob to chase after him — away from the Senate chamber.

Later, after senators had evacuated, a lone officer politely pleaded with rioters to leave the chamber. “Any chance I could get you guys to leave the Senate wing?” the officer asks in video captured by The New Yorker’s Luke Mogelson. “Just want to let you guys know this is, like, the sacredest place.”

Only after the arrival of more backup, some from the D.C. National Guard, did officers end the riot.

Some rioters may have been collecting information. The New Yorker video shows a group of men rifling through Senate desks and snapping photos. One says he is looking for something to “use against these scumbags.”

The F.B.I. is also investigating whether a Pennsylvania woman stole computer equipment from Speaker Nancy Pelosi’s office and intended to sell it to Russian agents. The woman turned herself in to the police yesterday.

The mob felt empowered by Republican leaders. As rioters pushed their way down a hallway, one shouted at a police officer, “We are listening to your boss: Trump.” And as a few men looked through documents on the Senate floor, one, referring to Senator Ted Cruz, said: “I think Cruz would want us to do this, so I think we’re good.”

Multiple military members, active and retired, were part of the mob. The F.B.I. is investigating the role of the Oath Keepers, an anti-government militia made up largely of former law enforcement and military veterans. (In response, the Pentagon says it will intensify internal efforts to combat far-right extremism.)

Another rioter was Klete Keller, a gold-medal-winning swimmer. One of Keller’s former Olympic teammates described him as an “aimless, rudderless, 30-something man who … became a perfect candidate to fall into a radical, conservative rabbit hole of conspiracy theorists and rioters involved in insurrection,” according to The Post. Since the riot, Keller told a former coach that he “didn’t mean for any of this to happen,” The Times reported.

So far, at least 70 people have been arrested and charged with participating in the attack. The authorities say they are still seeking information, as this F.B.I. poster with suspects’ photos shows.

The Times put together maps, images and videos from the day to show how President Trump’s rally gave way to violence.

ProPublica collected more than 500 videos, offering a view of what the attack looked like from inside the mob.

Brazil started its vaccination campaign. The country’s death toll is second only to that of the United States.

Almost 400,000 people in the U.S. have died from the virus. President-elect Joe Biden will honor Covid-19 victims during a ceremony tonight at the Lincoln Memorial Reflecting Pool.

Times reporters researched the people who died on a single day in January — including a youth football coach, a police chief and a Disneyland photographer.

Steven Dillingham, the Trump-nominated director of the Census Bureau, resigned a year before the end of his term after claims that he politicized his role.

On his first day in office, Biden is expected to cancel the Keystone XL pipeline permit, as environmentalists had hoped he would.

The Trump administration released its “1776 Commission” report, which — among other things — likens progressivism to fascism. Historians derided the report.

Alex Padilla, who will fill Kamala Harris’s Senate seat, discussed impeachment and his status as California’s first Latino senator in an interview.

Trump is preparing pardons. Among those under consideration: the former New York Assembly speaker Sheldon Silver and the rapper Lil Wayne.

Trump wants to build a National Garden of American Heroes with statues of Whitney Houston, Dr. Seuss and Nikola Tesla, among others. (The project is unlikely to happen.)

The N.Y.P.D. arrested dozens of people who had gathered near City Hall in Manhattan for a march on Martin Luther King’s Birthday.

A Morning Read: Nine years ago, the rock climbing champion Lai Chi-wai was paralyzed from the waist down in a car accident. It didn’t stop him from trying to ascend a skyscraper.

From Opinion: Jamelle Bouie and Jennifer Senior have columns.

Lives Lived: Harry Joseph Brant was a founding member of the next-generation jet set and a new-look “It” boy known for pushing the boundaries of gender stereotype in both cosmetics and clothing. He died at 24.

Canada will finally have a champion

Canada invented the sport of ice hockey, and much of the country is obsessed with it. But the country’s professional teams have had a rough few decades: No Canadian team has won the Stanley Cup — the trophy that goes to the National Hockey League champion — since the Montreal Canadiens 28 years ago. Canada’s previous longest drought was a mere six years.

This year promises to be different. Even if an American team wins the cup, Canada will at least be able to crown its own champion.

Because the Canadian government has restricted travel to and from the U.S., where the pandemic is worse, the N.H.L. has reorganized its divisions — and has placed all seven Canadian teams in the new North Division.

The Canadian teams will play only one another during the regular season, and the top four will then meet in the playoffs this spring. Whichever team emerges — the champion of Canada — will face the three winners from the U.S. divisions in a Stanley Cup bracket.

“Every night is going to feel like Saturday night, ‘Hockey Night in Canada,’ coast to coast,” the general manager of the Calgary Flames told The National Post, referring to a popular television broadcast. “It may only be one season, but I think it’s going to be awesome.”

The season began last week, and oddsmakers like the Toronto Maple Leafs, who have famously struggled for much of the past half-century.

Into the Art World

Check out pieces being auctioned from the collection of a Beastie Boy’s mother.

In an interview, the designers Miuccia Prada and Raf Simons discuss working together.

Nordic skiing in rural Alaska is a healthy pastime and a form of transportation. Watch children learn to ski in the picturesque tundra.

The pangram from yesterday’s Spelling Bee was collectible. Today’s puzzle is above — or you can play online if you have a Games subscription.

A correction: Yesterday’s newsletter included the wrong location for an Egyptian hospital that had run out of oxygen. It was in El Husseineya, not Cairo.

P.S. Recent print editions of The Times have featured an usually high number of banner headlines. You can explore some of them — from the presidential election to the vaccine rollout and the Capitol riot — here.

Today’s episode of “The Daily” features conversations with Trump’s supporters about the Capitol riot. On the latest “Sway,” the actor Bryan Cranston breaks down his method.