A new president needs to make choices. Recent history suggests that an administration has only about a year to push major legislation through Congress before attention turns to the midterm elections (which rarely go well for the party in power). Any bill not at the very top of the president’s list is unlikely to happen.

For the past few decades, new presidents have focused on two issues above all others: taxes and health care. Bill Clinton and Barack Obama both made expanding access to health insurance their top long-term priority, with Clinton failing and Obama succeeding. George W. Bush focused on cutting taxes, and Donald Trump tried to cut taxes and repeal Obamacare.

President Biden will break this pattern.

His advisers are preparing a set of proposals intended to reshape the U.S. economy and other parts of American life. If they pass, they will almost certainly have a more lasting effect on people’s lives than the virus-relief bill that Biden signed two weeks ago. And while the proposals include measures on health care and taxes, they are broader — more diffuse, a critic might say — than the top priorities of other recent presidents.

During last year’s campaign, Biden described the package with the phrase “build back better.” It is an attempt to create a more prosperous, equal and sustainable economy. It’s the Democratic Party’s answer to decades of rising inequality and growing damage from climate change.

The virus-relief bill was “an emergency response,” as Senator Bernie Sanders says on the latest episode of Ezra Klein’s Times podcast. “Now we have to deal with the long-term structural problems facing our country that have long, long been neglected, way before the pandemic. And that is the need to rebuild a crumbling infrastructure, the need to address the existential threat of climate change, the need to create many millions of jobs, decent-paying jobs.”

The White House has not yet released all of the details, and they will probably change as the package moves through Congress. But here’s an overview of what we know about the major pieces. 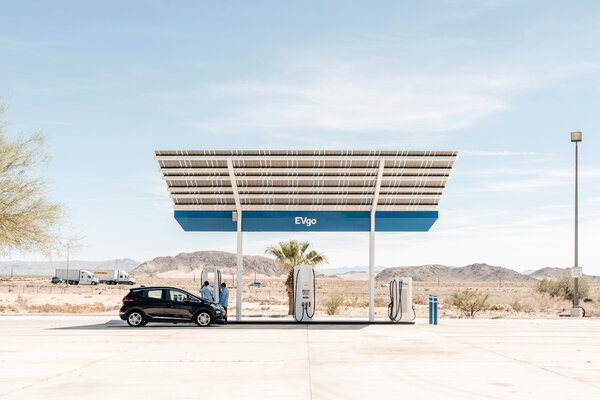 What Biden would do

Infrastructure. The centerpiece of the package is a set of proposals to improve the country’s infrastructure, including money for roads, bridges, broadband access and energy-efficient houses and electric cars. Many of the infrastructure provisions are “directly related to the fight against climate change,” our colleague Jim Tankersley told us. “Administration officials essentially see those two goals — building out 21st century infrastructure and transitioning to a low-carbon future — as inseparable.”

Representative Alexandria Ocasio-Cortez told The Times’s Lisa Friedman that she was encouraged by what she had heard about the infrastructure policies and likened them to her Green New Deal plan. “One of the big goals we had when we introduced the Green New Deal was to show how people thought about climate change from being a billion dollar problem to a trillion-dollar opportunity,” she said. “This infrastructure package generally seems to be shaping up in that kind of framework.”

Education. Biden wants to expand public education on both ends of the age spectrum. His plan is likely to make pre-K universal for both 3- and 4-year-olds, through federal funding of local programs, and would increase funding for community colleges. The ultimate goal is to move the public-education system from its current K-12 system to something that starts at age 3 and extends through two years of college.

Child payments and paid leave. The virus-relief bill included a few large items to help middle-class and poor families — but they all expire in the next year or so. This new package would extend a monthly child payment that starts at $250 per child for most families, as well as a big expansion of paid family leave. These provision would significantly reduce both economic and racial inequalities.

Health care. Biden’s plan would expand Obamacare by extending several two-year provisions in the virus-relief bill, The Times’s Margot Sanger-Katz says. It would cut costs for nearly every family that receives coverage through the law and expand subsidies to some making more than $100,000 a year.

The package may also include a measure to limit how much pharmaceutical companies can charge Medicare for prescription drugs, which could lead to lower prices for private insurance plans.

The plan does not appear to include another idea Biden has said he favors — expanding access to government insurance plans, through a public option or allowing younger people to buy into Medicare.

Lower prescription-drug costs would cover some of the package’s $3 trillion to $4 trillion in new spending over 10 years. But a bigger source of money would be higher taxes on the affluent — people making at least $400,000 a year — and on corporations.

Republicans are unlikely to support any such tax increases, which means Democrats would need to pass major parts of the package through a Senate mechanism known as reconciliation. Bills that go through reconciliation need only 51 votes in the Senate, rather than 60, to pass.

What’s next: Biden’s advisers are leaning toward splitting the package into two different bills, partly in the hope of securing Republican support for some of them.

That won’t be easy. Congressional Republicans have almost uniformly opposed the top legislative priorities of each new Democratic president over the past three decades.

U.S. health officials are questioning AstraZeneca’s vaccine trial results, saying that the company may have released outdated information that “may have provided an incomplete view of the efficacy data.”

Poorer countries could wait years for vaccines. That’s bad for everyone.

Some people who recovered from Covid say their sense of smell remains distorted.

A gunman killed 10 people at a grocery store in Colorado. A police officer who responded to the scene was among the fatalities.

A suspect is in custody. The authorities released no details about the gunman or the motive. Here’s what we know.

“We ducked and I just started counting in between shots, and by the fourth shot I told my son, ‘We have to run,’” one customer said.

The U.S., Canada, Britain and the E.U. placed economic sanctions on top Chinese officials over their role in human rights abuses against Uyghurs.

Senator Elizabeth Warren didn’t get a cabinet job, but she still wields influence in Washington.

Protesters have rallied across Britain in opposition to a bill that would give the police more power to crack down on nonviolent demonstrations.

The U.S. Supreme Court will review a case considering the death penalty for Dzhokhar Tsarnaev, one of the Boston Marathon bombers.

Since Ellen DeGeneres apologized over accusations of workplace misconduct, her talk show has lost about one million viewers, more than 40 percent of its audience.

“My small personal hell has an expiration date,” Michelle Goldberg, a Times columnist, writes about receiving the Johnson & Johnson vaccine.

Ancient: The oldest wooden sculpture is 12,500 years old. It’s teaching us about prehistory.

Lives Lived: Elgin Baylor played above the rim in a Hall of Fame career with the Lakers. His acrobatic brilliance foreshadowed the freewheeling shows put on by future N.B.A. stars. Baylor died at 86.

TikTok’s influence is selling thousands of books. Some enthusiastic readers — mostly women in their teens and 20s — are posting videos of themselves reading or recommending novels. Occasionally, they sob into the camera after a particularly devastating ending.

“It becomes this very emotional 45-second video that people immediately connect with,” the director of books at Barnes & Noble told The Times. “We haven’t seen these types of crazy sales — I mean tens of thousands of copies a month — with other social media formats.”

One example: “The Song of Achilles” by Madeline Miller. Sales spiked after a popular TikTok video last year, and the book is now selling roughly nine times as many copies a week as it was in 2012, when it won a prestigious fiction award. The book is currently third on the New York Times best-seller list for paperback fiction.

Seeing the potential, some publishers have begun paying — or sending free books to — users with large followings. The fees range from a few hundred to a few thousand dollars per post. For now, though, the majority of these videos remain unsponsored, happening organically.

What to Listen to

See the Meroe pyramids — around 200 in total, many of them in ruins — in Sudan.

The hosts talked about spring breakers in Miami.

The pangram from yesterday’s Spelling Bee was intimacy. Here is today’s puzzle — or you can play online.

If you’re in the mood to play more, find all our games here.

P.S. The Times’s newest class of fellows hails from 17 states and Puerto Rico, as well as Britain and Vietnam. One of them has a Ph.D. in physics.

Today’s episode of “The Daily” is about a food critic who lost her sense of smell. On the latest “Sway,” the artist Beeple — discusses NFTs.