Good morning. The Biden administration has a huge amount of work to do to get the virus under control. 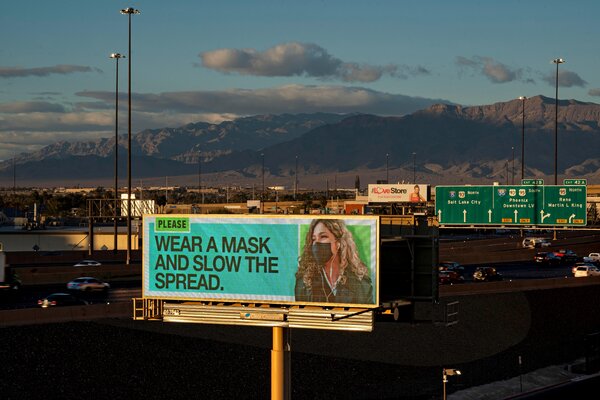 I took a 1,600-mile road trip this week that has left me even more amazed at how poorly the United States has handled the coronavirus — and more worried about how much work the Biden administration has to do to get it under control. I want to tell you that story this morning.

The U.S. now faces two main virus problems. First, our efforts to minimize the virus’s spread remain halfhearted, with many Americans refusing to wear masks or practice social distancing. Second, the early stages of the mass vaccination campaign have been a mess, far behind schedule and full of frustration for people trying to get shots.

The second of those problems was the reason for my road trip. I live in the Washington, D.C., area, where the vaccine rollout has been even slower than in most places.

I hear maddening anecdotes from neighbors and friends all the time, and I imagine you’ve heard similar anecdotes. Many Americans who qualify to receive the vaccine — like people over 65 — don’t know what they are supposed to do to sign up. When they try, they often find that all the slots are filled.

My mom, who’s 74 and has been living with my family for the last few months, was one of the people trying to figure out how to get her shot. And it felt impossible. Fortunately, she had an alternative. She normally lives in Colorado, a state with a somewhat better vaccine rollout. By checking repeatedly online, she got an appointment in Colorado.

So the two of us got in the car and spent a couple of days driving west (to spare her the risk of contracting the virus on a plane). My sister, who lives in Denver, drove east, and we met halfway, in St. Louis. I then drove back to Washington, and my sister and my mom drove to Denver. We are all grateful that she is about to receive her first shot.

But it’s worth pausing to reflect on what an indictment of our society this story is. The world’s richest, most powerful country has almost 20 million vaccine doses that are sitting unused. Meanwhile, people are desperately trying to sign up — and often failing. Many families don’t have the resources or flexibility to make it a full-time project.

For some, the consequences of the bungled rollout will be fatal. More than 3,000 Americans a day have been dying from Covid-19 recently. Some of them would not have contracted the virus if the Trump administration and state governments had kept the vaccination program anywhere close to on schedule.

President Biden announced his plans yesterday for a “full-scale wartime effort” to speed things up — including the construction of mass-vaccination centers, the involvement of drugstores and an accelerated manufacturing program. You can read the details here, as explained by The Times’s Sheryl Gay Stolberg. How well Biden succeeds will help determine how many Americans survive this pandemic.

The other big factor will be how hard the country tries to reduce the virus’s spread while the vaccines are being rolled out. In the short term, masks and social distancing probably matter even more than vaccines. “The brutal truth is it’s going to take months before we can get the majority of Americans vaccinated,” Biden said yesterday.

But I came home from my trip shaken by what I had seen.

Almost everywhere I stopped — gas stations, rest stops and hotels, across Maryland, West Virginia, Pennsylvania, Ohio, Indiana and Illinois — there was a sign on the door saying that people had to wear masks to enter. And almost everywhere, most people ignored the sign.

At a Fairfield Inn in Ohio, a middle-aged couple sat unmasked on a lobby sofa for hours, drinking beers and scrolling through their phones. The hotel staff evidently did nothing about it. At a convenience store in Indiana, a hand-drawn sign on the door read: “Face masks are required. Please do not enter without one!!” Customers did anyway.

Nationwide, about half of Americans are not wearing masks when in close contact with people outside their households, according to a survey released yesterday by the University of Southern California.

Wearing a mask isn’t much fun. It’s hard to speak clearly, and if you wear glasses, the fogging is annoying. But the inconvenience sure seems worth the benefits.

Study after study has shown that masks reduce the virus’s spread. Yet millions of Americans have decided they would prefer more Covid — for their communities and potentially for their families and themselves — to more masks.

The Biden plan to accelerate vaccinations looks promising, many experts say. But the new president does not yet have a cohesive plan for changing Americans’ minds about safe behavior in the meantime. Repeating the same pleas, like Biden’s request that people wear masks for his first 100 days, seems no more likely to work than the signs I saw on my road trip.

What might work better? Perhaps a prime-time Oval Office address that’s light on policy and focused on a simple call to action. Or maybe the calls to action can come from a diverse array of celebrities, politicians and business executives. As behavioral psychologists often explain, the messenger can matter more than the message.

For now, I feel like I just drove across a country that is losing a winnable fight.

A more contagious variant of the virus is forcing Britain’s hospitals to ration oxygen. “We’re practicing medicine in a way we never have,” one nurse said.

Dr. Anthony Fauci said that working with the Biden administration was “a liberating feeling.”

Biden is planning more executive actions today, including one that aims to send additional federal aid to families struggling to afford food.

Pete Buttigieg, Biden’s choice for transportation secretary, pledged to prioritize climate policy. Here’s how he could do so.

When the Bidens arrived at the White House, they briefly encountered a closed door — awkward. “The delay in opening the door did puzzle me a bit,” a former White House curator said.

Trump did what many older New Yorkers do: He retired to Florida. Not all of his Palm Beach neighbors are happy.

The first wave of Capitol riot arrests was easy, based on news accounts and social media. The next phase — proving a conspiracy — could be more challenging. (Here are some of the notable arrests.)

Suicide bombings killed at least 32 people in a crowded market in Baghdad.

A 19-year-old employee stole almost $1 million from a Kroger supermarket in Georgia over two weeks. He then went on a shopping spree for guns, shoes and cars.

Modern Love: A mother becomes her daughter’s dream partner in the pandemic.

From Opinion: Columns by Farhad Manjoo and Jamelle Bouie.

Lives Lived: Charles R. Saunders’s fantasy works reimagined the white worlds of Tarzan and Conan with Black heroes and African mythologies, giving Black fans of the “sword and soul” genre champions with whom they could identify. Saunders died in May at 73.

The rise and rise of “Drivers License”

Most songs that debut at No. 1 on the Billboard charts come from stars, who often benefit from coordinated efforts by superfans. How, then, has “Drivers License,” a brooding debut single by the 17-year-old actress Olivia Rodrigo, rocketed to No. 1, broken Spotify streaming records and reached the top spot on Apple Music in 48 countries?

The answer is a mix of old and new techniques. Rodrigo, who stars on a “High School Musical” spinoff series on Disney+, is following a path similar to those of acts like Demi Lovato and Miley Cyrus, who also had built-in fan bases from their Disney roles. The song’s lyrics, alluding to a love triangle involving a co-star, have helped too, fueling gossipy online chatter. And the song has received endorsements from Taylor Swift on Instagram and from TikTok tastemakers like Charli D’Amelio, helping it explode in popularity on the platform.

“TikTok videos led to blog posts, which led to streams, which led to news articles, and back around again,” Joe Coscarelli wrote in The Times. “The feedback loop made it unbeatable.”

This harissa Bolognese uses just one roasting pan — the pasta cooks directly in the sauce.

The final season of the French comedy “Call My Agent!” is on Netflix. Here’s our critic’s take.

The late-night hosts weighed in on Biden’s first day.

The pangram from yesterday’s Spelling Bee was plaudit. Today’s puzzle is above — or you can play online if you have a Games subscription.

And what do you think is happening in the photo below? Take this week’s news quiz, and see how well you stack up to other Times readers.

Thanks for spending part of your morning with The Times. See you Monday. — David

P.S. The word “manslipping” — about the tendency of men to let their masks fall below their noses — appeared for the first time in The Times yesterday.

Today’s episode of “The Daily” is about Biden’s initial actions. On “The Argument,” columnists discuss his economic plan.